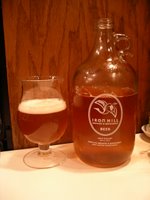 The Cannibal is described as a Belgian Strong Pale Ale style and is brewed at the West Chester, PA location of Iron Hill Brewery. It recently won a silver medal at the World Beer Cup event in Seattle, WA. This was purchased in a growler from the brewery and consumed roughly 4 hours later. Have you tasted this beer? Let us know what you think in the comments section and we'll move your comments up into the tasting notes. As a suggestion, try to keep the review as brief as possible for each of the following: appearance; smell; taste; mouthfeel; and drinkability. Appearance Bryan: a perfectly cloudy, pale gold pour with a short head; leaves a thin swirl with a lacey, bubbly rim Adam: cloudy? nah...clear, straw colored (tasted a day later) Smell Bryan: a typical Belgian with a clean, crisp, fresh aroma Adam: hint of fuit, crisp Taste Bryan: just a small hint of cloves and spice and a mild hop flavor; basically a solid Belgian Adam: yeah some spice, sweet start sour finish Mouthfeel Bryan: a very solid, medium body throughout; spreads nice and even through the mouth and down the hatch; just a bit of carbonation to bring some life to the beer Adam: not thin, substantial, and still good even after a couple days in the growler Drinkability Bryan: definitely pleasing; not in any way offensive or over-the-top; not sure about the silver medal status as a "strong ale", but definitely easy drinking Adam: a little better than not offensive, nice for spring Seconds? Bryan: don't know the alcohol level, but what the heck, give me a few! Adam: only two for me thanks
Written by Bryan Kolesar at Saturday, April 22, 2006

Too bad I am not organized enough to take notes while drinking beer... because I have tried this one about 3 times this month :-) I swear that earlier this month when I tried it, it was stronger and had more bite... but this Friday when I got it again, it was not as strong tasting. I love strong ales, and was pleased with this beer and am proud of the metal!