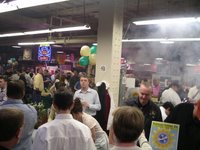 A beautiful day in Philadelphia brought a wonderful event to the historic Reading Terminal Market. Conceived by Bill Covaleski of Victory Brewing and delivered by the White Dog Café Foundation (both legendary in their own right), the Brewer’s Plate event was a sold-out gala for the second year in a row.

This event, as it suggests, celebrates local breweries and local restaurants who create beer and food which were carefully paired for the pleasure of the attendees. It was quite obvious that the brewers and the chefs were up to the challenge of bringing high quality products and serving them with pride. Case in point, check out the rightfully proud Tom Baker from Heavyweight here in the picture serving up just one of his brilliant brews, the Cinderbock Lager. 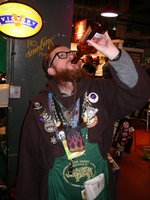 Oh, and I would be remiss if I were not to mention the ubiquitous beer pest Mr. Woody Chandler. Here’s a man so dedicated to his constituency, that he was personally acting as quality control tester for all of the breweries. As you can see from the picture, even the Golden Monkey from Victory received his personal attention; wow, whatta guy ;-) I get this sneaking feeling that this may turn out to be the most clicked-on picture at our site ever! So other than tasting great local beers and food, you may ask if I learned anything else useful that I can share with you....funny you should ask.

In an effort to get to the point (betcha thought I never would?!), the following is a quick hitlist of the breweries represented at this event. Then, a listing of the participating restaurants. Truth be told, this makes a nice little list of beer and food for visitors to the Philadelphia area. 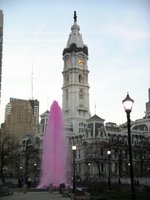 Lots of good info! I would have liked to experience the food pairings. That takes beer to a new level for me.