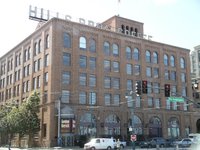 Run. Beer....Beer. Run....Pick an order....Well, maybe it should be run, then beer. (Although, the crazies at Hash House Harriers make a habit of mixing the two.)

That's how this happened to work out while in San Francisco. First, I punished myself with a 6-mile run through San Francisco that included the ubiquitous hills (including Lombard Street) and the scenery of Alcatraz, the bridges, and the Embarcadero. It was certainly one of the most diverse, interesting, and scenic runs that I have ever undertaken.

Oh wait, this is a beer writing, not running. (Note to self: update my running website!) So, I reached the end of my run near the bottom of the Embarcadero and, of course, I need to be replenished.

Oh wait, what is that? Yes, Gordon Biersch it is! 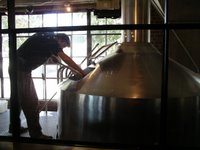 Now, my experience with GB up until this point has left me with somewhat of an ambivalent feeling. From my first experience with them 8 years ago at Candlestick Park with their garlic fries to their brewpubs in San Francisco, Pasadena, Atlanta, and Memphis....the beers have always been respectable and decent, 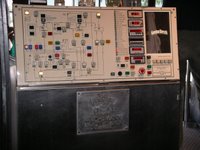 but not adventurous or great. Plus, they focus exclusively on lager-style beers, which for me are hit-or-miss.

There was something much different about this experience. Perhaps it was the runner's high that I was experiencing after a great run. Or maybe it was the friendly bar service that I received. Or maybe....just maybe it all started when I walked through the front door and was smacked righteously in the face with the sweet smell of barley.

Ah, the mashing was in full swing! I could practically taste the air. 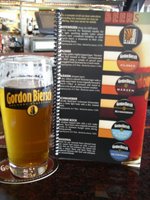 While at the bar, I had a great jambalaya dish full of meats and starches. And it washed down alternately with water, the Schwarzbier, and the Pilsner. Both beers were very good representations of their styles. Once again, perhaps I was just overly thirsty and hungry, but I really do think that these were both good beers without being overly lager-ish (like that?!)

Maybe it was the hops. They were certainly present in both beers; but, I was on the West Coast, eh?! Then, perhaps the icing on the cake was my introduction to Rich who was 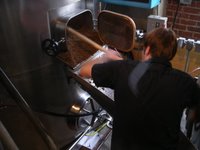 busy formulating, calculating, and making the Vienna Lager, if I remember correctly, or was it the Blonde Bock.

He graciously took the time to ask about my website and my beer preferences and favorites. Even though he was busy in the process, he pointed out the pieces of the German-installed brewing operation which is easily viewed from the bar area.

I mentioned to him how I thought his beers were very good lagers and described other good representations of the lager style on the East Coast, like Penn, Victory, and Brooklyn. He stopped back at the bar a couple of times and also made sure that I was familiar with the San Francisco Brewers Guild.

All in all, this was a surprisingly pleasurable stop at Gordon Biersch. The space that they occupy has two levels with large bar and dining areas. And, if you check out the last picture here, you will probably agree that they have one of the most scenic locations of any bar or brewpub in the country. 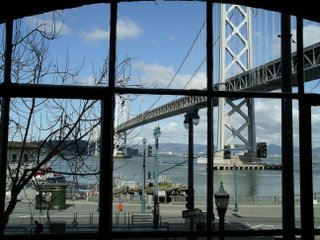