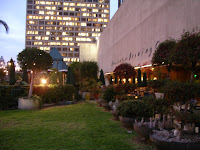 It's already out there; I've stated my underwhelming opinion of the downtown Los Angeles beer scene....or lack of it. Save for a couple of so-so beer bars, there may be only one other option, Bonaventure Brewing Company. The brewpub is located inside of the massive Westin hotel tower complex. Therein lies the rub...if you can find this place, then you might be able to enjoy a beer and the scenery. Allow me to explain.

{Skip down if you're not into rants} 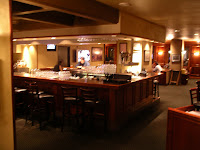 Already despondent over just a one-night trip to the West Coast and the bleak beer scene in downtown L.A., I set out in search of what I thought could be the only redeeming drop of better beer within walking distance. Since I already know that BBC is inside the Westin along Figueroa, getting to that point was a snap. This is where things get hairy. (Of course, finding my way out was much easier and provided me with a much clearer path to the pub if I should ever choose to go again.) Not only was the hotel missing any clear signs (or signs at all, from what I could gather) pointing folks to the brewpub, but even the concierge was convinced that I wanted to go to the steakhouse. "OH! You want to go to the brewery?"...he asked incredulously. sheesh...Perhaps this whole West Coast beer thing skipped L.A.

Complicating matters (yes, I'm still going to harp on the logistics of getting there!) were four elevator banks, which did not make a stop on the street level that I came in on (huh?), and various escalators and circular staircases strewn around, some with PhotoShop-looking homemade signs pointing people to businesses and services throughout the various floors of the shopping complex. I believe there were 4 shopping levels in all. I was confused. And, for any of you that know me, you're probably convinced it was truly confusing because of my natural propensity for maps and navigating. 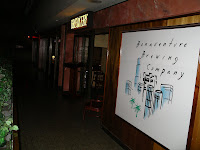 Ok, long story short for your benefit! If you go....come in off street level main entrance, hook a left on to the escalator, go up to the 4th floor, wind your way around to the right, follow the main concourse to {drum roll please} the storefront that has a neon sign glowing the word "brewery" above the door. If you try to take the elevator to the fourth floor (which you'd have to do from the lower level front desk area), you're screwed...it doesn't stop there. If you go to the left off the escalator, you're screwed...because the walk is at least twice as long going that way. If you're looking for signs, you're screwed...there are none. If you're looking for someone to help...ha! you're still screwed...even hotel personnel don't seem to know that this 8-year-old brewpub is there.

{Resume relevant beer message here}
Hello? Is anyone left reading this at this point? If so, you must either be laid up in a hospital bed with nothing better to do or you're a glutton for literary punishment. In any case, thanks for listening to the rant. The experience truly was frustrating. So I finally settle in for a beer. With four of their beers on draft and a few guest taps (on this day, Anchor Steam, Bitburger, and Hacker Pschorr Hefeweizen) , they had somewhat of an assortment. They also had a golden blonde, a pale ale, and a strawberry blonde of their own.

I only had time for one beer, so I settled on their house stout. It was described as dry and smooth, so I'm thinking something British-style as opposed to Old Rasputin RIS (saved for the next night at Four Points LAX). It turned out to be lacking some richer flavor qualities that I had expected. I found to be too cold, but it was indeed quite smooth (almost too smooth for my liking) and as it warmed some roasty undertones and a bit of cloying sweetness came out in the middle. But overall it was just an okay-drinking, albeit easy at 5% ABV, beer. With more time, I might have tried the Pale Ale next, but the only thing that could get me to go back again and sample it was the ambiance.

The food here is typical upscale pub food. From chicken, to fish, to salads and appetizers, to plenty of interesting burgers and sandwiches, they've got the food menu gamut covered. 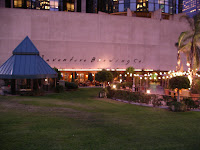 The ambiance is the true winner here. Yes, it is set inside the equivalent of a shopping mall and hotel, which is OK I suppose. Convenient, for sure, for hotel guests. The interior of the brewpub is a comfortable space with tables and chairs, wood trim and colors that make it easy to linger for a while. The bar area has a certain sports-related theme, complete with televisions.

But, head out through the doors to the patio and you'll find a whole new world. Brewing equipment is contained inside a sort of pool house looking structure (for lack of a better analogy, but you be the judge). Tables are set up amongst flower planters to give an extremely relaxing environment for dinner and brews. All of this is perched (at least) four stories about the hustle and bustle of the L.A. street scene. And, in appropriate weather, the swimming pool is only steps away. I'm sure more than a few hotel guests have enjoyed some craft brew and a dip in the pool.

It's funny. On the flight home, I debated not writing anything about BBC. I figured I wouldn't have much to say except for the outdoor patio area. Turns out I was right, except I had plenty to say about getting there.
Written by Bryan Kolesar at Thursday, February 08, 2007