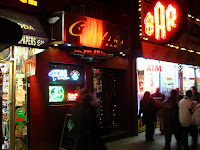 The Collins Bar was my last stop on the way out of NYC on 12/27. After a day of New York pizza, beer, walking, beer, New York hot dogs, walking, and more beer I was sure wishing that I didn't have a train ride and an 80-mile drive ahead of me. Go here for a complete summary of the days events. 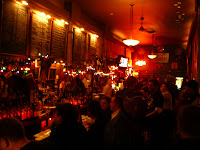 But, soldier on I did to The Collins Bar, on the border of Hell's Kitchen and Times Square in Manhattan. Boy, have times changed from when even Times Square was a bit dicey and Hell's Kitchen was just that...Hell. After leaving Hop Devil and making a quick pit stop at Papaya King, I made the walk off the subway over to The Collins Bar. Quite a congested area this neighborhood has become. And, the scene did not become any quieter inside.

At first, I thought that the hubbub all had to do with the special Sprecher event that the bar was hosting on this particular evening. But, judging from the beer and other drinks floating around the bar, the event didn't register with many of the patrons. No worries, though, from me at least. It just would've been nice to have a bar stool at the ready for me when I walked in and a little less noise. Or, perhaps I was just feeling old and grumpy by this time of the day and given the impending long trip home that I mentioned above. 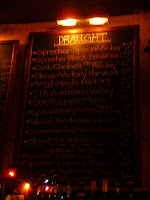 On a more cheerful note, the hosts sure have made the best of a bad situation at The Collins Bar, given that their other location (Blind Tiger Ale House) has been temporarily shuttered due to unfathomable bureaucracy. The tap and bottle list is top-notch here and the service is downright hospitable. Unfortunately, my attempt at a flashless picture of the tap list will require the keenest of eyesight to prove that comment true.

So, what did I think of The Collins Bar? Unfortunately, this may not come out sounding great and perhaps I shouldn't say anything given my state 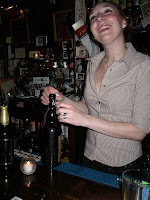 of mind at the time. It was narrow and cramped, loud, and crowded. But, the beer was great! Tara (I hope that was her name) helped make my visit more tolerable. As did the group of guys that I rejoined here that I met earlier at Essex Ale House. We split a 1 liter bottle of Sprecher Scotch Ale five ways. At $30 and 10% ABV, it was advisable both financially and health-wise ;=) Sprecher appears to brew some fairly solid, but average everyday beers. Where they really seem to shine is with their Russian Imperial Stout, Scotch Ale, and Doppelbock that they brought along for this event. If they're available in your state, or you're ever in Wisconsin, make sure to try at least one of them.

From the Gnomette at Essex Ale House earlier in the day to Sprecher here at The Collins Bar to wrap up the day, this was exactly why I took the day off from work to do a day trip to NYC. To find beer otherwise hard to locate at home in the Philadelphia area. And, to check out a couple of new beer joints. Winner on all fronts! Though, I'll need to pay another visit to The Collins Bar just to give it a fair shake.
Written by Bryan Kolesar at Tuesday, February 06, 2007