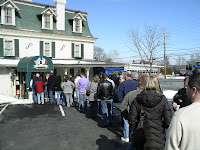 Kudos to Chris, Russ, & the Rest of the Gang at the General Lafayette in Lafayette Hill, PA for pulling off a successful first attempt at a major regional beer festival. This was subtitled Strong Beer & Great Food. I had my skepticism that a place laid out in the way that G.L. is could host an event with 15+ breweries and plenty of food to go around. Small rooms connected by small passageways make for an intimate restaurant, inn, and brewpub, but a festival? 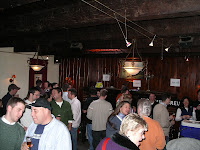 Absolutely yes, appears to be the answer. Ticket sales were capped at a smart level which allowed for no restroom lines, virtually no waiting for beer or food, and the ability to move freely from one room to another. Even the parking was adequate for all of the festival-goers.

So, what scored big points? Here's a quick recap of some fun observation, followed by a listing of who brought which brews. 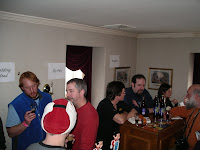 Man in costume: Woody Chandler in a button down corporate shirt and shaved face. Ok, the first is true and the second...nah.

Brewers, Writers, and other Cognoscenti: I lost count. 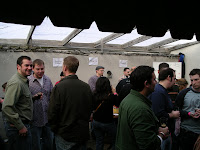 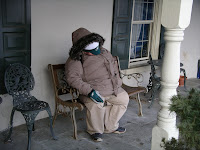 p.s. A good time had by all??? No doubt! Can't wait for the next event at the General!
Written by Bryan Kolesar at Sunday, February 18, 2007

I'll be out Camp Hill/Harrisburg way this spring.

Hopefully the App' still has on the Broad Street...