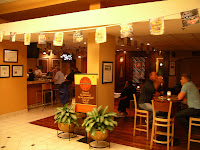 After my successful business trip to Los Angeles (but, unsuccessful beer hunting trip...save for a BevMo purchase in Pasadena), I needed to reward myself with a trip to T.H. Brewster's at the Sheraton Four Points hotel, located adjacent to the LAX airport. Plus, with the looming redeye flight back to the East Coast, I figured it might provide a good sleep aid.

Here's a tip for anyone searching out the Four Points hotel. First, go to the airport and return your rental car, check your baggage, and get your boarding pass. Then, step outside and catch the free shuttle bus between the airport and the Sheraton properties. In less than 5 minutes, you should be deposited at the front door of the Four Points hotel. It's in a cluster of hotels and business located around the airport. 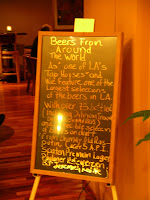 If you've done all this in sequence, then when you're finished at Brewster's, you'll easily catch the shuttle back to airport where you can proceed directly to the security points. I did this all in the span of two hours. But, I really think that if you had as little as 60-90 minutes of extra time (and the desire) that you could have yourself at least a decent beer or two without feeling rushed.

Once inside, the bar is just down the hall from the main entrance and across from a "loungy" area where live music often occurs. Well, I can't say much about the ambiance of the bar...there isn't much. But the quality draft and bottle list, that's a different story all together! I've only listed the notable ones below. While they don't have many draft beers, the ones on tap on 1/31 were certainly nothing to turn away. 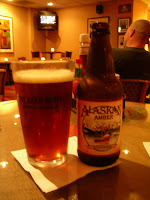 So, what did I partake in? After a bottle of Alaskan Amber, I turned to Bear Republic's Racer 5 and North Coast's Old Rasputin Russian Imperial Stout, both on tap. Who can't get sleep on an airplane after that? Turns out...it would be I that cannot! 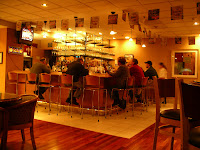 Let's see, about the bar I can tell you that service is pleasant but not overly beer knowledgeable, but that was OK for me. The draft lines seemed clean and the beers were poured and presented properly. Hard to complain in that regard. There were several TVs showing various sporting events, hard to complain in that regard. I can probably only complain in the sense that the atmosphere was sort of cold feeling. The chairs, the tables, the bar area, the overall size and squarishness of the place just leave me kind of blah. I know, I know...just enjoy my glass of Racer 5 and don't dwell on the environment. Ok, that kind of helps. But, if you're judging the environment, this places gets a low mark. I know, I know...it's a hotel and it's at the airport, but I'm demanding ;-) Point is, the beer here is the real winner. Check it out below and see if you agree.

p.s. the only one other wish that I have (go figure!) is that this would be located inside the terminal security at the airport, or at least connected to the airport. Just a tad more convenient in that case.