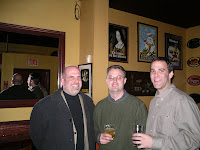 Welcome to "tion" night at Monk's Cafe in Philadelphia, PA. That's the introduction we were greeted with. A dinner by any other name would not be appropriate for the annual west coast guests from Russian River. Husband-and-wife team Vinnie and Natalie Cilurzo came east for a few days and made stops at Tria and Monk's for two first-rate events.

We only have The Brew Lounge interns to blame for the tardiness of this writeup. Seems they want some sort of a pay raise. Actually, they just want to be paid in some way. Uh, we'll have to work on that one.

In the meantime, let's talk about these two little beer institutions...Monk's Cafe in Philadelphia, PA and Russian River Brewing from Santa Rosa, CA. They got together for the first beer dinner of the year at Monk's on 1/23/07. If you recall our reaction from last year (Bryan's , Adam's) when both Russian River and Pizza Port showed up at Monk's for a combined dinner, this one was in some ways tamer. If only for the fact that there were half as many beers on the menu! But, what we got was an equally impressive evening where Vinnie showed off some of his finer beers. Some even that aren't available in the market any longer (Adam will have more detailed notes on this aspect later).

We arrived promptly at the 7pm start time, due to my work schedule and indecision about going (the tail end of a stomach virus, that's all you need to know!). The restaurant was predictably abuzz with anticipation for what the night held in store. The menu, listed below, surely had people ready to get started. As usual, George Hummel began by introducing Vinnie and the evening events to come. He also made mention of last year's over-the-top, sensory overload dinner.

George then yielded the microphone to Vinnie who went through the process of describing each beer's creation and fermenting history. Vinnie sprinkled in some interesting anecdotes about the availability (or lack thereof) of the beers and his personal favorites. Again, Adam took more copious notes here and will comment in more detail in a follow-up review of his own. It was evident that Vinnie probably had as much enthusiastic anticipation for this dinner as we all did.

Following are some of my quick notes, bullet style, of impressions of each course.

~Russian River Damnation
~Amuse (seafood mousse on grilled meyer lemon)
A tasty start of tiny seafood bites. Damnation is a nice easy-drinking beer with a slight bitter note in the end. This style is one of my top 3 favorites, so it's no surprise to hear me say this. The GABF judges agree, too! Great start to the evening!
~Russian River Temptation
~Spicy Thai Shrimp w/grilled watermelon
Nice, even building "heat" in the shrimp. Watermelon didn't move me, though. This barrel-aged award-winning beauty, complete with a touch of wheat-like delicateness paired with the Bret funk in the Temptation, went nicely with the spiciness.
~Russian River Sanctification
~Grilled Scallops w/grilled cantaloupe
Fish eggs on the plate created the winning combination for me on this night. Perhaps it was the brininess that really helped to bring out and highlight the dank, barnyard, horsehair character of the Sanctification so much more so than when drank without the food. Simply awesome!
~Russian River Supplication
~Apple Glazed Duck Breast w/maple glazed, baked lady apple
Duck was rare, tender, and so flavorful. A nice pairing with the Belgian-like Supplication strong ale.
~Russian River Blind Pig
~Mini Pork Tenderloin Sandwich w/grilled pineapple
Such a nice break from the other courses. The IPA (a very, very delicious IPA in every sense) and the sandwich just went together seamlessly. And, neither required much thought-probing analysis...that can actually be a good thing, no? Enhancing the experience was the bleu cheese and the pineapple in the sandwich.
~Russian River Salvation
~Bananas Foster Bread Pudding
For as practically perfect of a beer that Salvation is, I think the winner here was the bread pudding. It was a decent enough pairing, but the decadence of the food here seemed to overshadow the some of the dry roastiness of the beer. Some bitter and sweet undertones in the beer helped, but not seemingly enough for me. 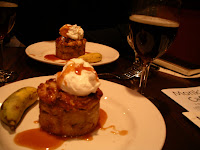 Fortunately, we were "able" to miss our 10:15pm train, so we hung out at the bar with Vinnie and others for another 45 minutes waiting for the next train. Stories of beer making and beer travels were told. All around, another solid winner in the history of beer dinners at Monk's. It was a good enough time that we are able to almost forget that we didn't make it to Tomme Arthur's dinner two weeks later. So, up next is Brooklyn Brewery and Garret Oliver in March....life is beery, beery good!