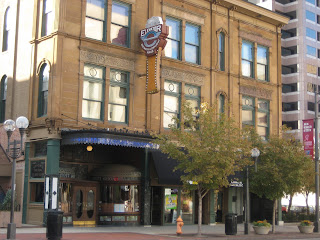 A little over a month ago, I found myself in Columbus, Ohio for the Penn State/Ohio State college football game. Football-wise, this was a very good thing. Beer-wise, uh, it was so-so...more so, from my agenda being more on football then craft beer hunting. We guys stayed in a downtown hotel within spitting distance of The Ohio Statehouse. In our hotel, there was one local craft beer on tap, a perfectly solid pale ale from Columbus Brewing. As for good beer within walking distance of the hotel, there really wasn't much to speak of other than Elevator Brewing Company. That worked out just fine for us on Friday night. After what should have been an hour long flight, half hour from home to airport, twenty minutes from airport to hotel, and one hour waiting time in the Philly airport...let's see, that makes like three hours home to hotel...like I said, should have been. Now recall, this was Friday around rush hour at the Philly airport...ergo, all bets were off...oh, and there was a storm front moving through the region. 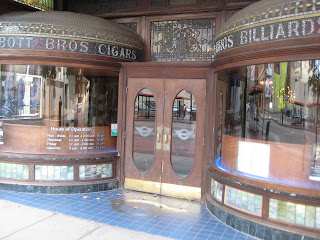 So, more like five hours after leaving home and checking into the hotel, we beelined a few blocks to Elevator. Elevator's pub is located in a beautifully restored building (the brewery is across the street) with an interior full of stained glass, wood, unique fixtures, and interesting angles. Two billiards tables in the back of the pub both date over 100 years old. I'd seen these guys at GABF just a couple of weeks prior and was anxious to try their fuller lineup. And, try I did. Elevator typically pours around 12 beers at any given time, spanning the spectrum from light lager to IPA to doppelbock and rotating specialities. The beers provided the soothing elixir and the solid pub grub fed the appetite. We got into a bunch of wings, burgers, and the like. As for the beers, I sampled a half dozen of them and found them all to be decent enough to pass the evening with. Particularly memorable were the Bear Ass Pale Ale, the Three Frogs IPA, the Procrastinator Doppelbock, and especially the Coal Porter. Two of the other guys found the Buckeye Red Ale agreeable enough to put back a couple glasses worth, while our fourth abstained and went with the vodka. I thought I'd return for another glass or two of malted barley beverage and a few interior pictures. But, they were closed on Saturday afternoon, not reopening until 5pm...The downside, I suppose, of being located in a rolled-up downtown business district. I'd also been led to believe that the historic building's history and the brewpub story would be on their website and I could refer to it later when sharing my notes with you. Alas, not to be. To find other beer-worthy joints in Columbus, you would need to venture a little farther into the Arena District for Gordon Biersch and Barley's or even farther north towards the University in the Short North neighborhood (Surly Girl Saloon). Up around campus, Mad Mex stirs up the tex-mex and full lineup of interesting beers while on the other side of the beltway BJs provides relief for the "I recognize this from back home" set and an Ohio staple, Winking Lizard, pours the good stuff. I'd gone looking for the Brewery District, only to find that this was a remnant of Columbus' past, I suppose in part the same way that Brewerytown in Philly is no longer anything like it used to be. Next time you're stuck downtown in Columbus, fear not, you have Elevator to wander over to for some fresh beer, pool, and darts. I'll get back there for a fuller review the next time I'm in town. Oh, and the restrooms, of course. A touch of brewing, even above the urinals, with posters of beer style and yeast guides. 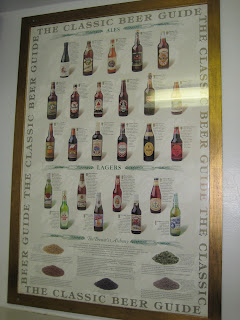 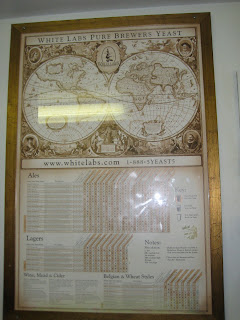 Nice review, you certainly stumbled upon one of the true hidden gems of Columbus. Elevator is one of the regular haunts for us here at LifeEpicurean. If for any reason you're going to be in the city this upcoming Friday, we'll actually be hosting a beer tasting at Kafe Kerouac featuring some great seasonal selections brewed by Elevator.

The one thing that I failed to really detail at all was the service. It's interesting to hear comments at Columbus Underground, mostly recorded a year and a half ago in 2007, about the perceived service shortcomings.

During our 2 hour visit, the door and waitstaff could not have been more accommodating. Not in an annoying way, but in a friendly and patient way. A team approach to handling food and drink delivery appears to be effectively deployed. Perhaps customer service-related issues were addressed in the last year or two.

Thanks for the note about the beer tasting. I'll keep you in mind for my next visit to Columbus.