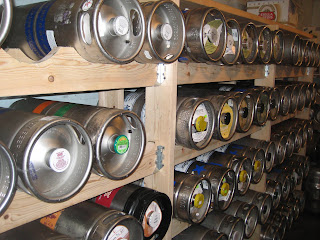 There's a room in northern Chester County across the street from the Exton Square Mall where people travel sometimes great distances to step foot in. It's a refrigerated room and people aren't just heading there in the summertime to stay cool. It's the cold box at Exton Beverage on business route 30. Greg Ramirez, owner of Exton Beverage as of October 2007 (manager since October 1996), has been steadily increasing the amount of sixtel inventory over the past few years. So much so that this summer he built racks for an extra wall of storage within the room. The holiday season seems the right time of year to pickup a sixtel or two of beer for all of your dinner and party guests. 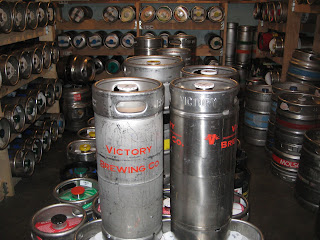 Quick tutorial to bring you up to speed. A beer barrel (or bbl, abbreviated) is 31-ish gallons of beer. Therefore, a half-barrel (or half keg) is 15.5 gallons and the standard size when the "average" person asks for a keg of beer. A quarter-keg is half of that or around 7.75 gallons. We could talk about other sized vessels like pins and firkins but let's save that for another day. A sixtel then, still using the 31 gallons as the starting point, is just a shade over 5 gallons of beer (or around 40 U.S. pint glasses, more depending upon head size)---also the typical size of most homebrewing batches of beer. 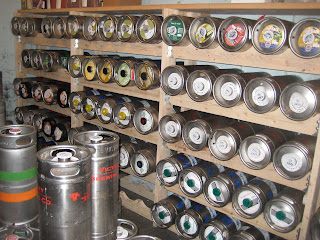 There's not much to wax on eloquently about when it comes to the sixtel cold storage at Exton Beverage. I mean, it's a refrigerated room with beer. Even I can't get all that wordy about it. So, instead, we'll approach it from an interview style angle. Suffice to say, it borders on a wow moment when you open the door. Let's allow Greg to share the rest of the story with you. 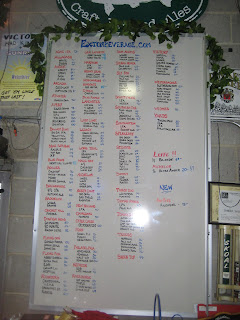 The Brew Lounge ~ Was there a particular point in time or event when you said, "I've got to start focusing on these sixtels?" Greg Ramirez ~ I would say my Eureka moment came when Victory started making 1/6 kegs available to us several years ago. I am not sure of the time frame but I’m thinking it had to be at least 8 years ago if not more. When Victory Brewing started 1/6 kegs they actually had the shorter and wider looking 1/6’s back then. I remember that they had made an initial investment in these particular style 1/6 kegs. These kegs are still around but eventually Victory went to the taller 1/6 kegs. The first time I saw these kegs I immediately thought that these were the perfect size kegs that folks with home draught systems. My thinking was that size and quantity of the 1/6 keg made buying craft beer affordable and convenient for consumers. Personally I’ve had 1/4’s and 1/2’s of better beer on tap and it seems to take forever to get through all that beer. With a 1/6 keg, which is about 55-12oz servings, it doesn’t take as long to kick and this in turn keeps the beer’s freshness. TBL ~ Could you say which is the most popular brewery or specific beer in terms of sixtel sales at your place? GR ~ I would say for Exton Beverage, the most popular brewery in terms of 1/6 kegs would be the local breweries. Victory would take top honors as far as number of kegs. Victory HopDevil, Prima Pils, and Lager are the best sellers for Victory. We also sell quite a bit of Sly Fox beers in 1/6 kegs as well. Stoudt’s, Yards, Flying Fish, Tröegs, and Sierra Nevada all do well. TBL ~ Why do you think people are drawn to sixtels? GR ~ As I mentioned, 1/6 kegs hold about 55-12oz serving or 2 and 1/3 cases of beer. This amount of beer certainly makes it affordable. Typically 1/6 kegs average about $60-$70. When comparing prices of cases versus 1/6 kegs there is definitely saving in volume. Another draw for 1/6 kegs would be the actual size of the keg itself. Since these kegs are tall and narrow they allow one to actually store more than one 1/6 keg in their draught unit. TBL ~ How much additional equipment does one need to tap and serve from a sixtel? Do you sell or rent this equipment? GR ~ Just about all 1/6 kegs use the same tapping system. This would be the standard ‘D’ Sankey coupler which is used on most domestic 1/4’s and 1/2’s. Exton Beverage has all the equipment to dispense beer from all kegs. Picnic pumps are available for use with 1/6 kegs. There is a $50 deposit for the tap itself. Exton Beverage does not charge a rental fee for taps, deposit money is refunded upon return (given a reasonable amount of time). We also offer draught services which include refurbishment and conversions. This includes adding addition draught lines to an existing system. Depending of the space a beermeister or kegerator, one could add as many as three spigots. Imagine the envy of friends when they see three great beers on tap. TBL ~ What is the most commonly requested beer in a sixtel that you can't get? GR ~ The most commonly beer asked for that is not available is probably Yuengling. We also get people asking for Miller Lite, Heineken, and Corona. I find the Corona request funny myself. Corona is not available on draught anywhere but I’ve had people tell me that they have most certainly had Corona on tap! Most of the beer found in 1/6 kegs is craft/micro breweries. There are a few European beers available as well, like Pilsner Urquell and Chimay. TBL ~ If you only got access to a single unit of a particular sixtel that you would keep for yourself and not put out on the floor for sale, which would it be? GR ~ The one beer I would keep for myself? Tough question! As a Hophead I would say Russian River Blind Pig. Pliny the Elder or Younger would be nice too but a bit too strong for me to have on tap, after all I do like to get up early. These past couple of years I was actually able to secure a 1/6 keg of each Sly Fox Anniversary IPA that was released every month. I actually kept these for myself. These beers were single hop IPAs and enabled me to really learn about different hop characteristics. TBL ~ What else should we know about sixtels and how you sell them? GR ~ Over the last several years, Exton Beverage has seen a steady increase in 1/6 keg sales. The larger the selection has brought more sales. This past summer we actually had to expand our cooler space for several reasons. The first was logistics. We had so many kegs stuffed in our keg room that it was virtually impossible to get anything in or out. Kegs were buried and became a bit unmanageable. We purchased a use walking cooler for all our ¼ and ½ which allowed us to dedicate the existing cooler to 1/6 kegs. We finished our last 1/6 keg rack to complete the cooler. On July 1st we were ready for the big 4th of July holiday weekend. We believe we have the largest inventory of 1/6 kegs for retail sales in the Philadelphia area. I have believed that to be successful we need to be a beer destination, not just another beer store. Our website had been a valuable tool in drawing customers to our store from far and wide. We keep a list of 1/6 kegs in stock and update it regularly. 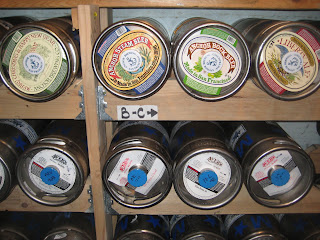 Great post! :-) Greg has an amazing lineup of sixtels.

He even has draft system supplies. I've bought beer line from him and a tap. Its the place I go to exchange my CO2 tanks as well.

Thanks....good guys and beers. Don't you just get tired of saying those two things together?

Wow, Bryan! That's a great write up! Many thanks for featuring Exton Bev on the Brew Lounge!! Your friend in beer, Greg

The words are mostly yours, Greg, so I'd say well done to you sir! And thanks for keeping the taps flowing.