And what to my wondering eyes but a beer?

Here's a two-fer to get the month of December rolling here at The Brew Lounge. Philadelphia Brewing and Earth Bread + Brewery. 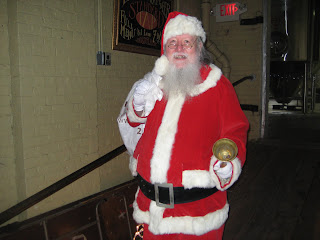 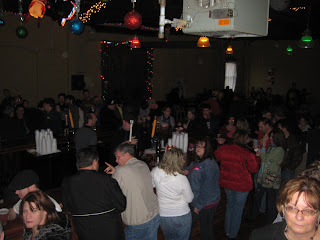 Look what the cat dragged in... Generally speaking, it was a crappy day....weather-wise, that is. Which may help to explain our 32 minute trip from Malvern to the Kensington home of Philadelphia Brewing Company. They hosted their annual Open House yesterday and, as usual, did not disappoint. The crowd was a bit thinner, likely due to the miserable weather, than in prior years. But, that didn't stop a couple hundred people from enjoying the usual lineup of Rowhouse Red, Kenzinger, Walt Wit, and Newbold. Also available and new to the scene was their latest entry in the Select Beer Series, a fresh-hopped black lager called (Pedro) Feliz Navidad Black Lager. (Light finger food was also available...and much appreciated.) 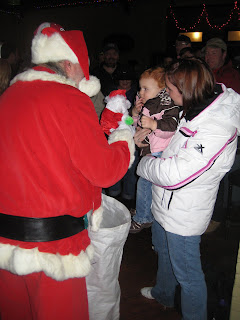 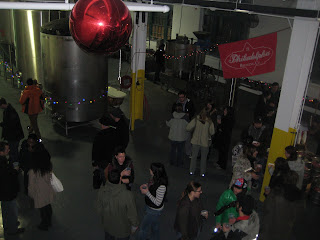 Scoats has a few vessels of it over at his Grey Lodge Pub in Mayfair. In fact, he's tapped the first of them and you can get some of the fresh stuff tonight as Beer Season opens at the Grey Lodge. Be sure to get some while you can (I did yesterday...in fact, a few of them!); I doubt you'll be disappointed. Now, if I could just stumble across some of that wheat wine, hmmmm. 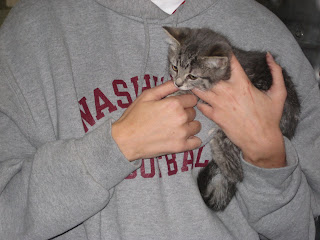 Back to the Open House. Santa was there, of course. More kids than I can recall at past Open Houses, which meant that Santa had his work cut out for him. Future Pink Boots Society members were there, very nice indeed. The Flat Iron Wildcats organization was taking contributions of food, litter, and cash to support the neighborhood kitty claws (er, cause). And, of course, the PBC crew was scattered around the brewery at beer kiosks and behind their impressive new bar (finished just the day before) in the upstairs tasting room. Very nice, indeed...and more comfy than ever. It made us quickly forget about the weather outside. 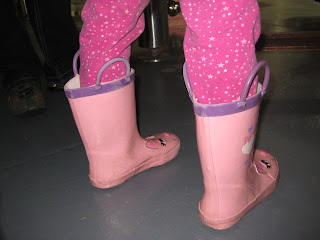 On to Earth Bread + Brewery But, outside we needed to go. Our plan was to take the Germantown Avenue "tour" from Kensington to Mount Airy, finally for our first visit to Tom's (Baker) & Peggy's (Zwerver) Earth Bread + Brewery. If you recall (I unfortunately do), I was in Denver for the GABF as scores made their way to the grand opening almost two months ago. With things up and running now for several weeks, it seemed like an obvious place to stop for an early dinner on the way home. After all, Mount Airy is practically along a straight line home so.... (okay, maybe like a boomerang shot?) 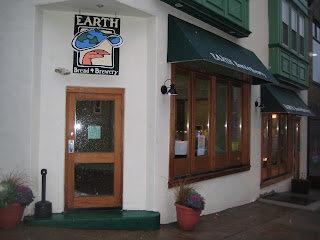 On a rainy Sunday, it was easy to grab an on-street parking spot just across the street from EB+B. We were there a half an hour before their 4:30pm Sunday opening time, so we beat a quick path to McMenamin's for some Russian River Damnation on draft. With these two A+ neighborhood joints are around 47 steps apart (unofficial count), and North by Northwest just across the street (more for their live music than beer, but that's okay too in a pinch), there's a nice little triangulation thing going on in Mt. Airy these days. 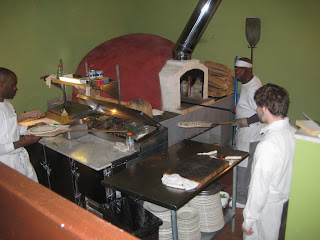 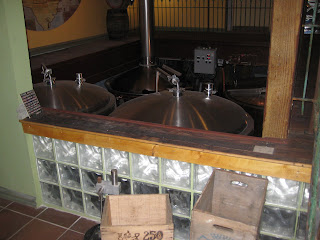 Coming in off the corner entrance to EB+B, we were greeted by the staff who was fresh off their shift meeting. The bar has a dozen or so seats. Also on this main floor are the wood-fired oven, a handful of tables, and a top-down view on the brewery operations. Hand craftmanship is evident throughout EB+B, from the flatbreads and the beer, to the equipment in the kitchen to the restrooms, and the artwork on display for sale by local artists. 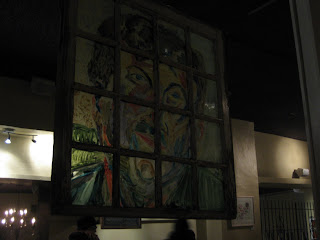 Above on the second floor, an even more spacious dining room provides a different, quieter vibe perfect for family dining. There's also a smaller bar upstairs as well. In a way, the vibe changes as you go up the stairs in a similar way that it changes when you go upstairs at Grey Lodge Pub. 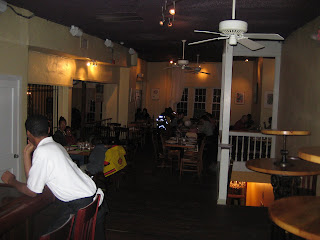 Tom always has a handful of his beers on tap and also keeps at least as many guest beers as well. When we visited, his Bradley Effect, Lil Pylon, Terra Fume, and Here's Brucker were on tap. To give the beers a style name may be a disservice to Baker, who generally eschews strict style guidelines. Suffice to say that the closely-related styles were, respectively, a Gruit, a Dubbel, a Smoked Wheat, and an Alt. The Gruit sample was good, but I was glad to only have asked for a sample, since my palate wasn't in the mood for a full glass of the herbal flavors that this beer delivered. The big winner for me was the Terra Fume. Paired with the Mushroom flatbread, its slightly smoky essence complemented the earthy flavors of the mushrooms nicely. Other beers from the guest world came from as nearby as Sly Fox, PBC, Troegs, and Victory and as far away as Youngs, Bear Republic, Founders, and Rogue. As you can see, Tom's approach is (basically) to make the beers that he wants to make. Many of them will tend toward the session-y side of things (i.e. focus on flavors, not alcohol), while he'll bring others to do what they do with big flavors and ABVs in beers with hops (Racer 5), chocolate malt (Double Chocolate Stout), and peaty malts and ABV (Dirty Bastard). And, everyone wins... 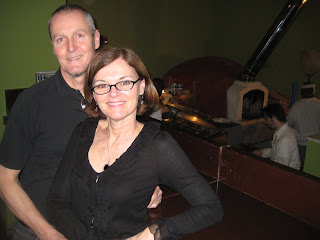 EB+B is definitely the comfy neighborhood kind of place that we here in Philadelphia boast makes our beer community so special. With thoughtfully sourced food and drink in comfortable surroundings, this is the kind of spot that brings in people from all walks of life. As we wrapped our visit, we noticed a stream of young couples, families with children, and middle aged folks beginning to fill the dining rooms. Further, I see this as the kind of place that will weather the next couple of financially-difficult years as it provides reasonably-priced high quality food and drink to its customers.
Written by Bryan Kolesar at Monday, December 01, 2008

I don't understand. I was in Denver for GABF, I SAW you there (and you saw me, it was hard to miss when we were in the same cab), and yet, somehow, I managed to get to EB+B twice that opening week.

Byran nice write-up on EB+B. You captured the real essense or vibe of Tom and Peggy's place. During my visits, it is pretty clear that the community, especially families, have embraced their establishment.

P.S. Byran, I think it is time to either invest in a new camera or learn to use the flash attachment.

Thanks Richard. I was glad to finally get there. We spent about 90 minutes or so on this visit; would definitely like to go for longer session(s) in the future. Sucks that a friend of mine doesn't live down the road anymore, like he did for about 6 years.

Regarding the camera. It's a fairly new one. For the distance shots, the flash wouldn't make any difference; it just won't throw that far. With the closeups, I do need to experiment more with flash settings and timed exposures. I turn the flash off in some cases because I'm just not happy with how unnatural the flash light appears in the pictures. (Or you need new glasses ;-)

Let's meetup next time at EB+B.