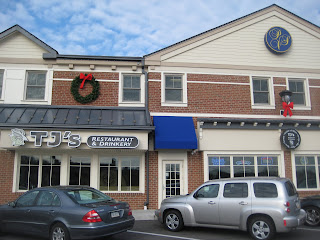 If you live in the Philadelphia region and have not been to TJ's in Paoli, PA, I call beer foul on you. Celebrating their 5th year anniversary this weekend, TJ's (that would be the eponymous drinkery of Terri & Jeff Miller's, respectively) has grown into a "beer destination" in the Delaware Valley; an argument could even be made for not just the local area, but the Northeast or Mid-Atlantic as well.

High praise? Certainly. Too high of praise? I, and many of TJs' regulars, would say certainly not.

Believe it or not, it's been over five years since Goose Creek Grill left the space that TJ's now occupies. I'd never been to Goose Creek and recall thinking curiously about what this new place, TJ's Everyday (as it was called at the time), was all about. Actually, it took me at least a couple of years to finally get there. And, when I did, the craft beer was just beginning to show up at the bar. Jeff started slowly with introducing "different" beers to the clientele, then finally went all in. Jeff says that as if his restless nights of sleep aren't trouble enough, new business ideas constantly run through his head...to the point that he keeps a notepad on his nightstand...some ideas work and some don't. I'd say this one with the craft beer thingy has worked pretty well. 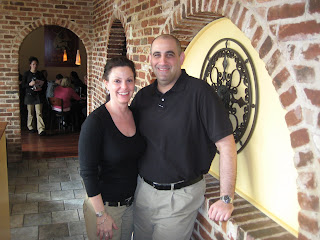 It took a little while for the word to get out that this place across the street from the Paoli train station was actually serving up decent beer. The legacy there certainly didn't support the better beer scene. Admittedly, it even took me a while to finally call TJ's my local. It must be my local now considering that I never feel like I'm "on the job" when I'm there. Further proof in that I've never written a full profile like this before about TJ's and when I did finally get around to it this week, I realized I didn't have any photos of the place on file.

When I first moved to Chester County over seven years ago, the Flying Pig in Malvern quickly became my local beer joint. But, TJ's finally won me over with a thoughtfully developed food menu that incorporates beer at every turn in a friendly environment where you could almost say that every one knows your name. More on that later.

The layout is equally inviting. With a sometimes raucous bar crowd (particularly during sporting events), the dining rooms are set off on the other side of the building behind tasteful decorated brick walls. It's certainly possible to have a quiet family dinner in the dining room while the big game is on TV in the bar area and not even know it. Well, maybe not the World Series, but I think you get the point.

Prior to opening TJ's, Jeff owned a deli and catering company, Duffy's, in King of Prussia since 1989 that is still run by his brother. On a busy night, you can hear Jeff in the kitchen presiding over the dishes that are being prepared off the menu that he developed to highlight both the food and the beer. Instead of me trying to describe the menu any farther, just go check it out for yourself.

For the record, my favorites and oft-ordered dishes range from the Stout & Onion Soup, Arrogant Chipotle Chili, Boneless Chicken Wings, and Crispy Boneless Wings on the small plate list...to the Cajun Alfredo Cavatappi Pasta (great for marathon "carbing", speaking from experience)...to the Dunkel Pulled Pork (someone get me a North Coast Thelonious!), the Chicken Boursin sandwich, Hop Hog Chicken Panini, any of the "Belgian Blonde" burgers, or the Anchor Steam Crabcake all on the sandwich menu. Not so peculiarly, I've never had dessert at TJs; maybe it's because I'm always saving room for that "one last beer." But, when I do, it will have to be the one that screams after me the most...the Apple Pie à la mode.

But, this is what I'm talking about. A restaurant that serves good food and good (often great) beer and, most importantly, emphasizes them together. Some can keep a great beer list; some can have a great beer dinner once in a while; some simply throw it out there and hope that it sticks without much staff training.

Some restaurants have started listing a recommended beer for a dish or two on their menu. Their servers may even be able to recommend a Belgian beer that goes with mussels, or some other standard staple or pairing. But, at TJ's, every food menu item has a recommended beer pairing, many include beer as ingredient in some stage of the preparation, and every server in the dining room has at least what would pass as better than average (compared to many dining rooms) knowledge of the beer. If nothing else, they talk about the special beers as if they are commonplace and take pride in them; it's not like a "oh, yeah, management is trying out these new beers, uh, er, whatever" thing. If they don't know the answer to a question, they'll go without hesitation and ask someone who does know.

At the bar, the service gets even better. Though they pour every beverage possible, they proudly show off the craft beer and will pour a sample for your approval while discussing their knowledge of it with you. Over the past year, Jeff has made it a point for you to know what to expect on the beer tap lines before you leave home. Their website has the most real time tap list I've ever seen. Other establishments have tap lists that are accurate to within a day, or maybe even the hour. But, at TJ's the online tap list is updated as soon as the keg is flowing; it's simply part of the process of changing kegs. As a matter of fact, why don't you go now and check out what's on tap. In the spirit of promoting their weekend anniversary event, you'll be able to see the stellar drafts that will be enjoyed this weekend. Stellar may even be an understatement.

And, don't overlook the bottles. For sale to drink both at the bar and at home, the bottle coolers are always well-stocked with great beers of both the commonplace and hard-to-find variety. 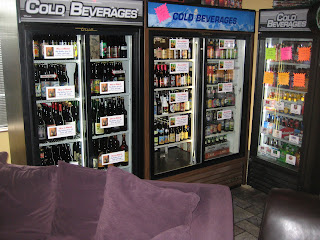 So you get to the bar and let's say that you're a first timer there. Allow me to repeat a piece of my first visit there and tell me if yours isn't the same. Something like this....Bartender: "Hi there, what can I get for you?" Me: "such-or-such a beer" Bartender: "There you go; by the way what's your name? Mine's Scott." This is important to note because this is the way things go at TJ's. The emphasis is so great on customer service that not only will you get your food and drink politely and professionally served to you, apologized to if something is wrong (like an overflowing glass of beer), or asked what you'd like to see on TV. But, you'll be asked your name and get this...they'll tend to remember it if you return in the near future. Talk about disarming. At my second visit, I get a "hey, how ya doin', it's Bryan, right?"

The great thing about TJ's is (have I mentioned that there's more than one great thing?) that this isn't some kind of a special treatment thing going on at the pub. There are some bars that you might go in to where you're stretching to get some service as the staff kowtows to their favorite customers at the other end of the bar. At TJ's, you won't get treated any more special than the next person. And, I say that in the most complimentary way, if you catch my drift.

Maybe here is a good place to take a pause to recognize that in an industry that sees high turnover as a way of life, it seems like a testament to the way that Terri and Jeff manage the place that six staff members have been with them since the beginning. In the front of the house, Scott Blaine, Laurie Dimidio, Amy Flather, Staci Klostas and in the back of the house, Joe Alway and Jon Reynders have all been helping deliver the TJ's message of quality since day one.

Speaking of Jeff being involved with employees and customers...the BeerAdvocate discussion forums. Jeff just doesn't lurk there trying to either pimp his business or squash others that may have a negative thing to say about his business. He's there (here's a link to his profile) looking for trends, buzz beers, and to join in conversations about whatever's happening in beer, whether his bar's name is involved or not.

Okay, the last great thing, I promise, about TJ's is (well, maybe this is a bit selfish) that they are all of 3.1 miles from my house. Hey, that's a 5k and that reminds me that TJ's is also a great place to park the car, go for a run through pastoral northern Chester County, and to return to for beer and grub. Um, yeah, I've done that.

Let's see, what else. Bingo, quizzo, poker, and other nightly specials help draw in an ever-diverse crowd. Oh, and somewhere along the way here I mentioned that they are across the street from the R5 SEPTA train line's Paoli station. City tipplers, take note. Only one stop and $6.50 from 30th Street Station to Paoli in something like 25 minutes on Amtrak...or 45 minutes, $4.75, and 16 stops on the R5. If you choose to take the R5, make a train crawl out of it and stop at Teresa's along the way (the Wayne stop) and Flying Pig (the Malvern stop). 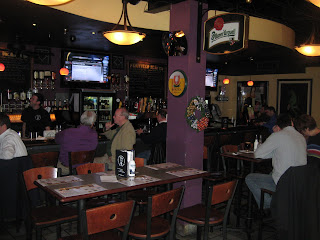 What do you want at the end of all this, a comparison? To what? Is it Monk's, Bridgid's, Eulogy, or Teresa's Next Door? No, but they do serve some of the very finest beer from the other side of the pond. Are they Standard Tap, Memphis Taproom, or a local brewpub? No, but they do serve some of the best local beer available. Are they Ortino's Northside? No, but they do have a great menu. How about Union Jack's? Hm, they don't have a wonderful outdoor seating area. You got me. Finally, one shortcoming of TJ's: no outdoor seating. But, you know what? I think we'll be just fine. Point is, don't go into TJ's trying to compare them to anyone else. They are setting their own standard, and others can hope to measure up.

If you stop in this weekend, or whenever you stop in next, be sure to thank them for what they've been doing and encourage them to continue doing more of the same. Seeing you eat and drink well, and celebrate anniversary milestones with them is one of the most gratifying parts of their livelihood. And if you tell them that The Brew Lounge sent you...well, you might not get a free beer, but you'll at least be greeted by name with an honest smile, a thanks, and a handshake.

Happy Anniversary to Jeff, Terri, and the entire TJ's crew that makes the restaurant and bar one of the best around!

Email ThisBlogThis!Share to TwitterShare to FacebookShare to Pinterest
Categories: TJ's

THEY HAVE A GREAT SELECTION OF BEER,BUT FLYING PIG IN MALVERN IS ONE OF THE TOP WITH A GREAT VARIETY OF BEERS AS WELL