Skies threatened, but the crowd wouldn't have noticed even if it had rained. The temperature was a bit on the warm side, but the crowd knew how to deal with hydration as well. Iron Hill-Media hosted the 9th annual Brandywine Valley Craft Brewers Festival this past Saturday. It's the one of the very few annual festivals in the Philadelphia region that I know of that routinely attracts most of the region's breweries. And, it appears that participating breweries sense that not only are beer drinkers in the Philadelphia region among the savviest around, but that this festival draws some of the best. They respond by bringing not just, or not even at all, their usual suspects. If you count Iron Hill as seven breweries, which I'd argue you should do, there were 27 local breweries from the Philadelphia region pouring their delights. Ranging from Flying Fish in New Jersey to Tröegs in Harrisburg and Dogfish Head in Delaware to Bethlehem Brew Works in the Lehigh Valley the regions best lagers, ales, and indescribables were pouring. Indescribable? How about a Quintuple from Triumph? Never got around to trying it but it was there. Apparently, it had a lot of alcohol ;-) So was a porter from Iron Hill that was put in a framboise barrel with little buggies. What happened to the porter? Dunno, but it didn't stop me from trying to find it in three different glassfuls of it. Buried beneath the funk and the tart fruit was a porter...somewhere...claimed Mark Edelson. Call it what you like, it was a delicious delight that I won't forget for quite some time. (Speaking of Iron Hill, make that almost eight. If you're in the Maple Shade, NJ area today---that's 5/19/09---between 10am-2pm give or take, you'll get to see brewing history, or at least the beginning of it as the brewhouse arrives and is installed at IH's first NJ outpost. The address is 124 E. Kings Highway. A photo op if I've ever heard of one. Come to think of it, I won't be able to attend, so the first reader to send me a post-able photo of the big day will be rewarded in kind...something kind-a good, I'm sure!) How about the Bill Payer from Nodding Head? Not all too unusual, but one I don't see nearly enough of and one that I really enjoy when I do. Apparently it's currently on tap at the pub, but will likely disappear quickly as it always seems to do. What else? Well, to the tell the truth, I paced myself with a dozen or samples. Enough to enjoy myself without getting crazy (okay, the jockey box diving---see below, way below---was a bit crazy you might say), but not too much so to sap myself before the Sierra Nevada event at TJs rolled around later in the evening. So, I'll apologize for lack of words (y'think?) and get on with the pictures...... 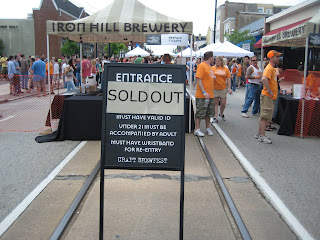 (With 1200 tickets pre-sold, the gate was closed to day-of ticket sales) 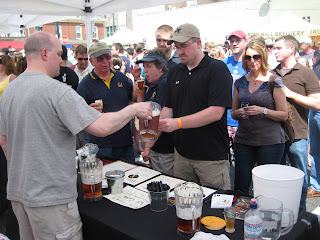 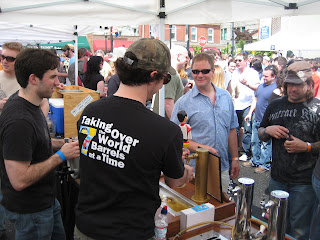 (Was it the beers or Mike Fava's Mojo that tapped out Nodding Head's supply before anyone else?) 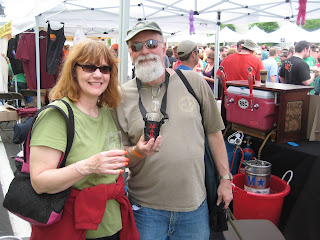 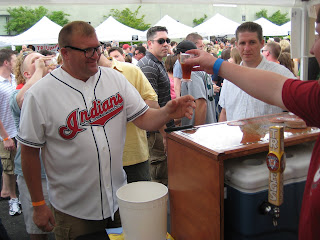 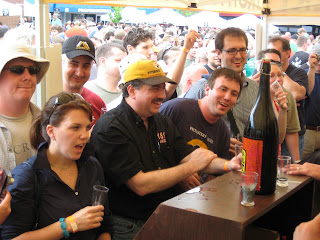 (The crowds were particularly thick, as they always are, around the host brewery...Iron Hill....their hourly R.I.S. pourings didn't hurt) 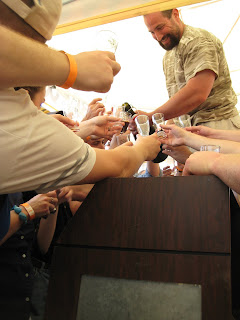 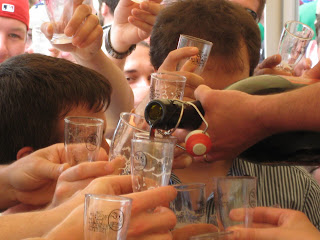 (The heat of the afternoon sun was no deterrent for this gaggle of R.I.S. lovers) 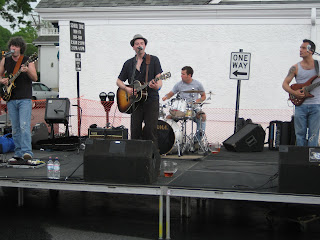 (The band, name?, played on and rocked the alley) 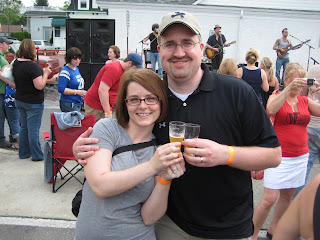 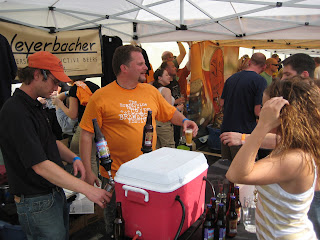 (Mark Edelson, Iron Hill partner, pitches in to help Chris Lampe push out the remainder of Weyerbacher in the closing minutes of the festival) 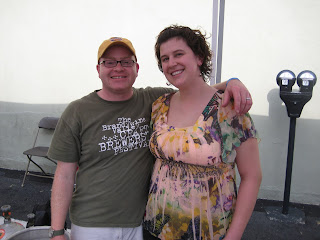 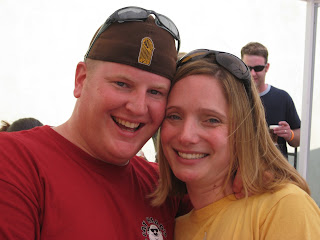 (More brewfest love, this from Nick Johnson of Tröegs and his wife, Meg) 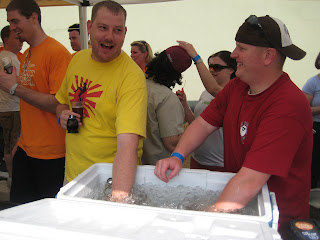 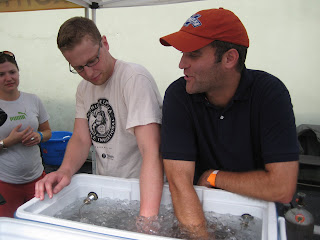 (How many captions are there for this?)
("Not to be outdone by the brewers, the writers get their chance at glory?")
("Look how much cooler we are than Casey and Nick?")
("Stupid Is as Stupid Does?")
("Collin and Bryan were at it for so long, onlookers began walking away?")
("These guys are so smart, they used their writing hands for the contest?")
("The winner gets what?")
Written by Bryan Kolesar at Tuesday, May 19, 2009

bryan, nice of you to wear your victory hat. sorry i missed the event, we have been in colorado.

booboo, I love my Victory hat, but normally prefer to go "neutral" when attending events...but, was out since 7am on errands...with my once-proud head of hair not worth unveiling, I left the hat on....CO sounds like it's been a blast