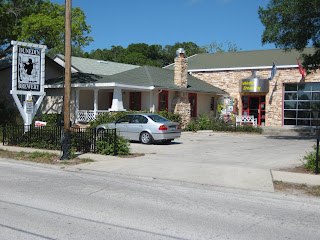 Clearwater, Florida has some nice beaches but not a lot of better beer to be found. Drive just a bit farther north and you'll stumble into Dunedin...home to Caladesi Island, the Toronto Blue Jays during baseball's spring training season, and year-round to Dunedin Brewery. I can't imagine how crazy crowded the small 100+ year Scottish town must feel during winter months and when baseball comes to town. But, during this particular week in April while I was in the area, things could not have been more pleasant. Easy to drive around, easy to poke around the marina, and easy to grab a seat at the brewery for a bit of grub and beer. 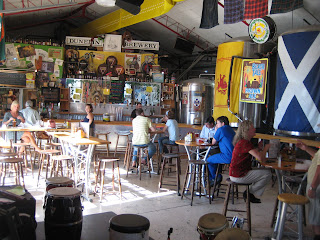 After a quick leg-stretcher around the Dunedin Marina/Edgewater Park and through some local shops, I dropped into the Dunedin Brewery on Douglas Ave. It's a street that made me feel like I should be able to walk into the sand on the beach in no more than 42 steps. But, it's actually a few blocks from the water's edge, and quite a distance from the nearest beach. 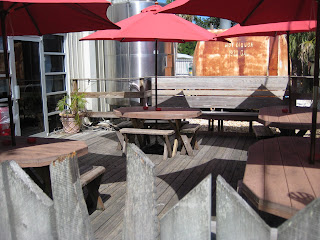 No matter, once inside there are plenty of visual distractions...from the brewhouse on just the other side of the bar to the wall decor. People watching also works well with a smattering of people from (apparently) various careers and walks of life that I saw during my 90 minute visit. During these 90 minutes, the brew crew was putting a wrap on the day's events and informing me that the Rye IPA hiding in a fermentation tank should be flowing soon and still available at the time of my next visit, tentatively scheduled to occur by the end of July. 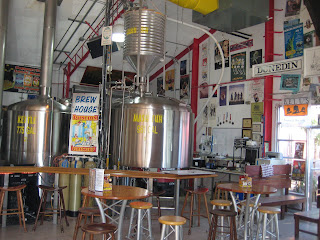 The local beekeeper, who also provides honey for brewing, was there to assist with a bit of a bee problem of different kind. Apparently, some bees set up shop out back, maybe planning to deliver the honey a bit fresher to the brewery. There was also something of an after-hours business meeting taking place, an apparent date between a local and a friend from New Zealand, a couple of buddies having some early evening beers, and a small family eating early dinner on the deck. 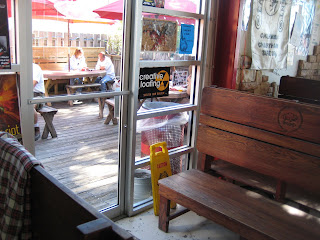 Tiding me over until my dinner was the $1 taco special. Nothing special, just beef, cabbage, cheese, and salsa...for a buck a piece. Accompanied by a sampler of beers for $10, it was the perfect way to end my day of work. The sampler contained 6 beers, plus another couple cuz I'm such a nice guy. At around four ounces each, this seemed like the perfect way to get to know Dunedin's products without the time or investment typically required. But, it was all I needed to know that I'll be back again in the future. 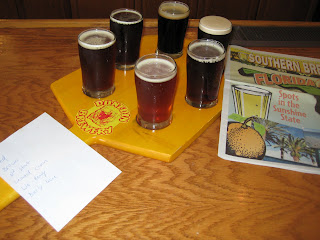 Okay, so back to what was on my platter. How's this for variety in Florida? Red, Brown, Scottish-style Stout, Wee Heavy, Barleywine, a Double IPA, and a Dry Irish Stout. Living in a Scottish town, the brewery makes this evident in the decor and a few of their peat-smoked beers. But, being in the south and near water makes it even more important to have the lighter, softer beers. That led me, of course, to one of their several wheat beers...the apricot I found to be the most palatable and sessionable. Not that the brews blew me away with anything out-of-this-world-ly crazy. But, it was all good...and, that is the most important starting point. Plus it was the beginning of a visit to Florida that would show me just how far craftbrewing and the availability of good beer in Florida has come. Mind you, not that you would argue that it competes with some of the best beer regions in the country. But, compared to 20...10...even 5 years ago, better beer is more available than ever before and that's a very good thing. Dunedin is just one example.
Written by Bryan Kolesar at Tuesday, May 12, 2009

Email ThisBlogThis!Share to TwitterShare to FacebookShare to Pinterest
Categories: Florida

Nice home brew blog. One day I plan to start my own brewery.

Dunedin - isn't that close to to Tampa - will be there next week - are you saying worth a visit to the brewery?

yes, would recommend... It's about 30 mins from the western side of the Causeway where I was staying in the St. Pete side of Tampa. You could also incorporate a drive along the Gulf with some pulloffs along the way to walk along the beach. Would make for a nice roundtrip