As George Peppard was famous for saying in character as Hannibal, "I love it when a plan comes together!" Yesterday was one of those days (and nights) when everything fell together nicely. I hit up the gym in the morning to get in my workout for the day. Check. I carried on through my work day well enough to get out with enough time to spare to first stop home and change. This was accomplished with enough time to park the car at the train station, buy tickets, and then walk across the street to TJs. Check. With just enough time to meet the brewer, have a beer, and make it back across the street to meet my nephew and catch the train into Center City. The train zipped along smoothly enough to get us to Monk's Café 20 minutes before the scheduled start of the Dogfish Head beer dinner which allowed us to have a "pre-game" beer. The dinner went smoothly and we made our way out and back to the train station with just a few minutes to spare to get us back for a one-last at TJs (I believe they call that a T.U.D.) before heading safely home for the evening to do it all over again today. Checkmate. That, my friends, qualified as a well-executed plan where everyone cooperated and played their parts well. But, enough about me. Let's rewind... Prelude to a Great Night The brewer that I stopped in to see at TJs was Matt Keasey, the one man behind the mostly one man operation at Spring House Brewery in Conestoga (Lancaster County, PA). He's got a wide-ranging spectrum of beers that he's been putting out across the production line for a couple of years now. And, he shows no sign of slowing up. With Appalachian Brewing in Harrisburg helping to relieve some of the bottling load, Matt is able to expand into Chester County (hence, the "release party" last night) and Philadelphia (via Muller Distributing, I believe I was told). Other than the Two Front Teeth Saison that I had on draft (a sneaky one at almost 10% abv), Matt had his Kerplunk Imperial Stout, Planet Bean Coffee Porter, Smoked Porter, and Seven Gates Pale being served on draft...and Kerplunk, Planet Bean, and Beyond the Gates DIPA available in bottles. Some of it still remains today, so I'd recommend hopping on it quickly if you hope to see any of these before they come back 'round again. On to Dogfish, Monk's, and yet another Prelude To the meet/meat of the night, so to speak. This was a fun night for me as it was the first time heading out to an event with my nephew Ryan. He's experienced with many of the usual suspects from the Dogfish Head stable, so he seemed like a natural candidate for wingman last night. And, he was up to the challenge. We've tossed back some casual beers together before and he'd been to Monk's once, but this was his first time at a sit-down beer dinner and it was a great chance for him and me to catch up...so, all around it turned out to be a great evening. There were still several Hopfenstarks available on tap from the Monday debut at Monk's of this Canadian brewery. This is yet another example of a brewery from Québec doing some very interesting beers. And certainly is just another reason that I need to find myself one of these years at Mondial de la Bière. We sampled a Saison and a Framboise from Hopfenstark. The refreshing saison had a nice hop edge to it, while the Framboise had a very pleasantly understated fruit flavor to it. A little "slick" for my liking, but still a nice refreshing beer to begin the night with. Both were low in alcohol (especially relative to the Spring House saison I'd had to begin my night!), so not a bad way to ease into the Dogfish Head-themed dinner, which promised higher ABVs for sure. 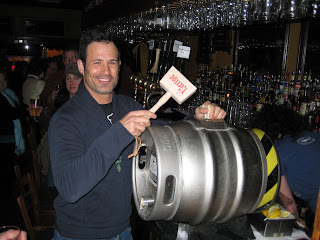 I think DFH owner Sam Calagione mentioned somewhere in the beginning of his welcome that the average ABV coming out of his portfolio of beers is in the 9% range and that he averages six ingredients per beer. Other than that interesting statistical tidbit, Sam spoke for a few minutes but then moved on to the back room before allowing the evening to get underway. Sam certainly made the table rounds during the night, something that he is very good at. But, I was a bit surprised to hear him not take the mike once more during the night. The Dinner After making socializing rounds between friends and a smattering of writers, distributors, publicans, and historians, it was time to sit and get on with the dinner. Tom Peters is still overseeing the kitchen duties; he and the crew had last night's dinner ready to roll just a little after the scheduled start time. The first four courses were paced real nicely, with a bit of a longer gap between the last three courses. 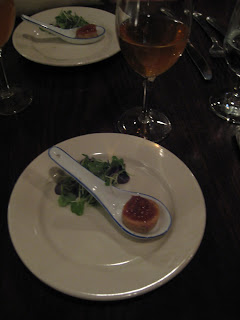 The dinner kicked off with what may be one of the most oft-included menu items for beer dinners at Monk's: foie gras. For this dinner, this creamy morsel of meaty goodness was topped with a peach compote which made the pairing with the Festina Lente all the more perfect. This beer was first unveiled in 2004 and the stash of remaining bottles "out there" is certainly dwindling. This dinner helped to quicken the pace. Both Tom's and Sam's cellar contributed to this one and it has held up quite well. The fruit-forwardness of this beer also made it a nice accompaniment for the dessert course almost three hours later. As much fun as I have with these dinners trying new flavors and discovering new pairings, it was fun to watch Ryan dive into beers that he'd never had before and maybe had not even heard of. He's far from a newbie in the world of well-made beer and I'm far from a seasoned expert, but there's definitely an extra element of fun seeing a beer dinner through someone else who's not had particular beers or foods in the past. 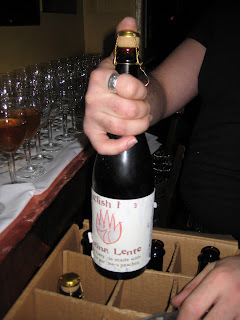 With the second course, Pangaea made an appearance. As interesting as this beer is and well as it went with the food, I think the food on the plate for this course really jumped out ahead of the beer. An egg stuffed with some creamy roquefort sitting atop a piece of scrapple and dashed with cayenne pepper had me thinking alternatingly breakfast and scotch egg. The ginger used in this beer is quite obvious and some earthiness is less so, but they both complimented the food well. A good thing that is, since I couldn't find another course of the dinner that this beer went with, partly so perhaps because as the beer warmed, it really seemed to lose a lot of its appealing characteristics. Drink this one cold. Next up was the (fresh) hoppy delight that the 75 Minute IPA is. This is a unique recipe (not simply a blending of 60 and 90 Minute IPAs as we'd been told by a bartender in Virginia a few weeks back!) and was served cask-conditioned last night. A perfect pairing with the sweet and spicy rollup of pork belly and uku (Mr. Google tells me this is a deepwater snapper). I'd love to see this chinese pancake, as it was called, on the menu again. I was glad to save the 75 Minute IPA as it went nicely with the next two courses as well. I'm not sure that I can recall a pasta dish being served during a beer dinner at Monk's in the past. Probably, but not that I can recall sitting here now. In any case, it was served with the Black Thai, one of DFH's newest beers. As I'd said, I was glad to have enough 75 Minute IPA to go with this dish, as it did go quite well. The Black Thai, though, I'm not quite so sure about. There's soybean, thai basil, and lots of blackberries involved in the making of this beer which is finished by a lager yeast. They call it an imperial stout on the DFH website, but I've gotta tell you, I couldn't wrap my head or palate around this one; I need more research. This one just wasn't resonating with me, either by itself or with the food on the plate which also had a little heaping of basil perhaps to try and tie things together. 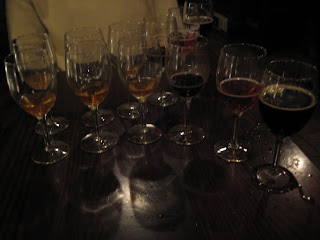 As if this wasn't enough (enough is never enough at Monk's...and I'm not sure that anyone's ever complained), we got to the next course and a very nice serving of filet mignon. It was served with Red & White, still probably a top 5 DFH beer in my book. While this went pretty well, I fell back again on a couple of sips of 75 Minute IPA that seemed to treat the tender meat just a bit better. But, the Red & White was coming off the tap so there was plenty to go around...and it's just so very, very good. Don't think for a second that this guy's glass didn't get refilled more than once! And that's that Then, dessert...oh, sweet dessert. This was a nice and simple pastry with what I believe were caramelized apples on top. And while the Palo Santo Marron (also a top 5, likely a top 3, DFH beer in my book) was a real nice dinner capper, this is where the last two sips of my Festina Lente were saved for. Once again, a very fortuitous saving. With our firm intention to catch the 10:45pm train (ah, the joys of suburban living, ggrrr), we made quickly from the table to the door saying just a few goodbyes and well-dones in between. It gave me a chance to have a few whispers with Tom about potential Philly Beer Week dinners at Monk's. Ah, but we shall save that for yet another day. Until then, Bon Appétit! Amuse Bouche 2004 Festina Lente ~ Foie Gras Torchon with peach compote First Course Pangaea ~ Scrapple "Toast" with roquefort deviled egg Second Course 75 Minute IPA Firkin ~ Chinese Pancake with pork belly, uku and scallion, cilantro, and plum sauce Third Course Black Thai (draft) ~ Pasta with tomato concasse with shaved fennel, garlic, chili d'arbol, and basil Fourth Course Red & White (draft) ~ Filet Mignon with pinot noir sauce, herb roasted bliss potatoes, and young bulls blood beet tops Fifth Course Palo Santo Marron (draft) ~ Tart Tartin
Written by Bryan Kolesar at Wednesday, February 03, 2010

This was definetly a Tuesday night to remember. The plan did come together in all the ways that it needed to to make the night a success. It was nice to hang out with Unky Bry and have a few foods that I never tasted and a few beers that were even more pleasing since they were matched with such great food. It was nice to have a little bit of each of the beers to taste with each of the courses since some did match well with others that they were not originally meant to pair with on the menu. I loved that meal that Monk's was able to put together and I can never say enough about DFH. Still one of my favorites. Let me know the next time you have a open seat. Love to go again.

sweet! I was wondering if maybe you didn't have a good time, ha ;-)