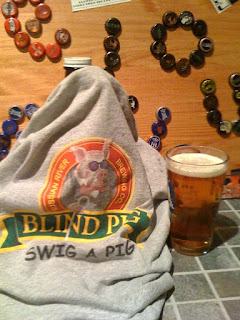 In the past 24 hours, I've been asked many times if I'm mad or upset about the San Francisco Beer Week trip falling apart due to Mother Nature's folly here in the mid-Atlantic. Funny how I've convinced hardly anyone that, while a bit let down, I'm really not upset about it. Don't get me wrong, all of the build up, the planning, and especially the Beer Run event that I co-planned to occur on Saturday at Magnolia Brewery has caused me to feel really disappointed and let down...yet not mad. Life is full of this sort of thing; to be mad would be wasted emotion.

So, what am I gonna do instead? Well, let's see. I'm going to find a way to celebrate SF Beer Week here in the Philly Metro area over the next four days. I was expected to be out in SF last night enjoying perhaps a taste of Anchor at Pi Bar, Lagunitas at Toronado, or some leftover beer from the Beer Dinner at Monk's Kettle. They were featuring the SFBW Collaborative Brew called Imperial Common, one that I was really, really looking forward to trying.

Today, I was hoping to bop around the city getting some good tastes from Pi Bar again, this time with a 5-year vertical of Drake's Jolly Roger Holiday Ale. Then, a quick stop for a sampling from Bear Republic at Zeitgeist before heading off to dinner.

Tonight, the plan was to partake in yet another decadent dinner with The Home Brew Chef, Sean Paxton, and Alan Shapiro of SBS-Imports. He had 8 courses of food planned to go with 9 beers from the De Proef Brewmaster Collection as well as Firestone Walker...a dinner that was to be capped with the FW XIII Anniversary Beer. If I had any energy left over after dinner, I was hoping to check out Beerlesque at Paradise Lounge (you just know Shmaltz Brewing had to be involved with this one!).

This, instead, is how I'm celebrating my first day of SFBW. I stopped off at The Drafting Room in Exton for a growler fillup of Blind Pig IPA from Russian River Brewing Company in Santa Rosa, CA. If you haven't followed closely enough, then you don't know that this is one of my favorite straight-ahead (west coast) IPAs in this country. It's a beer that's been around for quite a while and at 6.0% ABV and 72 IBUs, it's such a tasty beer that doesn't blow your palate and that you can drink most of the night long. In fact, I'm sure that Patty and I will have no problem polishing this off tonight.

Otherwise, it will be a low-key night as we recover from all of the bailing out of our house we've done over the past week. 42 inches of snow has a way of wearing down the body, but not the spirit. We won't eat as extravagantly as I would have tonight in SF, but perhaps will save that for tomorrow night or Saturday.
Written by Bryan Kolesar at Thursday, February 11, 2010

you get the good attitude award. maybe we should plan events in philly to correspond with other cities' beer weeks. think of the money we'd all save and the bad airline food we'd be spared.