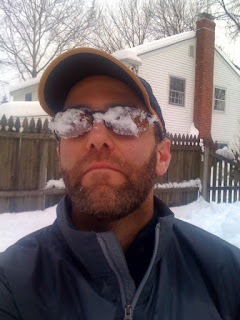 (A bit colder here in Philadelphia than San Francisco)
After weeks of working with Brian Yaeger and Derrick Peterman, we finally got a Beer Run organized to start at Magnolia Brewery in San Francisco's Haight District. The Haight is a fun neighborhood, in some ways still oozing the same vibe as 40 years ago and in some ways moving on. With the incredibly wonderful beers (especially cask-conditioned beers) that Dave McLean, Ben Spencer, and the crew are pouring (not to mention the new kitchen's endeavors), it was a no-brainer.

Dave was particularly accommodating, Beach/Park Chalet not as much so. We'd envisioned a run that would end at the ocean in the "back yard" of Beach Chalet brewery and restaurant. This didn't work out, so I'm anxious to hear back from Brian and Derrick how the run from Magnolia through Golden Gate Park and back to Magnolia went.

To continue my weekend of not being in San Francisco, I'll do likewise and join my fellow runners in spirit. I went out for a run today. It was close to 4 miles; I believe they did around the same. They had some beer afterwards; I did the same. They wore light clothing; I, on the other hand, did not. The temperature in SF was around 60f and here in the Philly area it was 30 degrees, or so, colder. Their choice of beers at Magnolia ranged from Strong Beers (Month) to Saison de Lilly (the one I was gonna be huntin' down) to California Kölsch (Derrick's choice). Here, on the sunporch, I had some thirst-quenching Victory Prima Pils. So, I dunno, I guess it was pretty close to a tie, except that I ran solo here at home.

The remainder of my day was going to be spent down the street from Magnolia at Toronado where I would sop up the atmosphere of barleywine, hundreds of kindreds, and maybe sausage or pizza from either neighbor of Toronado's.

After getting a proper shower, I'd planned to head out for the night with no particular plan except knowing that Elysian's Dave Buhler is going to be at ChurchKey, which is not from the Rogue Ales Public House and La Trappe. Over in Oakland at The Trappist, Vanberg & Dewulf is pouring such tasties as Saison Dupont, Foret, Avec Les Bons Voeux, and Witkaps. And, if the big beers of Toronado's Barleywine Festival didn't completely blow my mind and palate, then heading over to 21st Amendment for a taste of Strong Beer Month might have been in order.

Today back here in Philly Town will be a bit more lowkey for me, I'm thinking. Not sure exactly what this night will bring for me, but it will probably involve cooking a nice meal and having a few good beers and trying to let my body heal. After a week of shoveling, sledding, traveling, sitting (at work), and running....my quads, calves, hammies, glutes, delts, tris, bis, lats, and heck my brain all are fatigued.

Last day of SF Beer Week tomorrow. Let's see how I can match things here on the East Coast. 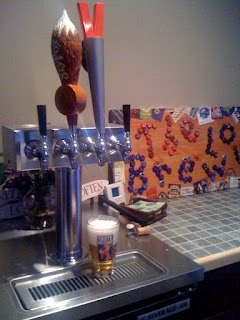 (Just rewards after a good run)

What is the point of pretending you are not missing being in SFO? You are just making up your own irrelevant beer week.

Seriously? You may be the only one missing the point--in any case I'm sorry if you've not found these SFBW-related postings either informative, useful, entertaining, or otherwise worth your time. I've got another one or two days worth of postings ready to roll, so you may not want to check back around here until Tuesday.

Hey Bryan, we had a pretty decent turn-out for the Beer Run yesterday considering what little advance notice we gave folks. You would have had a good time, but great to see you found a way to have a San Francisco Beer Week Run anyway. I expect to have a post up on it tomorrow.

Derrick, that's great to hear! And it's been fun to "play along at home" :)

For certain, I know that you can find Victory (30 miles west of Philly) and Dogfish (a couple hours south).

You may even find a "care package" from Philly wind up on your doorstep at the beginning of June!

Hope the California Kölsch tasted better than ever yesterday.

I wish I could have been there too for the SFO Beer Run. Cheers to having your own!