Iron Hill at Earth Bread, Sly Fox at The Drafting Room....And Much More

As further evidence that Philly Beer Week is really just a bit of an exaggeration of what happens around these parts on a weekly basis throughout the remainder of the year, I've been pointing to the first two weeks of March...the former home to Philly Beer Week. But, let's take a look at a week of 8 days (because we are calendar-challenged around here), the one that began last night (Thursday)...in Exton at The Drafting Room and over in Mt. Airy at Earth Bread + Brewery. 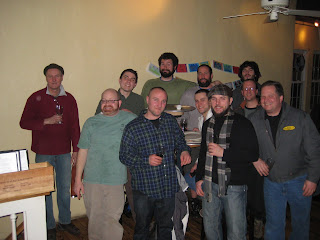 I started off by checking in on the festivities at EB+B where Tom & Peggy were playing host to the Iron Hill Crew. I lost count of the number of IH brewers at 10, counting the big guy Mark Edelson too. Bob Barrar's acceptance speech was of heartfelt gratitude for what he considered the most humbling award ever. But, instead of just another tacky medal, the kicking of his Bourbon Porter before any of his colleagues' kegs kicked earned him a crown of dough (unfortunately, not of the monetary type). 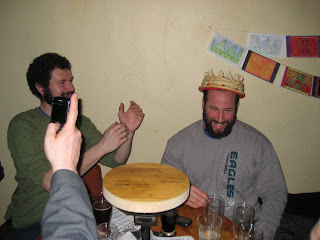 Earth is a place that I'm so happy exists but rarely ever get to myself. And, I think that's the way it's meant to be and should be. I wish that Philly had 20 more places like EB+B. Places meant to service the community within a 10-20 block radius, not a 10-20 mile one. Granted, they're happy to see people like me make the trek to come and visit them, but I'm not their bread and butter. 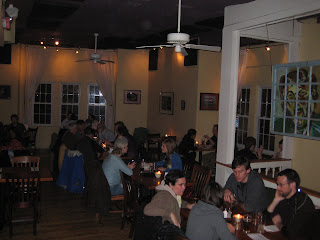 They bring quality food and beverage to their customers in a family-friendly neighborhood gathering spot kind of way that weaves them into the daily fabric of life in their community. These are places where usually the only place to find their beer and their food will be under their own roof. There should be at least one of these in each of Philadelphia's ever-so-distinct neighborhoods. 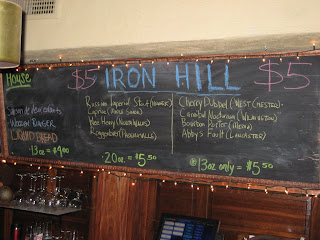 I got the word that Brian O'Reilly and Corey Reid, among a few other stalwarts, were still holding court at The Drafting Room in Exton. At the same time the IH/EB+B event kicked off 30 miles away, Brian and The Drafting Room were spilling as many as 10 Sly Fox beers from the draft system. It sounds like it was quite the scene earlier in the evening. I strolled in for an hour and a bit of kibitzing before finally calling it quits for the night. 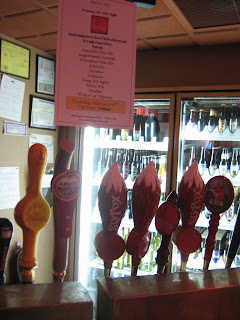 So, that's quite a night of beer events, albeit just two, in the Philadelphia region right? Rather worthy of being called PBW events, I'd suggest. Then picking right up where Thursday left off, Friday rolls out Jose Pistolas hosting a Tröegs Beer Lunch in Center City Philly and Capone's out in Norristown throwing a 2nd Anniversary party for Boak's Brewery from New Jersey and some of their favorite beers. Saturday? Oh boy, Saturday. Take your pick. Start in Maple Shade at Iron Hill's Mug Club Membership Drive that doubles as a release party for The Situation. Hilarity is sure to ensue. In the City, the Institute is throwing a 5 hour affair of Pigs, Yards, and Pints. If you feel like walking, there's a Walking Beer & Cheese Tour of Old City. And, the Beer Olympics continue at Devil's Den with a beautiful vessel of Edmund Fitzgerald Porter from Great Lakes Brewery. I need to get confirmation of whether this is cask-conditioned...which I thought I'd heard somewhere. There's no need to roll out of bed early on Sunday, because Dr. Joel of New Holland Brewery reppin' fame is hosting a Brunch at Teresa's Next Door and they dropped the timed sitdown aspect of it. So now, roll in whatever time you'd like and order up some great Sunday morning/afternoon beer and food. Tomme Arthur gets the lay of the land on Monday at Memphis Taproom, which will serve as a warmup for his Lost Abbey/Port Brewing dinner on Tuesday night at Monk's. Thirty miles west on Tuesday, Victory is getting together with DiBruno Bros. Cheese for a pairing event at Avalon Restaurant in West Chester. Craft Ale House closes out the week with a Night of Stone Verticals that will include Barleywines, Russian Imperial Stouts, Vertical Epics, and Double Bastards. This sounds like a 'designated driver' kind of night. And, just because we're a bit calendar-challenged around here (do recall that Philly is the Beer Week that set the beer week standard at 10 days), Earth Bread + Brewery, not content to rest on the success of the Iron Hill night, will bring in some guy named Sam Calagione on the 25th to talk about his little known Dogfish Head beers. This rounds out just another 8 days of good beer-drinking time in Philly. See what I mean? Any given week can be Philly Beer Week in Philadelphia.
Written by Bryan Kolesar at Friday, February 19, 2010

Nice article, Bryan. Ahh, makes me proud to live in this area.

thanks, Mike. I was wondering if we might bump into each other last night at Capone's. No matter where you go around the region, things look (and taste) pretty good! Keep up the ambassadorship!