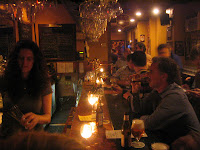 SUPERLATIVES! SUPERLATIVES! Oh, what superlatives to use to describe the most recent beer dinner at Monk's in Philadelphia, PA featuring Dogfish Head beer. If you've grown too accustomed with 60 Minute, 90 Minute, Indian Brown, Chicory Stout, (zzzzzzzz, heheh), then this was the night for you. And, if you missed it, what a shame.

If you saw the menu that we posted here prior to the dinner, you should have seen that it would be a different (shall we say, off-centered?!) evening.

We're going to try a new format here. Since we both experienced the dinner together, we thought to put up our comments here as a conversation to recap (and piece our memories together!) the night. So, here goes...

Adam: Where are we going tonight?

I feel a bit let down.

: It was certainly a of the beer calendar this year, wasn't it?

Adam: Yeah I was thinking it will be hard to rank this relative to the dinner (read more here) at Monks.

: Which reminds me that and Lost Abbey are just around the corner, but let's not get ahead of ourselves.

Adam: Agreed, we haven't even talked about last night.

: It was a fun train ride down with Patty and Kathleen and a great leadoff at Nodding Head with the 60 Shilling, Sled Wrecker, Double IPA, and The Donkey.

Adam: It was a great start. Nothing too heavy, but, something to whet our appetites.

: A good way to break in our palates, eh?
Too bad we couldn't sneak off with any of the private party's appetizers.
Cause I was hungry.

Adam: Nice night to walk around town. Just a bit brisk. A good night to step off the street into the cozy confines of Monks.

: And, judging by the early crowd, the anticipation was high as other beer lovers and the DFH crew were already indulging in pre-dinner beers and comaderie.

Adam: I was happy to see some familiar faces. Each time I feel more at home.

: Yes, for sure, the regulars were out and Sam was already in top form, along with some of his crew Matt Webster and Mike Gerhart. So, by this point, we've already got a few beers under belt and the "official" dinner hasn't yet begun. Yikes....

Adam: We were a bit wary about our seating at the bar instead of a table, but, as you'll find out it didn't hinder us at all. So this was the big question, "Should we have another beer before we get started?". That was a tough call considering all the big beer on this menu.

: Oh, that reminds me, you really enjoyed the Corsendonk Christmas, didn't you? I had it a couple of weeks ago at Bridgid's and was happy to see it again at Monk's.

Adam: Yeah, it was awesome. I liked it because it wasn't over the top, but, it still tasted like a Christmas Ale. Perfect, sort of a calm before the storm.

: Good segue...As usual, George Hummel kicked things off with an introduction to the night. (Seems like the microphone thing has not yet been figured out, but minor issue) Knowing that Sam wouldn't be upstaged, he quickly yielded the mic to Sam.

Adam: I would have to say at this point it felt like all the pieces were falling together. Just one more facet…the food. 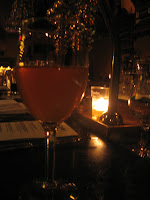 : The first course was a nice intro to the night with the Jiahu and Amuse Buche. I'd say I probably enjoyed the combination of it with the foie gras the most. The others were nice too, but the foie gras was just so smooth and flavorful and matched nicely with the beer. Did you have piece of the course that you enjoyed more than another?

Adam: So how do you start a DFH dinner at monk's? With Dogfish Head Chateau Jiahu, snail, goose liver, mussels in a bath of pureed squash.

: Yeah, I would say the squash alone may not have been a great pairing, but that still didn't take away from being a very good first course.

Adam: The best bite was the mussel and squash washed down with an interpretation of an ancient brew, Chateau Jiahu.

Sam tells a great story about how they collaborated with who was it again?

: I believe it's the archaeology school at the . That's the great thing about a DFH dinner. You get a unique food experience from Monk's, great beer from DFH, and Sam the storytelling man to give the context of the beer that is being enjoyed.

Adam: Yeah, I'd love to hear the story of how Coors Light was created. Somehow it wouldn't be with the same. Unless it went a little more like one of the next beers, Golden Shower.

: Yeah, speaking of stories, fortunately he didn't go too far in telling the story (or perhaps the embellished story) of how the Golden Shower came to be called. But, wow, the next course certainly did step things up.

Adam: It was called Prescription Pils at first right?

: Oh, yeah, that's right, I forgot about that part of the story.

Adam: The federal gov. rejected it saying that it may appear to make healthful benefit claims.

: This beer was a bit bigger as was the companion Golden Revolution, but not so big as the scallops, you think? I'm not sure if I've had scallops that large before. Wrapped in bacon and topped with a spicy aioli, at some restaurants it could have been a meal by itself.

Adam: Yeah, we were really hitting our stride a bit early at that point. The scallops were awesome. The Golden Revolution had some honey and ginger overtones. Maybe it was the high abv and the choice of hops. Mmmm....and the golden shower was delicious. Reminded me of 120 Minute IPA.

: I see from the DFH website that next year they'll be calling the Golden Shower instead the Golden Era. Do you think they're trying purposely not to be as "ballsy" anymore? Sam, really, you think?!

Adam: Heheh...maybe the Michael Jackson segment on David Letterman put it over the top. Maybe he has heard too much backlash...day after day after day.

Adam: So...its getting a bit late. We should probably wrap up for tonight. Kind of a shame really. My favorite beers of the night are yet to come. 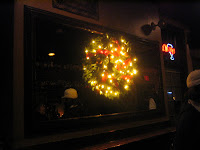 : I know what you're saying. For as great as everything was leading up to this, I believe my favorite two courses were the third and the fourth. And the story to go along with the Baltic de Belgium is one of beer lore. So, let's finish this off tomorrow and our readers can check by on Friday for our discussion of the remainder of this wonderful evening at Monk's.

Adam: Yeah...somehow I can't find words to really explain how much fun I had.

Adam: At least without swearing at the same time ;-)

The conclusion to our comments about this DFH dinner at Monks including more pictures.

I had a very good time at Nodding Head when I was in Philadelphia.

Sounds like you guys got your nights worth so far.