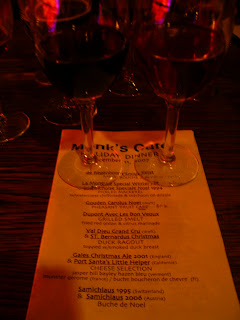 2007. It was a very good year for Monk's. In addition to the opening of sister restaurant, The Belgian Cafe, Tom, Fergie, and crew at 16th/Spruce hosted no less than 14 events. The all-star lineup of beer events/dinners to celebrate Monk's 10th anniversary included Vinnie & Natalie (Russian River), Tomme (Port/Lost Abbey/Pizza Port), MJ, Garrett (Brooklyn), Eric & Lauren (New Belgium), Stephen, Lucy, Ed & Carol (Stoudt's), Rob (Allagash), and Sam (Dogfish Head). How many of these did you know by first name alone? That's what kind of lineup it has been this year at Monk's.

Last night, Tom & Fergie hosted their always-anticipated Holiday Beer Dinner. The gems that Tom pulls out for this event are usually only rivaled by what he finds for New Year's Eve. I don't believe I've ever had a beer thrust in my hand any faster than last night when I walked through the front door. The "Welcome Beer" was a ten year old Anchor Christmas Ale. While the usual holiday spices found in Anchor's annual spice treat have become muted after ten years, it was still a smooth sipping beer, with dark fruit and prune flavors dominating.

To tell the truth, I don't feel much like writing about the nuances of the remainder of the evening. After all, it's already passed and there's nothing you can do about it if you weren't also there. And, really, it's not like I need to mention yet once again how spectacular of an evening most of these Monk's dinners turn out to be.

So, instead of waxing poetic once again (or at least attempting to!) I'll simply leave you with a copy of the menu below and the reminder that if you haven't yet been to a Monk's dinner, you should put it on your list of New Year's Resolutions for 2008. It is that time, isn't it?

Oh, maybe I will add just one little extra tidbit that I learned from Mr. Bryson's mistake. Don't ever leave your writer's notebook sitting unattended while you take your, ahem, "bio break" (is that what you call it Jack?)...you'll never know what phantom notes show up that you'll scratch your head over the next morning! 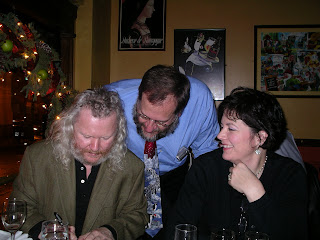 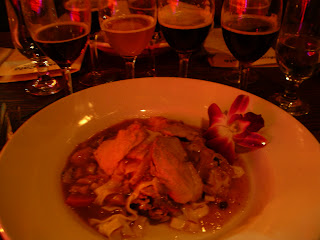 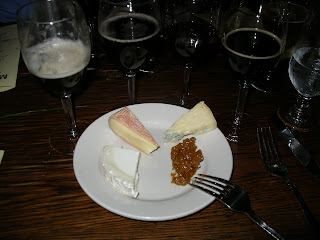 Where am I? (rubbing eyes and scratching head) All I remember is that I was reading the menu for the Monks dinner and...(thunk)...

...sheesh...it happened again. What the?

Heheh...sounds like you had a great time :-) Quite the line up eh?

Staggering would be one word to describe it!

Yes Bryan, my number one New Year resolution will be to attend a beer dinner at Monk's :>0

Out of all the Monk's dinners I have had the pleasure of going to, never once have I made the Holiday Beer dinner but this one sounded great. Samiclaus 1995? They really know how to send you off for the night on a high (abv) note! The food looked good too.

How did I miss you? I was in one of the pew booths in the middle dining area.

La Binchoise Noel from 1993 was my favorite beer and the
The ginger covered sprig of rosemary was tops in the food department.

So, SEW, you couldn't have been there! Both Patty and I were there, in the front dining room, both went to the bathroom a couple of times each and never saw you.

There, it's settled....you weren't there and you probably showed up later and still were able to sample some left over beer...hardy har! ;-)

Seriously, though, that sucks that we didn't see each other...On another IH note, we walked from Suburban with Jean.

I guess I didn't mention my faves of the night. Would probably have to say the La Moneuse, Port, and Sami '95....no particular order.