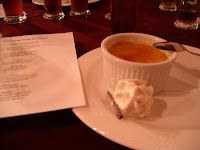 Talk about procrastination (like I did a couple of weeks ago)! I swore I wouldn't go to another beer dinner until I wrote about the last one at Union Barrel Works. There was nothing wrong with it, so why has it taken me so long...dunno? I guess I sorta made a fibber out of myself going to and writing about the Shelton Biere de Garde Tasting at Chick's last week. But, it wasn't really dinner, so maybe I'm off the hook?

Dennis and I attended again, but this time with two other guests. Adam came out of The Brew Lounge retirement for a reunion tour of sorts. (He's still eligible for his pension.) And a co-worker, intrigued by the wild game and beer concept, joined us as well. Like last time, we used the extra half hour on the front end for a whistle-whetter at Stoudt's. Also repeating history, we arrived as Matson and company were bellying up to the bar after a day shift of brewing. We polished off a tasty winter ale (porter) and moved on down the road to UBW.

The dinner event got started a bit late, and that created some mistiming of the first beer pairing with the food...in other words, I had but a few drops left to drink when the first course of food arrived. But, the staff got back into the smooth swing of things as we experienced back at October's dinner. All of the staff, that is, but Tom. That guy, I tell ya. After I finagled a picture of he and family at October's dinner, I think he was steering clear of me this time around. Well, okay, to be fair he really did stop by several times to ask how dinner was going, but boy did he keep an eye on the camera sitting on the table and the movement of my hands toward said camera :-D

Nods this time around, from my taste and perspective, must go to the soup course where the chunky duck meat and broth matched up nicely with the roasty, medium-bodied stout. The sorbet was a nice sweet intermezzo clearing away the gumbo spices to make way for the jambalaya. Though, I couldn't really pick up on the maibock in the sorbet, there was full glass it sitting just off to the side. What a great maibock that is, indeed. And, the dessert...what can I say about the dessert? All good beer dinners that I've attended end with a triumphant finale and this was no exception. Of course, requisite picture is posted here as proof.

Letting me down a bit, though, was what I was anticipating as the highlight of the meal. The ostrich, for my taste, came out a bit too overcooked. My experience with ostrich has been that the better prepared ones can be practically cut with a fork, with flavor oozing out of every morsel. Meanwhile, its companion, the Double Barrel, described as a vienna lager, seemed a bit high on the alcohol...once again, for my taste. Coming in at close to 8% ABV, it overwhelmed the grain a bit too much for me.

So, while the one course did not live up to my expectation, the dinner on a whole did again this time. Tom, Amy, David, and the entire staff has pulled off two well done dinners in back-to-back months and I'm looking forward to their next one in January.

Now I've got closure on this one and can finally move on :)

I really do need to get some more of that Stoudt's Winter...mmmm.

Picking a case worth of big bottles from your stash is a very generous pension. Thank you ;-) Heheh...

Ok, getting on topic...I really do love Union Barrel Works. I think it has a lot to do with seeing them grow with style. The beer, atmosphere, location and their creativity really stand out.

About the dinner...the Maibock was delicious. The sorbet and the Creme Brûlée stood out on the food side followed by the wild boar sausage. I should see if I can get that recipe for the sausage...