After Wednesday's day of work, I made a quick stop at The Wine Club on Harrison Street to pick a bottle of wine and a styrofoam shipper for a magnum-sized bottle of Anchor Barrel Ale (yeah, you already saw it in the picture, didn't you?!). The Wine Club is consistently a great place in downtown SF to pick up some harder-to-find indigenous California wines at reasonable prices. (No club membership required; they're open to the public.) This time I picked up a 2007 Dry Creek Valley Zinfandel from Bonneau. Looking forward to trying it; maybe with an upcoming Birchrunville Store Cafe dinner back here at home.

Just a few block walk from The Wine Club in the direction of the Mission District is the City Beer Store on Folsom Street. Figured I had a couple of slots left in my beer box to take home with me. Of course, I overbought and ended up needing to stuff a couple in and amongst my suitcase of clothing. Best intentions of a quick trip, of course, went by the wayside when Chris Cohen (a new friend made during the Great SF/Philly Beer Tasting & Meetup) called out to me inside the shop. 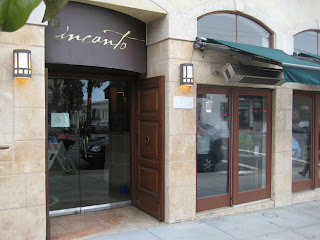 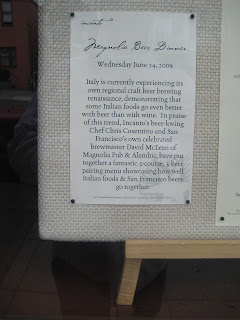 So, naturally, we sat down and had one beer. After that, it was a hustle back to the hotel room to then turnaround and head out to the Noe Valley neighborhood. The J-Church Muni line deposited us easily on Church Street just steps from the front door.

Incanto Italian Restaurant on Church Street was hosting Dave McLean's Magnolia Brewery for their first ever beer dinner. By the end of this, you'll come to understand how this became quite possibly....

Don't get me wrong; I love slow dining. Have done it in Europe on numerous occasions. There's no need to rush through eating, particularly when its good food and good drinks with good friends. Though, actually, our lifestyle here in the States often demands rushed eating. That's often a shame. Whether it's our own over-jammed schedules or establishments desire to turn tables faster, a dinner rarely takes much more than hour except perhaps on special occasions...special occasions which are frequently too few and far between.

I don't actually believe it was Incanto's intention to create a 210-minute dinner for our table of six. Even if our group drew things out just a bit longer, judging by two-tops seated around us who were there at least 2 1/2 hours, the dinner certainly went on longer than the two hours that was advertised by the restaurant when I made the reservation. 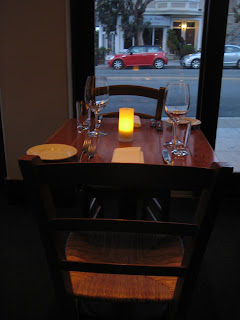 The reason I've gone now into a third paragraph on this point is more from a lesson learned perspective rather than a complaint. Though, any plans we thought we might have had for the remainder of the night were now out the window after the dinner was completed.

Whether it was that the special beer dinner menu was being served all night long (it wasn't a fixed-time dinner) or that it was being served in addition to the a la carte menu (one out of six at our table did not have the special menu), it appeared to overwhelm the kitchen. Overwhelmed to the point that, while we didn't have the stopwatch running, between two courses we were pretty sure it was 45-60 minutes gone by. And, unfortunately, the one-pour-only beers were not well-timed with the dishes from the kitchen.

Okay, phew...sorry if I rambled on a bit there because, wait for it......we all had a great time at this beer dinner. And, when I say we, I'm referring to the party of 4 that Dennis and I were invited to join. I've described earlier in this series of 6 postings how the San Francisco Beer Scene reminds me much of Philly---it's difficult to go anywhere without running into people you recognize.

Case in point, after arriving at Incanto it wasn't too difficult to recognize Dave McLean at the end of the bar. Going to this dinner was my primary way of making up for not stopping in at Magnolia during this recent trip. That was a tough thing to do, considering I was really looking forward to checking out their Branthill Malt Project that they've been working on this year.

A few minutes after being seated at our little table for two, I then recognized Jesse Friedman (beerandnosh.com) and Sean Paxton (homebrewchef.com). It wasn't long before we were invited to join Jesse/Elianna and a tableful of good beer and food mates. 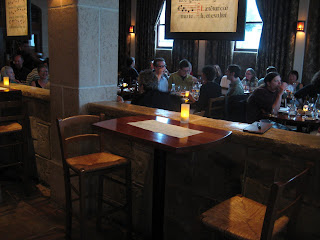 Sean was on his way to catching the red-eye to Maine to help with the opening of Lion's Pride in Brunswick, so unfortunately he was not able to join us. Still, it was a table full of great people with whom to share great food and beer. So, you ask...how did the dinner and its pairings go? Did you think I'd ever get to it?! 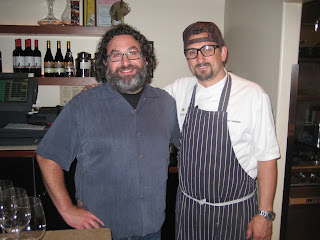 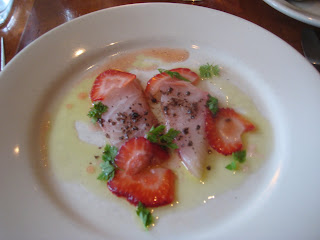 ~Kampachi crudo, strawberries, and vanilla salt served with Magnolia Half Step Hefeweizen
The dinner started with a smashing first course of Strawberries and raw Kampachi which was highlighted by the Vanilla Salt. Or was it vice versa? Overall, this course worked nicely with the light hefeweizen beer. Some hefeweizens are just too...let's see, too hefe, at least for my liking. This one is not and therefore it let the dish of food sing nicely alongside the beer. Then we waited... 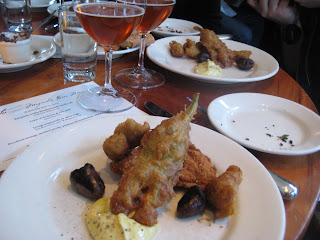 ~Fritto of duck bits & IPA aioli served with Magnolia Spud Boy IPA
Duck Bits. Hm, let's see...What might we expect from a chef who practices the art of offal? What we got was a plate with various pieces of duck organs, none more pleasing to me then the heart. To tell the truth, I'm not entirely sure what some of the other pieces were, though I'm assuming the one was a slice of liver. But the heart...this slightly tender and flavorful, and full of protein, organ made for a nice bite-size morsel of goodness. This was the only bit on the plate not to be fried, which I believe helped to accentuate the flavor. The other pieces, I felt, simply got lost beneath the fried layer of breading. The IPA did fine to scrub away the fried and aioli flavors, but I think I would have preferred the Proving Ground IPA which, particularly on cask, is one of my Magnolia favorites. 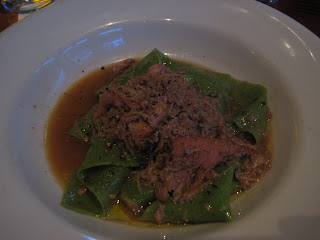 ~Lovage pappardelle & rabbit sugo served with Magnolia bourbon barrel-aged Weekapug Gruit
Ah, the papparadelle and rabbit was next. This one, paired with the gruit, jumped off the printed menu to me long before we walked through the door. Here was a dish that might have been the star of the evening when it came to the beer pairing. The tender stewed rabbit (with nary a toothpick bone to be found...kudos!) was the perfect companion for the herbed, starchy pasta and the herbified beer (remember: gruit=no hops). The mild gaminess and saltiness of the prepared rabbit (not a bad thing) seemed to play well with the hop-free herb-forward gruit beer. This jumped to the forefront of the night thusfar, nudging aside, just barely, the first course. 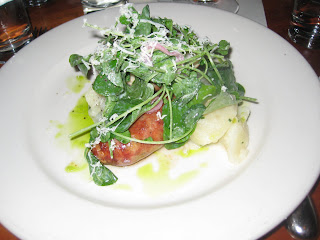 ~Boccalone sausage, smoked escolar, potatoes, & horseradish crème fraîche served with Magnolia Big Cyprus Brown Ale
4th course. Was it the winner? It certainly got close. The sausage convinced me that the Ferry Building will absolutely be on my itinerary during my next Bay Area visit. I'm not sure if the smoked fish brought out the ever-so-slight smoked flavor in the brown ale or if it was the other way around...or whether it was the sausage doing the trick (my personal highlight of the dish). Either way, this dish worked well and the pairing was probably the third best of the evening, in my opinion, behind the first course. 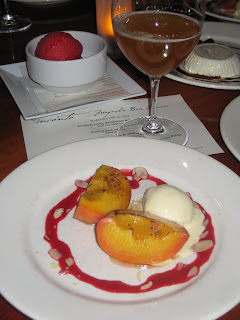 ~Roasted peaches, berry essence, almonds, & hop ice cream served with Magnolia Cabernet barrel-aged Tweezer Tripel
I've been known to say many times that there may be no better pairing than a chocolate dessert with a nice big beer (big in flavor and body, that is...not volume). So, if we're gonna do a non-chocolate based dessert as the last course of a beer dinner, it better be out of this world good. We were given two halves of a roasted peach with a hop-flavored ice cream and also some extra goodies to share across the table. One extra was a refreshing gelato (or a sorbet, I don't recall) and the other was what I believe was a panna cotta.

Each was good and interesting in their own respective right. But, the original pairing of the peaches with the barrel-aged Tweezer Tripel just didn't go far enough to astound me. The tripel seemed to be lacking some of the weight and the barrel and fruit flavors that I was expecting. And the ice cream had a bit too much of a, how shall I say?, dirty hop flavor that distracted me from the peaches and ice cream. It was fine, but my palate just couldn't get around on the ice cream.

Mark Pastore, owner of Incanto, stopped by to speak with us for a few minutes. I don't know if it was because he knew anyone at our table, since I didn't notice any other type of socializing from the kitchen, or Dave McLean, or Mark otherwise. There may have been some one-off visits, but the hosts of the evening generally stayed at the far end of the bar and allowed guests to go and speak with them. 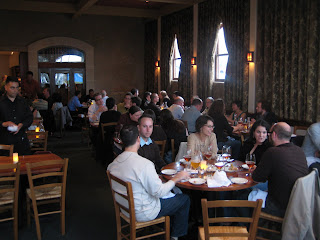 Most of the well-received beer dinners that I've been to are ones where there is some level of interaction between the kitchen, bar, brewery staff, and the customers. But, at this one, there was no announcement(s), thanks for coming out to dinner, or introductions of the courses and the pairing intentions. That certainly could have gone a little ways to bridging the long waits between courses.

So, what do we learn from this seemingly rambling, never-ending story of eating and drinking in San Francisco's Noe Valley? (hey, give me a break...it was, afterall, 3 and 1/2 hours...there's a lot to tell) Let's recap: a new neighborhood, for me, discovered; dinner at a table of great friendship; beers by one of SF's best; dinner by one of the country's more adventurous and cutting-edge chefs; one of the more unique beer dinner experiences in my log book. A winner on all counts. 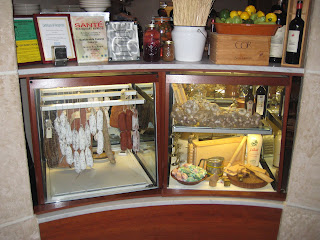 One closing note about Incanto. They have a sister establishment, Boccalone, though nothing like Incanto, this one set up on the opposite end of town in the Ferry Building Marketplace along the Embarcadero, not far from the Coit Tower. Three little words were mentioned to me, which will go into my itinerary for later this year: Black Truffle Mortadella.

And, if you'd like to read another perspective and see way better pictures of this dinner, please visit Jesse Friedman's Beer and Nosh website; you may never return.

Thanks for the link love - it was a pleasure to share our table with you and enjoy our epic, 72 hour marathon beer dinner together.