Back to Part 5 in a Series of 6
That, in a nutshell, was San Francisco during the last week of June 2009. I missed NHC, but gained some new knowledge of the city while partaking in some of the mainstay treats that I've come to appreciate over the years.

Next visit, I'd like to stop in at La Trappe, then get out of the city for another northward bound visit from Marin to North Coast and many places in between. Sierra Nevada isn't far from my radar either.

So, let's see...what does that leave for me to share with you...um, yeah, oh right, the country's best airport beer bar. Now, of course, I haven't been to them all. A good number of the largest ones and a few smaller ones as well. I hear Portland, OR has some good beer at the airport. I know that Madison, WI, for its size, has some very good representation. 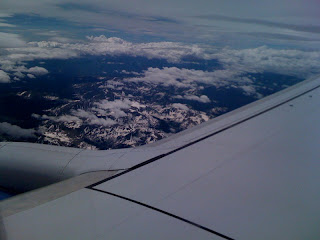 I was keeping my fingers crossed that when I landed for my connection in Denver from SFO to PHL that I would be in the C-terminal area and have enough time to pop in for a sandwich and a beer or two.

Good fortune smiled upon me and within 10 minutes of landing, I was off to find myself some lunch. Allow me to show you the tap and bottle list at "Timberline Steakhouse" in the Denver, CO airport. It's in the main shopping area of Concourse C and I first visited it after GABF 2008.

It's just a short walk from the gates (moving sidewalks sure help) and once inside it becomes very easy to become distracted to the point of missing the gate closure. Between the decent food menu, the runway views, and the local beers I'm not sure it gets much better than this. What do you think? Do you have a favorite airport beer bar? How does this rank?