Back to Part 4 in a Series of 6
Next to Part 6 in a Series of 6
Now that we were less than 24 hours from getting out of Dodge, it was time to put a finale on this trip to San Francisco. My traveling cohort, Dennis, and I headed east to Lafayette for our last dinner. He had never been to Bo's, a BBQ joint that many of you know me for going on and on about after each trip to the Bay Area. We met up for an early dinner with my sister-in-law's family. 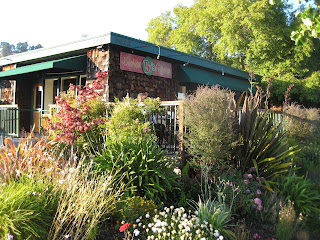 In addition to a mostly glowing review, finally, though, the time has come for me to get in a dig in on Bo's. The prices. No, not the food prices...the beer prices. Though, some also jump on the food prices as well, claiming the meat not worth the moolah. I'd disagree. While it isn't fast food BBQ prices, it's not what I'd call expensive...particularly given the affluent suburbs in which it's located. Generally speaking, the entrees are priced in the mid teens and include a serving size of meat(s) appropriate for most average, or beyond, appetites plus a couple of small sides. 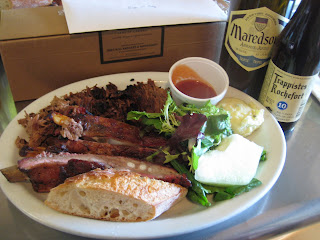 So, while the food was its typical meaty delish-ish-nish, it's time something be said about the beer prices. I keep a spreadsheet (ha, go figure, right?!) of all retail beer that I purchase, including date, size, brand, location, and cost. It's an interesting study over the years to see the beers that I purchase consistently and the prices that are charged for them.

Unfortunately, I don't keep track of prices at restaurants or bars...just to-go beer. And, I definitely don't have concrete evidence of what I've paid in the past at Bo's for the good, bottled beer that they carry. At one visit, there was even a few Westvleteren's in the cooler...tsk tsk!

But something in my gut (or my memory banks, which are typically pretty good) tells me that beer prices have taken a jump. I recall this feeling back in February earlier this year, but no where near as shocking as this past visit. Picture this: I walk up to the counter to place my food order with two large bottles in hand. One is a Piraat and the other is a Maredsous Tripel. I don't recall which beer the counter lady said cost which price, but hold on to your seat as I tell you what the two prices were. She proceeds to ask me, "Do you know that one costs $24.50 and the other costs $20.75?" Say whhhhaaaaa?! is something along the lines of what my expression said. I may be off by a quarter or two, but the point is both 750ml bottles each cost more than $20.

Yes, I agree that these are pretty decent beers in large bottles, but again....say whhhaaaaa?! Even the Ballast Point Pale Ale was somewhere around $12.50 for a large bottle. Again...really?! This one's even stayed in its home state. Sigh... So, who's wrong here? The proprietor or I? Is my "price programming" stuck back 5 or 10 years ago?

I begrudgingly put one back (the Piraat) and in its stead picked up a Rochefort 10. I mean, c'mon, Rochefort 10 with BBQ? It might not get any better than this, regardless the price. Well, it still clocked in (the 330ml bottle, that is) at $10.50, which practically seemed like a bargain for one of the best beers in the world...especially when compared to the first two that I picked up...and you know I don't say that too often. Once again, I may be off by a few quarters, but I believe that was the ballpark price. Ha, ballpark prices! These beers might actually be cheaper at the ballpark, wink wink nudge nudge. 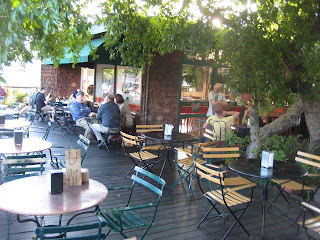 Too bad the BYOB concept isn't a part of the Californian lifestyle the way it is in Pennsylvania. What this all meant, fortunately or unfortunately depending upon your perspective, is that the four adults shared smaller quantities of beer than we might originally have expected. Nonetheless, the real winner here was as predicted: the Rochefort 10 with ribs, brisket, and fixins. Absolutely stellar.

We grabbed a little ice cream from a new shop down the street, said our goodbyes for this short visit, and then hopped the train back downtown. I made one more last call before throwing in the towel on this trip, this one at The Monk's Kettle in the Mission District. Another first for me. 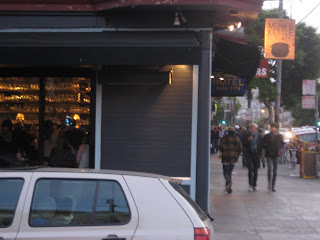 The Bay Area has three prominent Belgian bars. Funny how just a couple of years ago, there were none. Now, with one across the bay in Oakland (The Trappist) and one in North Beach neighborhood (La Trappe), Monk's Kettle rounds out three spots around town where you can find some right good Belgian beer. Remaining now on my list from these three is La Trappe, whose building I'm told has a nice beer cave in which to drink. Next time, I suppose. Afterall, it's only but a few blocks from Rogue. 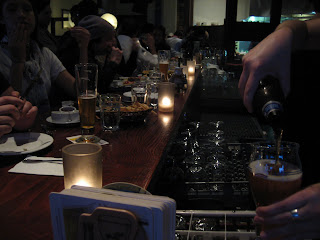 But back to the Mission and Monk's Kettle. It's a cozy establishment that, with its close quarters, promotes a friendly vibe. The bar in some ways reminds me of Bridgid's in Philly a bit. It's not a complete horseshoe, but it does have a bit of a wrap around that allows bar customers see each other and also be within easy earshot of the bartender. And friendliness, like at Bridgid's, abounds. 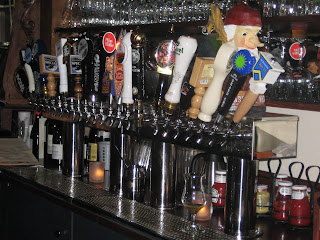 After being stuffed with BBQ within the last couple of hours, I was in no mood for food. From what I'm told and what I saw next to me at the bar, the kitchen cranks out some nice food (from a nicely smart and tight menu that promotes the whole local and sustainable thing wherever possible) to pair with the extensive beer list. For starters, the blue cheese platter and its accompaniments looked very enticing and will probably be the first thing I order the next time I set foot in the Mission. 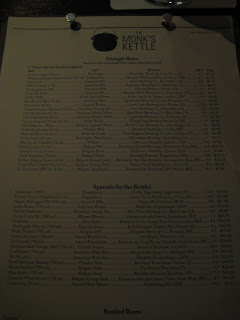 The beer? Yes, there's a healthy serving of high quality Belgian and Belgian-styled beers available. But, the locals are well represented as well. From Speakeasy to Russian River to Lagunitas to Moonlight to North Coast, they've got the Bay Area covered and the rest of the state as well. It was a brief visit, but a high quality one that puts it high on my recommendation list for others visiting San Francisco. That took me to the almost-official end to this 5-nighter to San Francisco. I'll be back tomorrow to wrap things up AND to finally share with you what I may have found to be the country's best airport beer bar. Hint: it's not in Philly (for sure) nor in San Francisco.