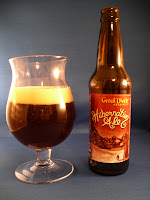 From where & how stored: Received in trade with Eli at foureyedbeergeek.com

The Aroma:
- sweet malty nose like a specialty bread

The Taste:
- this one is complex
- malt at first, but, not too much before the array of hops flavors take over
- almost grassy
- bitter finish like a German Alt

The Verdict: From Sweet nose to less sweet taste up front giving way to more malt in the middle. The finish is definitely a slightly bitter tang. There was a different hops profile with each taste. You'll want to buy two, just so you can ponder this truly special winter brew. As a homebrewer I would like to try something like this.

Glad you guys liked it, I think its damn tasty as well.

As far as sending out more, you guys know the story as to how I came across the older vintage.

I'll have to stop off and see if the sixpack shop still has any sitting around in the cooler.