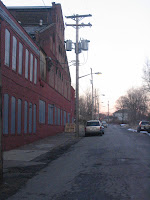 This story is long overdue, but, too important to pass up.

It was a beautiful day if not a tad cold in "dahn-tahn" Pittsburgh, PA. I just got some great news and I was ready to go back to Southeastern, PA. Of course I couldn't pass up the opportunity to see what East End Brewing had to offer. Especially since it was Thursday and Scott opens up for growler hours from 5:00-7:00.

Now I used to live in Pittsburgh, but, it has been a long time and had no idea where this place was located. Google maps helped me out a bit and before I knew it I was looking at a very unassuming facade. Some might think, "this is it?". I was thinking, "This is IT!". Hey, I like informal places ;-) Two cars out front and uh...where's the front door? 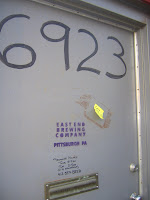 Oh there it is. The one with the sticky note that says "Come on in!". Now that is informal. In a way I felt like I was at a dance club in Pittsburgh's Strip District or perhaps in Buffalo, NY. Basically it seemed like an old building that was re-purposed into industrial park like spaces. Not too different from Tom Baker's old place in Ocean, NJ.

Inside there's a long dark hallway leading back to the brewery. If you look at the picture on the front page of his website you'll see basically the same tanks, taps and well Scott Smith himself. I kinda milled around while he was talking to somebody and introduced myself as that guy from The Brew Lounge that emailed him and he asked what I might like to taste. There were five options that night. Fortunately I wrote them down.
All of them were very tasty. The Fat Gary is a solid session beer. The Witte needed a little more time to mellow out and lose a bit of the nose, but, it tasted great. The Big Hop was obviously for those of you our there who enjoy a ridiculous amount of hops. Don't miss it. I don't remember it being noticeably out of balance, but, I don't usually care about that anyway. Black Strap Stout is well just plain delicious. Reminded me somewhat of Perkuno's Hammer from Heavyweight. American Wheat #7 was delicious, if not a bit cold, but, hey its winter and the keg was on the concrete floor. Nice hit of hops with enough malt to keep it grounded. 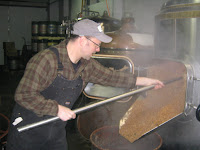 Scott is definitely enthusiastic. I guess you have to be when you run a brewing business by yourself in a freezing cold warehouse atmosphere with concrete floors and icicles hanging from your nose...ok..ok, it wasn't that bad. Scott, does have some volunteers. The place is definitely charming in that manly kind of work your butt off way...heheh. Ever since Bryan brought East End to my attention and I checked out his site, I have been interested in meeting the one man machine behind the scenes.

My time was running short. I had over three hours to drive and as much as I wanted to stay, really need to get on the turnpike. So I asked Scott to pack up two bottles of The Ugly American and two of the 2006 Gratitude. One each for Bryan and I. I also took a growler of Fat Gary's Brown Ale. (after quick trip to a ATM I was all set)

What a truly great guy who brews very good beer. Pittsburgh is lucky to have a brewer like Scott. I hope to be back soon. In the meantime I'll have to find somebody to share those two big bombers with. Did I mention that all this beer is brewed in an environmentally sustainable way.

Thanks Scott. BTW, next time I'm coming in the summer!
Written by Adam at Tuesday, March 27, 2007

We're definitely lucky to have Scott brewing in western PA.

Nice writeup. Scott's enthusiasm and constant website updating is a welcome addition in this sometimes stale area. Doesn't hurt that his brews are top notch either.

And his barkeep is a hoot and a half.

Hats off for Pittsburgh!

Happy to hear others agree. I couldn't see how you wouldn't, but, it is nice to know I'm not crazy!