Click Here for notes from the Michael Jackson Tutored Tasting portion of the event. 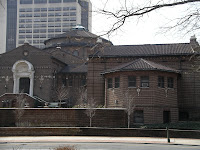 Extreme Beers was the theme. And, in terms of extreme, hops appeared to rule the day as most brewers brought at least one highly hopped beer. Over 130 different beers represented over 50 breweries. 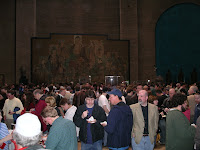 Extreme ambiance was the order of the day as well. Well, maybe not extreme, but certainly pleasing and comfortable under the large rotunda. The museum at Penn sure is a fitting venue for this age-old beverage that we all enjoy. And, perhaps even more fitting for the Midas Touch that Dogfish Head rolled out! There must have been something, too, about the circular setup of the brewers around the rotunda, because although the attendees filled the area, there was rarely a wait of more than one or two people to get even the most sought-after beers and the traffic continued to flow nicely around the rotunda throughout the session. 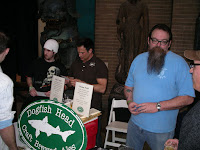 I circled 30 different ones on the list that I was interested in trying. My intention typically is to only try beers that I've never tried before. My discipline ran out when I got to the Stewart's table. When faced with a great beer like the bourbon barleywine from these unfairly underecognized folks in Bear, Delaware, well let's just say I did what I had to do. 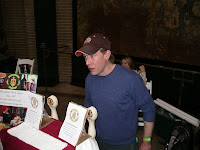 In the end, I knocked off 15 of the original 30 that I circled, and then fell into 7 others. How can I complain? All in all, the positive beer karma flowed thick and fast on this festival day. (I hope that for the later sessions, they enjoyed the same reaction.) The people were great...from Bruce Nichols the event planner and director, to the brewers, to the MCs (Michael and Sam), to the volunteers, staff, attendees, and beer cognoscenti. I had so many great interactions with folks from each of these groups and left feeling very upbeat that with these kind of events, Philly Beer Week 2008 will be a great showcase to tell the world what a great beer region this is (if they didn't already know). 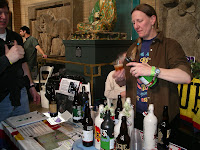 So, for the beers...There was not a single dog in the bunch. But, for the sake of declaring some winners from the day, here are the top 5 beers that I'd never had before these tastings. As you might be able to tell, Rogue ruled the day for me as the best lineup of represented beers. They had 4 interesting harder-to-find of their beers, the JLS YSB was the fourth (I've had it on draft and skipped it on this day). 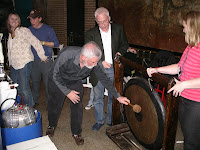 And, then who was on hand to bring the festivities to an end? Well, it was none other then the esteemed (I was going to say venerable, and mean it with all due respect, but I thought given the archaeology museum that the term may be taken out of context ;-) Jack Curtin.

Click Here for notes from the Michael Jackson Tutored Tasting portion of the event.
Written by Bryan Kolesar at Tuesday, March 13, 2007