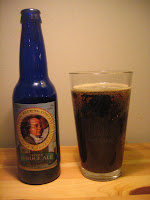 From where & how stored: Purchased cold from Ron's Original Bar & Grille. In my fridge ever since.

The Aroma:
- slight hoppiness to the aroma
- slight maltiness also
- suppose that makes the aroma slight, and not memorable

The Taste:
- the spruce comes through in just a subtle way
- a bit of sweetness as well, molasses perhaps?
- medium weight to the mouthfeel

The Taste:
- the taste follows with that same lightly sweetness
- that gives way to a tinge of something that must be the spruce
- clean brown ale with a little zip, but, oh so subtle

The Verdict: I need help understanding this. I've tried it a few times. I like it. It isn't hugely spruce. It is a clean brown ale with a little extra something. It's a keeper. ;-) Makes me wonder what the original tasted like. Hmmmm...I guess Ben Franklin took that to his grave. I'm happy he left his recipe behind.

Pours a dark, brownish mohogany w/ a full, semi creamy, spattered froth slowly receding to a dusty blanket and thin yet contiguous lacing. Aroma is remeniscent of spiced menthol w/ a slight hint of sweet cinnimon biscuits. Medium nectar w/ ample residual effers. It’s a dry, fruity brew w/ a moderate malt componant. There is a defined herbal/menthol character w/ a finely bittered finish. An interesting brew that gains momentum as it warms up. The flavors really start to jell becoming more lucious and complex. Flavors of wintergreen, nutmeg, cinnimon, tobacco, herbs, leather, and bitter wood. OVERALL: I’m always happy to sample brews from the Colonial period. They are very intersing to say the least. I do know they had some good tasting brews back then. I personally would not buy this brew for everyday drinking but it is a complex specimen and worthy of it’s rating. Let this one warm up a bit.