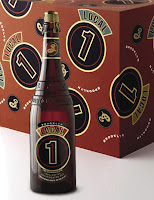 If you haven't been fortunate enough to try this new beer from Brooklyn Brewery, your time is coming. Local 1 is being released this week to the retail market in 750ml bottles first in New York and New England, then to the broader markets.

I've had the great pleasure of having this twice in the past month and it is, in my opinion, going to be a hit with the beer community. Hearing it described with terms like bottle-conditioned, tripel, saison, and "Methode Brooklynnaise" should peak your curiosity, no?

The Brooklyn Brewery is proud to introduce Brooklyn Local 1, our first 100% bottle conditioned Belgian-inspired ale in a 750ml bottle. Brewmaster Garrett Oliver likens this beer to a Belgian tripel or a strong saison, but he says it really is a Brooklyn original, produced using the artisanal "Methode Brooklynnaise". Brooklyn Local 1 launches in New York, New Jersey and Connecticut this month, then moves to other Eastern states as supplies increase.

Come join us Friday, March 9th, 2007 during Happy Hour (6pm-11pm) as we introduce Brooklyn Local 1. For those of you who know, we sell tokens that are exchanged for beer. For the launch of Brooklyn Local 1, you are able to exchange three tokens for one pouring of Brooklyn Local 1 plus a souvenir 16 oz. gold rimmed glass that can be refilled for 2 tokens each refill. All other beers will be one token each in our regular plastic cups, as usual.