Spending my last vacation day of 2006 in NYC was so enjoyable that I thought I'd try the concept again this year. When faced with what to do with that one last vacation day (at my company, we don't carry unused vacation days from one year to the next), why wouldn't I spend it on something beery and cheery? Unlike last year, this year I had a co-conspirator...Dennis the Lancaster County Correspondent and his brother-in-law Steve. We'd thought of heading to Yuengling first for their morning tour, but were afraid of looking like Bryson copycats. Instead of heading north, this year I headed west to meet the guys at Canal Street in Reading. The main goal here was to start the day with lunch and a few Legacy beers. It wasn't long before we thought things had gone terribly wrong. Apparently, the only thing that had gone wrong was something in the relationship between the restaurant and their downstairs neighbors. Don't get me wrong; the food, beer, and service were just fine at the bar. Actually, very good. But, we just couldn't figure why the only Legacy beer being poured (draft or bottle) was the Reading Pils. Though, this was a nice starter, all the same. 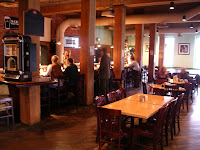 The bartender went into great detail about how proud they were of the beer list and how they've replaced the Legacy tap handles over the past year. As if to suggest that they just didn't fit the model of building the most impressive list of biggest, baddest, novelty beers that they were trying to achieve. Of course, the beers on the list were nothing to sneeze at. All the biggest and "most interesting" beers from places like Anderson Valley, Avery, Bells, Dogfish Head, Great Lakes, Green Flash, Heavy Seas/Clipper City, Ithaca, Chouffe, Lagunitas, Moylans, Ommegang, Rogue, Sierra Nevada, Sly Fox, Southern Tier, Stone, Stoudt's, Victory, and Weyerbacher. The bartender was sure to go out of his way to point out how big the beers were, either for their hops or their alcohol. But, it's not like they were avoiding all local breweries. Still it was disappointing that when one of the greatest things about craft beer is drinking it fresh, Canal Street has gone out of their way to ensure that it won't happen at their pub. 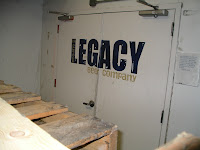 Okay, I'll stop now; you get the point. We did what any rational person would do next. That is, pay the bill and head downstairs where three glasses were waiting for us and fresh Hedonism, Midnight Wit, and Nor'easter. A quick pull from the taps over in the corner and we were sittin' pretty with what we came for. 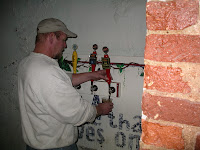 We chatted for around 20 minutes or so, enough to pass the beers around and sample them all. Funny how for the three of us, we each had a favorite of our own. We talked about Legacy's plans in the somewhat near future to start on a riverfront 2nd street project. Initial plans would be for a brewery with minimal front-of-the-house operations (a la Tröegs, perhaps?) and then hopefully moving to a brewpub type of establishment. What a score for Berks County (and Reading) this would be. Net score for our first stop: 9...that would be a minus 1 for Canal Street and a 10 for Legacy and Dave. Moving on... 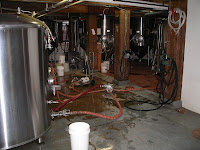 We made our way southwest out of Reading into Lancaster County. Back in Reading, we would have liked to check out the Speckled Hen or Northeast Tap Room, but both apparently don't open until dinnertime. NETR couldn't be confirmed since their phone had been disconnected, changed, or whatever. In hindsight, we learned that the Ugly Oyster may not have been a bad stop either. But, we were now a bit short on time, since our ultimate goal was Lititz, PA and the General Sutter Inn's cask ale tasting event. 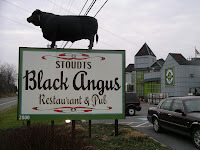 After, a 15-20 minute drive out of Reading, we wound up at Stoudt's in Adamstown, PA. What a difference the newly constructed route 222 bypass makes. Growing up in that area, I recall how long it would take along that route by following business route 222 through Shillington and other such small towns. Bet we must have saved close to 10 minutes of stop 'n' go traffic. 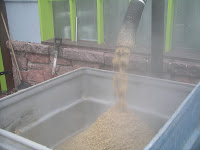 We were hoping to have time for at least 2 beers at Stoudt's and the opportunity to sit and shoot the breeze with Carol, Ed, Eddie, John, or whomever would return the favor. But, once again, with our eyes set squarely on Lititz, I looked through Ed's renowned bread shop (no luck, all sold out by this time of day....3pm), chatted with Carol (who was so overwhelmingly happy as she doted on grandchild #5), and put back an Old Abominable Barleywine (spot on, hoo-ra!).

It was just our luck that as the brew crew was wrapping up for the day, we needed to head out. Though, this is been a trend for the last few times that I've been there...always somewhere else to be. This will have to change soon, with at least a couple of solid hours spent at Stoudt's. Mmmmm, takes me back to a perfect trip that I had a few years with good friends Mark & Susan just before they moved out of state. It included many hours at Stoudt's, an overnighter at the next door Black Forest Inn, and oh well...that's another story for another day.

After consolidating cars at Dennis's house in Reamstown, we were off on a 20-30 minute drive to the General Sutter for some fabulous cask conditioned (aka real) ale from Yards Brewing. Oops, I ruined the surprise.

Click here for the second part of the story