Quick Review of The Belgian Cafe in Philadelphia, PA 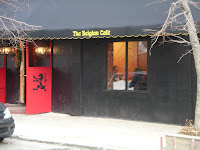 I want to like Monk's sister cafe, The Belgian Cafe, across town. I really do. Why? Maybe to invalidate Craig Laban's recent review, finding it hard to believe that the Monk's duo could be stumbling in their Art Museum neighborhood foray. Maybe because I previously lived just two blocks away and would like to think the former Tavern on Green would be turned into something where I could envision myself a permanent fixture if I still resided in the area. Maybe it's because given Philadelphia's and Tom Peters' preeminent position in this country's Belgian beer scene, success for the new establishment should be a fait accompli?

Let's see, how did this all work out? Well, we stopped in late on Saturday afternoon after the Flyers overtime loss to the Bruins in a modern-day display of almost Old Time Hockey. Perhaps it wasn't the most fair time of day to stop in for a review. We sat at the bar and stayed for some beers and a dinner. This took around 90 minutes, or so.

To the first point above, Laban's criticism was mostly pointed at the vegan side of the menu. For starters, I should say that this would not be my natural inclination. Not that I have a problem eating soy, plant, or other non-animal products; it just is not usually my first choice. Vegetarian meatloaf (an oxymoron if I ever heard one) just doesn't jump off the page at me. Saying that, we opted for mussels and a salad to start with, then the beef stew for me and the ham & cheese sandwich (more interesting than it sounds) for Patty.

The mussels were decent. Around average size, I'd say, for this time of year. Plump and firm enough and they carried some of the flavor from the Herbes de Provence and Piraat that they were lounging in. Some of the rosemary sprigs could have been chopped a bit finer, since using them as toothpicks was not my preference. Providing a nice texture to the dish was the addition of chunked sausage.

The beef stew that I had was a decent sized plate full of chunked beef (mmm, more chunked meat! told you we didn't go for the vegan options) surrounded by vegetables and topped with a generous dollop of mashed potatoes. The beef was just a couple of minutes away from being cooked too long for my preference, but overall, this was a satisfying and tasty bowl of stew for what would be a chilly evening.

And, the ham and cheese sandwich that Patty ordered? It came out with each of the toasted sides of the sandwich open-faced, both layered with both ham and cheese, which was perfect for her to spread a knife of dijon mustard across. It was a really tasty, yet simple, sandwich. We would have liked to have had a bit more flavor, though, in the unremarkable slaw served as the sandwich's side. 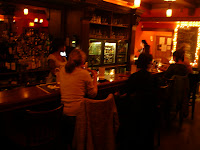 The beer? Oh, you want to hear more about the beer, eh? They've got a dozen taps pouring beers and on this particular day they ranged from Chimay to Rogue to St. Bernardus to Brooklyn to local faves Tröegs and Sly Fox. And, while it's only a subset of what's available at bigger brother Monk's across town, the bottle selection lists most of the requisite beers from around the world focusing, of course, primarily on Belgium and the United States. Our selections were drafts from Rogue Hop Heaven, St. Bernardus 12, Chimay Cinq Cents, Brooklyn Black Chocolate Stout, La Chouffe, and a bottle of Maredsous 8. All were poured and presented properly in fitting glassware.

The service was fine too. It was sufficiently friendly, but certainly not aggressively in our face and not always on top of our needs. We were there, as I'd mentioned, in the late afternoon nearing shift change. Things might have been a bit more disorganized than they would be, say, three hours later. Plus, we sat at the bar and did not get the full dining room experience.

Overall, The Belgian Cafe measured up just fine. Let's go back to my checklist in the opening above.

A) Our food experience seems to have been better than Laban's;
B) Based on the trendy edge, or shall I say edgy trend (I couldn't quite put my finger on whether they're going for a particular vibe), that they seem to be exhibiting, I'm thinking that Bridgid's would be a more likely every-other-day hang out for me, if I still lived in the neighborhood; and
C) Tom & Fergie have done well opening this new location, but will be interesting to see the long-term viability of it in the Art Museum neighborhood. The changing demographic of the area will help to determine.

It certainly deserves a full review after another visit and a chance to test out more of the menu and service.
Written by Bryan Kolesar at Tuesday, January 15, 2008

I love the food at the Belgian Cafe (I'm vegan) - its the tap list that does not excite me so much. I mean, its good - but no better than a dozen other bars in Philly, and nowhere near as exciting as Monk's or Eulogy IMHO.

Maybe I'm just spoiled by the greatness that is the Philadelphia bar scene? :)

Thanks for the review... I had actually planned to take my girlfriend there for NYE as Monk's was sold out, but then I read Laban's review and decided to give it a pass. I don't live by his word-as you said, I found it hard to imagine a "copy" of Monk's could be possibly be so bad-but ultimately, it was the fact that this would've been their first NYE service, and nothing spells potential disaster like a set 6 courses that aren't normally on the menu...
Also, his line about the strong beers not exactly dulling the pain so to speak are worrying words indeed!
Anyways, it sounds fine for a casual bite and some good beer..

I took my wife here at the recommendation of this site. She's a vegetarian but I'm the type that eats meat at almost every meal. I tried the vegan buffalo wings and was very impressed. I would definately go here again.

That sounds like a good recommendation. As a non-vegan myself, I'm not always sure what is good to try and what constitutes good..thanks Thirsty