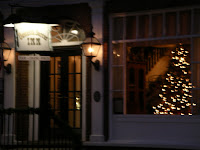 Click back here for the beginning of this story.
The General Sutter Inn is a, may I use the word lovely?, charming inn supplying food, drink, and lodging...pet-friendly lodging too. I plan to return sometime soon and learn more about the history of the Inn and explore more of the nooks and crannies. You'll get a full report on the General Sutter when I do. The town of Lititz is equally charming and would provide a nice little overnight getaway. Oops, let's get back to topic. 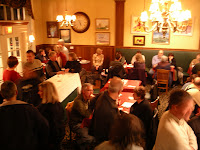 In the front door and down the steps to the left found us greeted by a laid back room full of happy real ale imbibers. Paul Pendyck, the cordial host, was in the corner gravity pouring the cask conditioned Yards ESA and Yards Love Stout. He was pouring both short glasses and full pints. And, trying not to sound like a giddy schoolgirl, they were perfect. As time passed, I found myself chatting with some homebrewing folks (Karen & Frank, or MugHugger & HomebreWing if you'd like) from the Lancaster County Brewers (LCB...not to be confused with that other LCB), who are hosted by the Lancaster Brewing Company in.....Lancaster. 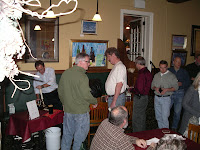 So, after 90 minutes or so of cask delights and pleasant company, we headed back east again. I dropped off my wingmen, had some pizza, and pointed myself further east to Chester County. Unfortunately, the rainfall was picking up at this point and made the trip home a bit more challenging. So, I did what anyone would do and made a pitstop at Ron's Schoolhouse Grille in Exton, PA to peruse the selection and let the rain pass :) 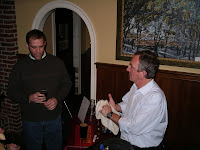 Paul Pendyck (r) with Bryan Kolesar
I cannot understate the job that Paul and the General Sutter folks are doing to bring great beer experiences to the heart of Lancaster County PA. For folks in the Philadelphia area, this may be a bit of a hike for you. But, I strongly suggest you at least make a trip out to the General Sutter for one of their cask events, scheduled the last Friday of every month. You shouldn't be disappointed. They also have their first full-fledged beer dinner coming up in February, a 5-course Victory Beer Dinner.

Believe it or not, that wasn't the grand finale of 2007 for me. Just when I thought the year would end on a high note for me on that wonderful Friday evening, little did I know that 60 minutes at The Drafting Room on New Year's Eve would put the exclamation point on it all for me. It was a well-deserved farewell for Patrick Mullin, who as you all know by now has moved on to become regional sales representative for Sierra Nevada.

While the conviviality was busting the joint apart, I came across the final entry in my year's most appealing new beers to me. What do I speak of? Did you catch the TDR taplist that I posted last week? I mentioned liquid chocolate. Oh yes, the liquid chocolate called Chocklat from Southern Tier in New York. Yowzah! You've got to experience it to understand it. It's chocolate first and a beer second, unlike many chocolate beers like Chocolate Stouts which typically are beer first chocolate second.

Let's see. In the last few days of the year...a solid establishment find (General Sutter), an awesome day trip through Berks & Lancaster Counties, a wowza beer (Choklat), a sendoff for a friend (Patrick from The Drafting Room), and we didn't even talk about the stroke of twelve midnight on New Year's Eve. 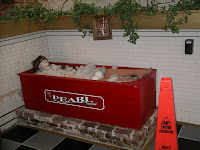 Looks like a great trip. We've only done the local Maryland, Harrisburg, York, and Adams County breweries and pubs. We're fairly new to the microbrews..about 5 years now. We're hosting a German Beer Tour which ends in Munich for Oktoberfest 2008. Can't wait. Spent a few years in Germany and am excited to get back. Would like to also put together some U.S. Tours in the future.