The Thunder Finally Rolls at The Drafting Room : 1/5/08 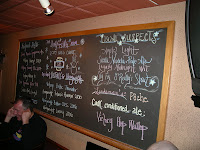 The Tale of Two Beers. Maybe that's what this past Saturday should have been called at The Drafting Room in Exton, PA. There was the Perkuno's Hammer that some were tasting for the first time and describing as having a pleasant fruit tartness to it. Huh?! Then, there was the originally intended Perkuno's Hammer that many have tasted before which was not available on Saturday. It was, fortunately, available with my dinner at home the prior night from a 12-ounce bottle. It had kept perfectly well and was only slightly diminished in overall flavor and fullness. Luckily for me, I've still got another 5 bottles from that same case.

But it was the Baltic Thunder from Victory Brewing that lured most people to TDR on Saturday. Victory's rebirth (or perhaps better stated...recrafting) of the Perkuno's Hammer from the now-defunct Heavyweight Brewing (formerly of Ocean Township, NJ) was delayed for months for reasons ranging from legal to packaging problems. Patrick Mullin, über Suburban Beer Guy that he is, had been given the courtesy of hosting the event at TDR.

Now, in the final twist to this new beer's quirky legacy, Patrick had his last day of work at TDR on December 31st. But, that didn't stop him from dropping in for a couple of hours before heading off to his new employer's, Sierra Nevada, company meeting. With tap handles in tow, it almost looked as if he'd never left, helping with some of the setup. But, before long he had beer glass securely in hand and looked just like the rest of us. Even laughing with Jack Curtin, what a sight! 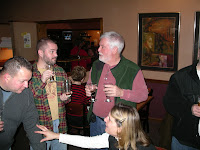 Unfortunately, anyone heading to TDR looking for a Baltic Thunder vs. Perkuno's Hammer showdown left disappointed. Unfortunately, the Hammer's kegged beer had turned and only left a sharp, sour taste which I'd mentioned above that some people actually enjoyed. I suppose my expectation for what the beer should taste like (rather, did taste like a year or two ago) was skewing my preference. Across the room, several pints were returned while others grinned and beared it. The same could be said for the Baltus O.V.S. whose time had also passed. Though, in my opinion, if one beer was more suited to the sourness, it was the Baltus.

The Heavyweight beer for whom the light was still shining was the Lunacy. And, oh how happy I was, for this was the first Heavyweight beer to show me Tom Baker's brewing magic back in the early 00's. 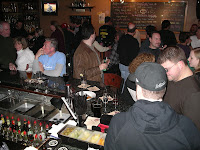 Uh, back to the Thunder. I seem to be jumping around quite a bit here, eh? Well, to me the Thunder was just nicely done. It wasn't a big wow beer, but then, my hopes weren't set that high. Considering the time in the tank, the blending that they had done, and the promise that this would not be Perkuno's Hammer #2, I was figuring it would be a quaffable, yet flavorful and interesting, beer. Just not an overly complex or boo-ya beer. Of course, this could change with the next batch, and I do expect it to be a tad bigger and livelier. But, some around the room could be heard poo-pooing the current version. C'mon now, does everything have to have the impact of wasabi paste? Does sushi really have to be drowned in soy and wasabi to make it enjoyable? (Actually, that sorta reminds me of a Pete Brown article from a few days ago.)

So, what else....what else? How about the Scaldis Noel and the Bear Republic Racer 5? In a draft list that included all of the Victory and Heavyweight treats, and more delights in the bottle (Jackeldricka, Biere de Garde, Black Ocean, and Slice of Bread), I guess it wasn't so difficult to overlook the Scaldis and the Racer 5. Normally, either could easily be the first choice off a draft list. (Oh wait, when we arrived and the specials weren't flowing yet, I did have a Racer 5 and it was just right!) So when a glass of Scaldis was presented to me in my last minutes before leaving, it was a fitting and wonderful conclusion to the day. 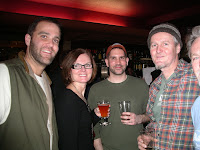 Tom and Peggy arrived not long before I was heading out so I only had a few brief words with them. And, a picture snapped by everyone's buddy Richard. I guess this calls for a visit to West Mount Airy in the coming weeks to see how things are going at Tom's newest project, Earth Bread & Brewery. How nice it would be to see the construction come along quickly enough to be serving some beer during Philly Beer Week. Seems optimistic, but let's keep our fingers crossed...
Written by Bryan Kolesar at Wednesday, January 09, 2008