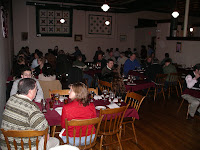 Congratulations to Tom, Amy, and David Rupp at Union Barrel Works in Reamstown, PA. Thanks to The Brew Lounge, they successfully hosted their first sellout. Okay, partial thanks to The Brew Lounge. Okay, I shouldn't kid myself, they can only thank TBL for getting me there. Even my table mates would have gone with out me. Humbling, for sure :)

But, on a much more serious note (because if beer's gonna be the "new wine", it's gotta be serious, right?! How am I doing at being smarmy?), UBW's third official beer dinner was another well-crafted combination of Tom's recipes from the brewhouse and son David's seafood creations in the kitchen. The first back in October may be best described as an all-American feast. Before taking a month's break to focus on the holidays, November's dinner focused on wild game.

Truth be told, the menu this time around intrigued me the most. Seafood and beer, how would it be done? Would it be done well, or would it leave us reaching for the nearest glass of Sauvignon Blanc, Pinot Grigio, or Chardonnay? The consensus around the room seemed to be agree that the sea-food received an A.

Speaking of around the room, as I mentioned earlier this was a full house. The dining room was filled with a rough count of at least 60 diners, including a certain someone, who if he doesn't start working soon (tomorrow, I believe?), I'm going to put in a vote that we give him the name "Wanderin' Patrick". This guy's been on a tear during his little working hiatus. Come to think of it, though, this could boomerang and raise questions about my own itinerary.

If I may head straight into my rankings, my favorite dish of the evening was the stuffed lobster tail. We all wished, natch, that it was a WHOLE lobster but then the dinner price might have been more like $80 instead of $40. But, with the chunked lobster meat interspersed with the spinach and crab, it was quite the delicacy. The scallops ran a close second where the meaty bacon helped accent the honey glazed mollusk. The bed of risotto made this quite the welcome kickoff to the meal....the usual amuse bouche, it was not.

As for pairings, I'm going to stick with that first course. On paper, it sounded to me like it would be a winner, and it didn't disappoint. While the scallops were certainly cooked, my dining companions agreed that it was much better than the alternative of being undercooked. The flavor coming from the bacon and the honey, held up by the starchiness of the rice paired so perfectly with the honey-nuanced mai bock. On its own, the mai bock is one of my favorites at UBW; paired with this dish, the beer became deeper and more flavorful.

The lightly battered calamari rings with the lager was a surprise pairing that also pleased. The simple, perfected flavors of the lager matched nicely with the light oil/fry flavor and the tomato dipping sauce. Pairing with tomato is no easy feat.

I wouldn't normally comment on a sorbet course, but the coffee sorbet with the dry, roasty Round Boy Stout was a very nice match.

I normally end most beer dinner reviews with some high praise, and a picture of course, for the decadent chocolate dessert. Well, you get the picture here at the bottom but, surprise!, this time no chocolate was involved in the dessert. Whether it was rum, brandy, or some other liqueur drizzled through the sauce and ice cream it was a delicious end all the same to a great meal. The Wobbly Bob, perhaps my second favorite UBW brew, was paired with it, though I think it secretly longed for a chocolate companion ;-) 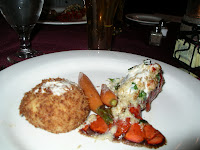 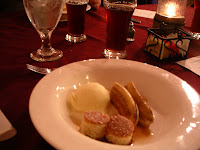