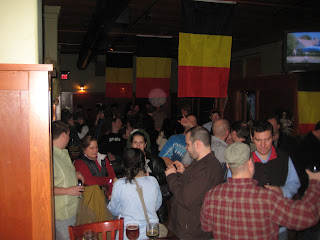 Let's see, it was something like 3pm when I arrived at Iron Hill in West Chester. If you don't what was going on, check back over here for details and a taplist. When I arrived, a good five or six kegs had already hit the road. The crowd was teeming and I was thirsty, so I grabbed an Otay (Nodding Head) from the front bar.

Great move on the part of Iron Hill to set up some brews at the front bar to give the impatient types (or agoraphobics) a chance to get a fairly quick beer. Both the front and back bars were packed, as was the main and side dining rooms. Everyone appeared to have a strategy: pick a table; pick a barstool; or pick a piece of standing room. Any way they went, everyone need to be ready to call out a beer, because they were flying off the taps quickly and furiously. 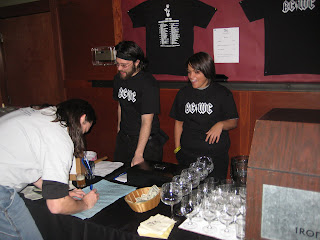 When I left at 6pm, only a handful remained, including PBC's Fleur de Lehigh (with wormwood, no less) and a couple of Iron hill beauts (Heywood and Cannibal) in the far back. Other than this, what can I tell you? I only had 5 or 6 beers (and numerous "sips"), so it's difficult to tell you which were best of almost 30 beers.

I did really, really enjoy the Cannibal (of course), the Harpoon Hibernian, and General Lafayette's sour strawberry beer, called Bière aigre de fraise. Actually, after having been given several glassfuls, samples, and tastes of various "funked up" beers, the General Lafayette's beer, full of tart fruit flavors could have been right up there as my favorite of the day.

Oh, and in the spirit of not breaking any new news, you'll need to check over here for news (link forthcoming) that I may have been early to receive, but needed to wait in the pecking order to distribute. A tease of an Iron Hill shuffle (not to be confused with Lido, Icky, or East Street) for the time being will need to suffice.

p.s. Jack was there longer than I was (though better behaved than last year, so alas no incriminating pictures), so I'll link to his review when he posts it. oops, right on cue, here it is. It's a good read, with more newsy tidbits than I have but, then again, what else would you expect from a good beer journalist? (gotta get in a compliment every once in a while)
Written by Bryan Kolesar at Sunday, January 25, 2009