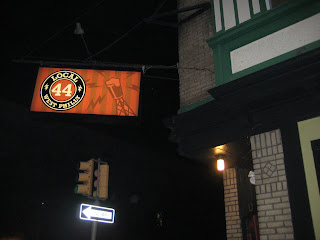 What a perfect evening to make the trek from 30th Street Station to 44th and Spruce, home of the new Local 44. It was a crisp and quiet night in the city; well, maybe not anywhere a Mummer could be spotted. Brendan and Leigh (of Memphis Taproom fame, if you haven't been around for the past year or so) wasted no time in getting the new year off to a roaring great start. On our return Amtrak train trip from our NYC neighborhood-hopping New Year's Eve trip (much more on that later), I jumped off the train (after it stopped) in Philly and Patty (yes, I'm outting her here...sorry hon) continued on home. Walking from 30th Street Station to 44th and Spruce with my brisk pace and six foot two frame's accompanying legs got me to Local 44's front door in around 20 minutes. A more "average" pace could get you there around 25-30 minutes. On the other hand, a cab return that I took to 30th Street Station cost between $7-$8, before tip, and took approx. 5 minutes. Other easy ways of getting to Local 44 from Center City include the 42 bus (through Center City on Chestnut and Walnut streets) which will drop you less than 15 feet from the front door on Spruce Street and the 34 trolley (connecting the Convention Center to West Philly) which drops you two blocks away over on Baltimore Avenue and continues on to Dock Street's front door as well.. 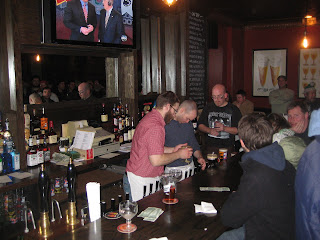 (there's Kevin posing with two tall lovelies against the far wall)
Which gets us to the first point of business here. Local 44 is the neighborhood's new "local" on 44th street. It may not be the most convenient for some of us suburban beer hunters (apologies to The Beer Hunter) or other far-flung beer aficionados in search of good beer. But, in this beer-rich region, most of us, no matter our locale, have our own local. Some areas, of course, more so than others...but the gaps have certainly filled in over time. The far-westerly "rural-suburbs" have Union Jack's, Ortino's, and now Craft Ale House. Montgomery and Chester Counties received its riches perhaps longer ago than other suburbs and have been well-documented by myself and many others. Bucks County is coming along, slowly. ....And, Delaware County is, well, Delaware County. Lest I give New Jersey the cold shoulder, even some of the close Philly suburbs across the river are beginning to pay some attention to better beer. But, this is West Philly's Local. To be fair, they're joining Dock Street, roughly nine blocks further west in defining the meaning of local and giving their respective neighborhoods in the City something good to drink. 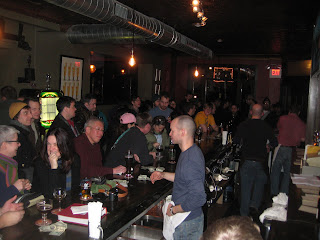 Lew Bryson has already said much of what I would have said about my visit last night...which proves a good consistent theme. I'll ask you to jump over and check out his capsule on the evening. Funny how even our pictures are almost identical as well. So it appears that he and I were two passing beer vessels in the night as I left just before 7pm. He didn't mention how many familiar beer faces that he saw. When I arrived, I immediately recognized our friend in cask, Kevin...familiar beer hound Bill...and Tom Kehoe from Yards. Other than that, nary a familiar face. Not even the kind of familiarity like "oh yeah, I recognize that guy/gal...they're at all the festivals." 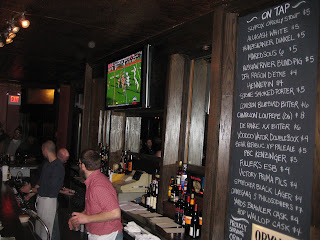 That's what, to me, will make Local 44 successful. While I have no doubt there were a few BAs, RBs, and other assorted usual beer geeks/lovers in attendance, this appeared to be a crowd of locals who came out to support the grand opening of their new neighbor. A crowd is putting it mildly; the joint was packed while I was there from 5:30pm-7pm. And, that's pretty refreshing. Oh, and for the record...you see the tap list in one of my pictures. I started with the Brawler from Yards on cask (I'll need to have a couple more run-ins with this beer to give a better opinion of yet, i.e. not sold yet), followed with a Victory Hop Wallop (a beer that lives and loves so well on cask!), and finished with one last hop blast---one of my favorite IPAs in the land, Russian River's Blind Pig. 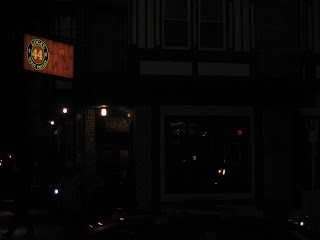 I only saw two people I recognized, aside from Brendan and Leigh. I was struck by that, too, and like you, encouraged. Heard it was busy again yesterday.

I think the only thing that was missing was:

Thanks for the report, Bryan. It looks like they've nailed the pricing for the "local" concept as well. $5 for Russian River, $6 for Coniston... those are seriously reasonable prices.

Kevin, they just don't make the neighborhood pub the same anymore, do they?