Previously in the series...Be careful what you ask for (or expect) Midnight in the garden of Tompkins Square Going into a marathon day like we did on New Year's Eve, it can feel like it will never end (in a good way). Then, by the time darkness falls and later as the night comes to end, it feels like it all went by in a flash. We left the negativity behind from the last two stops and strolled on over to Hop Devil (& the adjoining Belgian Room) on the doorstep to Tompkins Square Park. It was somewhere around 10:30/11:00pm when we showed up and the place was filling up fast. I've been to Hop Devil numerous times in the past and have always been pleased with the beer selection. The couple of times that I've had food also left me satisfied to recommend Hop Devil as one of the better beer bars on Manhattan. They appear to have some sort of branding re-make underway, so a more complete review should be in order soon. 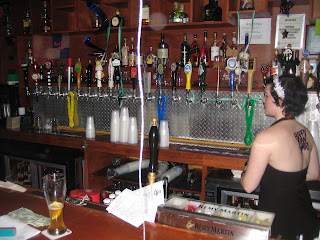 This visit was no different. Well, except this time it was only the beer menu and not the food menu that we sampled from. Balloons were awaiting overhead, party hats and horns were being distributed, and saucers of champagne were being poured in anticipation of the stroke of midnight. While I did take the champagne, it was the glassful of Pennichuck aged Russian Imperial Stout from the tap that I made sure to toast with at midnight. I'd only just caught wind of this beer in the last month or so and honestly don't know much of anything about Pennichuck the brewery (near Nashua, New Hampshire). What I do know, bushie, is that this one heck of a beer. Further, what I have learned from cruising their website's history page is that they have the bottle labeling machine from the Heavyweight Brewing Company, formerly of Ocean Township, NJ. 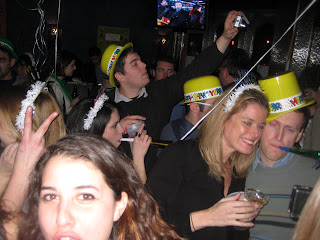 Remember the T.U.D. during last year's Philly Beer Week? The Totally Unnecessary (last) Drink? Once we finally left Hop Devil, we found it necessary to have that "one last drink." To be fair, only I had one last one, Patty abstained. A few doors up and across the street is St. Dymphna's, as in the Patron Saint of mental disorders, in case you're not up on your Saints. They must fall under the threshold for the smoking ban, because smoking was in full effect and a flashback to days past in Pennsylvania. 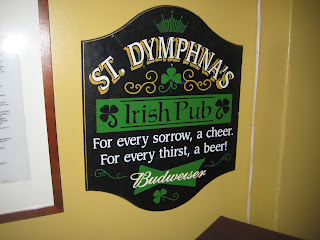 As you can see, and predictably I'm sure, the notes and the photos went downhill as the night went on. But, that's fine; living in the moment sometimes requires that I take the reporter's hat off from time to time. I've often wondered over the years if all the posturing for pictures of a birthday cake, a sporting event's action, or a wedding reception actually enhance the moments, preserves it (for what?) down the road, or just flat out leaves us vacant of understanding the meaning of a moment. There you have it. Roughly thirteen hours, ten stops (eleven if you include the Whole Foods Beer Store), a few interesting characters met along the way, and many good beers retired. Let's recap... Best Way of Getting to NYC from Philly: Amtrak- Without a doubt, if you've got the coin in your purse, opt for Amtrak over New Jersey Transit, and especially....please, over the car. There is absolutely no point in driving to or into NYC. The seats are more comfortable, the trip is around 90 minutes from Philadelphia's 30th Street Station making between 2-4 stops, and service is friendlier. Plus, when enjoying an on-board cocktail, Amtrak's smooth ride is much less likely to spill your drink. Bar Most Likely to Return to ASAP: Spring Lounge- the relaxed atmosphere, the quality beers could have you here for hours on end Most Surprising Find: Nolita House- serves the lesson that you should never pass up an open door without further investigation (well, maybe not every open door, use your best judgment ;-) My favorite New Beers found during my New Year's Eve: (1) Pennichuck aged Russian Imperial Stout at Hop Devil; (2) Duvel Green at Vol de Nuit; (3) Chelsea Hoppy Holidays at Spring Lounge Beer every NYC bar should carry: Blue Point Toasted Lager- great for beer geeks and newbies alike Lesson Learned (consumer): When a bartender not otherwise terribly preoccupied doesn't acknowledge you when you come in the door, or at the very least when you sit at his/her bar, leave immediately Lesson that should be Learned (bar owner): Every day is a chance to win new future customers. Supposing that this is actually part of your business plan, that you would put staff on duty for New Year's Eve that is either inexperienced or not enthusiastic about promoting your business is just plain dumb. Whether you call New Year's Eve customers "amateurs" or not, an impressed clientele is future business and should not be taken lightly. Here endeth my New Year's Eve rant for another 350 days or so. Best New Year's Day morning-after Meal: New York Burger Company- burgers made to order, fries, and fountain soda. Cured! Who's ready for 2010?
Written by Bryan Kolesar at Monday, January 12, 2009

You mention the Blue Point Toasted Lager. In case you ever have a craving and don't want to schlep to NYC (heaven forbid!), they have it on tap at the Pickering Creek Inn in Phoenixville.

Thanks for the tip; it's now officially 'on the list.' A schlep to Phoenixville is alright in book anytime