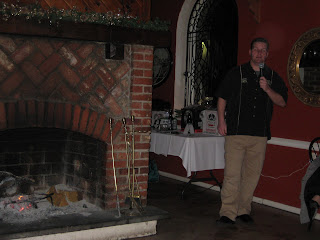 Villa Capri was originally a pizza place and later, in 1983, expanded to a restaurant. The restaurant has been in the Mannino family for 41 years and Matt Mannino has been operating it for the past 18 years. Ten years ago, the bar was added. Recently, better beer has been popping up at the bar and in the cooler.

I caught their second attempt at introducing well-crafted beer to its customers earlier in January. They'd hosted Oskar Blues the first time around and are looking to have them back again, along with Dogfish Head and "something organic" over the next few months. The plan will be to do a craft beer night on the second Thursday of each month.

Our trip to Doylestown was a breeze considering the event began at 9pm. No traffic, no fuss...just a quick trip 35-40 minute trip from home to Villa Capri.

Lee Marren, late of Spinnerstown and Legacy Brewing, was on hand as Stone's (California) Mid-Atlantic sales rep. He was pouring Pale Ale, Smoked Porter, and Arrogant Bastard paired with slices of Villa Capri's Chicken Alfredo, Proscuitto & Artichoke, and Taco pizza. At $10, the price was just right. On top of the 5 or 6 (?) ounce tastings and the pizza, there was a bomber bottle of Stone given as a nice little takeaway as well. 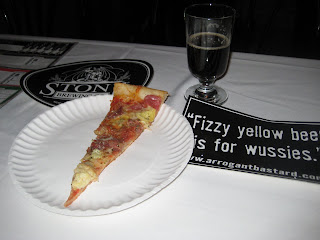 I got a kick out of, in lieu of a missing case of Stone IPA, Peroni was instead substituted. This was just after I picked up a sticker from Lee's table of marketing schwag that reads: "Fizzy Yellow Beer is For Wussies." Not that Peroni is terrible, just in no where near the league of any of Stone's offerings.

Around 15 people were there to sample food and beer pairings. I figured for an establishment just beginning to do this sort of thing...and at 9pm on a Thursday night...that this was a respectable showing and bodes well for future tastings at Villa Capri.

They were the first pizza place in Doylestown serving Italian food. The ambiance is nice, too, for kicking back with some good beers and Italian food. They offer patio dining in the nicer weather and cozy fireside dining in the winter months. The ski chalet-like hearth keeps the fire burning to create a comfy dining environment.

They also cater and have a full service bar looking to expand to more craft beers. (In the cooler on the night of my visit was Flying Fish, Stone, Oskar Blues, and Sierra Nevada). Not to be left out, a wine tasting with Sand Castle will be conducted in February. Another reason to check out Villa Capri is the Live Piano taking place during First Fridays in Doylestown.

I have very little experience in Doylestown; this is one place I'd be comfortable in recommending.
Written by Bryan Kolesar at Tuesday, January 27, 2009