The Background There are more, contrary to popular belief, than two ways to celebrate New Year's Eve. There's a certain wisdom to staying home and celebrating under the safety of your own roof. Or there's the idea of going out and tearing up the town, acting like an idiot and endangering the happiness and well being of those around you.

Then there's my approach which involves being out, having a great time, and not hurting anyone in the process. It amazes me how many quizzical looks I get about my plans for being out on New Year's Eve, let alone in New York City. Fact is, I can and do run into "idiots" on the other hundred times a year that I go out, so why should New Year's Eve scare me away from going out? And why should the fact that I find it cause for celebration to mark the passing of the year be a strange concept? The point of "going out" often is to celebrate something, right? Of course it's just another digit on the calendar, but how many times do you find yourself out on the town for really no reason at all? Now driving on New Year's Eve is a different story, and I can certainly understand why, if that's the only option for transportation, that people will want to shy away from going out on New Year's Eve. If that's the way you must go out on New Year's Eve, particularly if you're planning to "light it up," well now that's a whole nutha conversation that we're not even going into here.

That's why it was off to New York City for Patty and me. Times like New Year's Eve last week remind me of why I love living in this Northeast region of the country. From the big cities to the rural farmlands, from the mountains to the ocean and the bay, and all of the benefits of cultural diversity that this all brings, it's all right here for easy pickings in southeastern Pennsylvania.

It was the train ride to and traversing of New York City on New Year's Eve that reminded me of this. It's not that I take it for granted; it's just that it all worked out almost as perfectly as could be wished. It worked well in New York City and it works just as well whether we're talking about Boston, New York, Philadelphia, or Washington. From the Philadelphia region, only Boston is a bit of stretch. Within a few hours drive or a couple of hours on a train we can easily be in any of these magnificent cities. 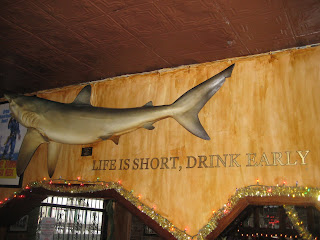 Train, to me, is almost always the best option. Then, when in the city, New York almost without argument can get you practically anywhere in four out of the five boroughs within spittin' distance that you'd want to go. Washington's METRO and Boston's T do pretty good jobs as well. And there aren't many spots that most of us would want to go to in Philly that SEPTA can't get you close to. Say what you want about the service aspect, if you want to get somewhere in one of these cities, some combination of the train, a taxi, and your legs can get you there without putting yourself behind the wheel of a car.

The Trek Begins But enough of this transportation blathering, or rant if that's the way it came off. On to (back to?) New Year's Eve. The dogs were dropped off at the kennel and Patty and I got ourselves on to the Amtrak train out of Paoli. Within a couple of hours, we were hopping the subway on to our hotel in the Chelsea neighborhood where we were able to get an early check-in. No tunnel delays, no road rage, just a smooth relaxing ride up the Northeast Corridor. So far, so very good. 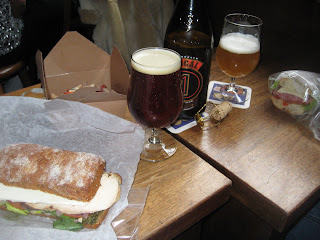 (Quite possibly the best start to any beer-drinking day)

The main objective of this New Year's Eve trip to NYC was to hit up as many places as possible that I haven't been to in the past. Or, maybe better stated, as few of the usual suspects as possible. We had a list of twenty or so places that made the list, a map, and subway passes; that's all we really needed for this mission...well, and warm clothing for the frigid night weather as well. There have always been these kind of places hanging around on my NYC to-do list and in the past they've always stayed there in favor of places like Blind Tiger (I'll bet some of you figure that I'm getting something from BT for all that I've written about them in the past.)

After dropping our bags at the hotel and freshening up, we made off to the Bowery location of the Whole Foods chain. Yes, I've written about my stops there before. The regulars of you here will recall the cheese shop, grocery store, great beer selection, and of course the growler filling station. Go back and read if you'd like to catch up; I won't go into any more detail here again. 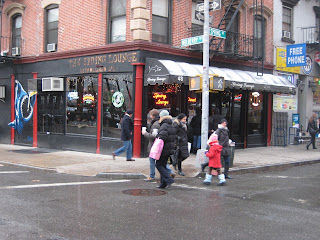 (Spring Lounge at the corner of Spring & Mulberry Streets)

We picked up some sandwiches and an accompanying side dish to head over to our first stop, Spring Lounge, on the corner of Spring and Mulberry, basically at the northern entrance to Little Italy. If you talk to serious beer geeks in the NYC area, you might get mention of Spring Lounge, but unfortunately casual observers tend to lose sight of Spring Lounge amongst the Hop Devils, Blind Tigers, Ginger Mans, Barcades, Spuyten Duyvils, and others of the NYC beer bar heaven. 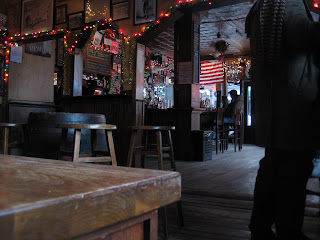 The First, The Best? Spring Lounge certainly set the bar high and early. What a gem. From 8am to 4am, if you want a good beer in NYC, Spring Lounge is the place to go. The bar, which has seen suds flowing since the early 20th century under various names, is just a couple of blocks south of Houston and across from the Disalvio neighborhood park.

They've been voted Best Place to Drink Before Noon by The L Magazine. Served in a comfortable no-nonsense environment with interesting people and decor to match, we were right at home at our heavy wood table and bench in the corner with a street-peeping view out the large window next to us. We were surrounded by historical pictures, toilet seats, sharks, and moose mounted on the walls...beer barrels serving as table tops...hardwood floors and exposed brick. 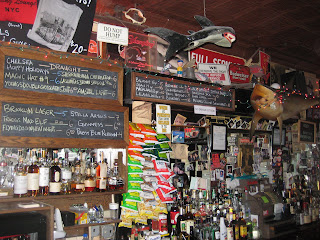 As I'd mentioned, unless you want a bag of chips from the bar, you'll need to bring your own food. With our sandwiches and side dish from Whole Foods, we got things started perfectly with a Brooklyn Local 1, a Chelsea Brewing's Happy Holidays, and a Lagunitas Brown Shugga. Perhaps a "big" way to start the day, yes, but there was plenty of food to chase the suds down. Chelsea Brewing was originally on our hit list for the day, but fell off due to logistical conflicts. But, fortunately, this was the one chance that I had during the day to have Chelsea on tap, and it sure did not disappoint.

One quick conversation overheard at the bar: Guy buying the beer: One's Stella and one's PBR Girl: Which is which? Guy: You'll need to figure it out. (girls guessed the same; both were wrong, go figure) The Great 2009 New Year's Eve in New York City tour was officially underway and we were happy… 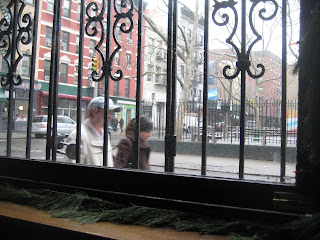 Up Next...Moving Along with a surprise pit stop and a visit with a few old friends (Part 2)
Written by Bryan Kolesar at Tuesday, January 06, 2009