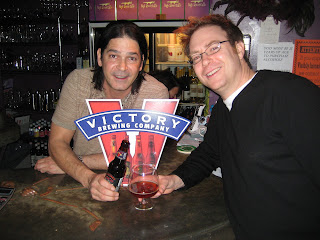 High Street Caffé in West Chester, PA is back on my radar. But, wait, you say; how in the world did they ever fall of my radar? Great question, one to which there isn't a great answer, or any at all. Do you have places that you haven't been to in a while that you can't explain why?

Well, it was Victory's Beer Dinner that they played host to this week at High Street Caffé that brought us back. Restauranteurs: Did you hear that? Do something a little different, maybe a beer dinner???, and watch the diners come out, perhaps some you haven't seen in a while.

This actually was HSC's first beer dinner in what proprietor Donny Syracuse promises will be an ongoing string of similar events. (For example, next up is Stoudt's. I'll be sure to bring the details to you here as soon as I get them.) And turn out the customers they did. Right around sixty hungry and thirsty patrons filled the restaurant. Well, to be honest, it was almost a full house sellout with room for maybe another 10-15.

Not too bad for restaurant dipping into the Beer Dinner Scene for the first time. Not that they're any newcomer to filling plates. Syracuse and executive chef Jay Wenner have been doing what they do together now for almost 13 years. This thing is cajun and creole just south of downtown West Chester and just north of the heart of West Chester University's main campus. Joining Jay in puttin on this event...behind the beer for this dinner was Lisa Wampler and managing the event was Kevin Coley. 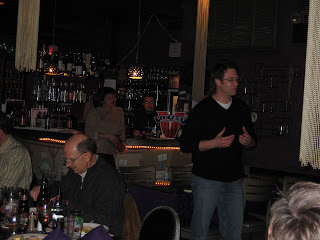 Patty and I attending this dinner continues in keeping with one of my objectives this year: to attend more "off the beaten path" beer events. This was qualified not because it was an unheard of brewery or restaurant, but rather because of their first time hosting a beer dinner.

Things got off to around a twenty minute late start. We'd arrived about 15 minutes before the scheduled 7pm start. But, with a Welcome Beer in hand, I don't believe that anyone minded the wait. While the kitchen was readying itself, Bill Covaleski and Tracy Mulligan from Victory worked the room personally welcoming each table.

It was the last time in the evening we waited on a beer. Bill officially got things rolling by introducing himself and giving a background of the Brewery. He was self-deprecating saying that the beer would be more interesting than he, but the laughs continued after that joke so I think he was doing just fine. 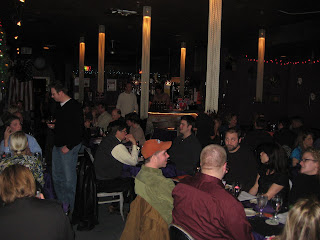 He and Tracy sat and enjoyed the dinner as well, getting up to mingle and answer questions a few times. Bill spoke to the room once more before giving the floor to (the ever-so-crafty) Tracy to distribute raffle winnings to a handful of lucky patrons (yours truly included, thank you).

So, how about those pairings you ask? Glad you asked!

The Lager was a perfect intro beer, especially considering that no beer after it was under HopDevil's 6.7% ABV. Oh, and did I mention that each beer served was a 12 ounce bottle per person? I'm not sure that I've had a full 12 oz. of Old Horizontal before, at least not in one sitting. The Baltic Thunder, come to think of it, wasn't a 12 ounce bottle...no it wasn't. It was a 22 ounce bottle...were we happy? You think? Well, actually, no one should probably be too surprised that we actually left some non-empty bottles behind on the table. Is that a beer foul or responsibility? 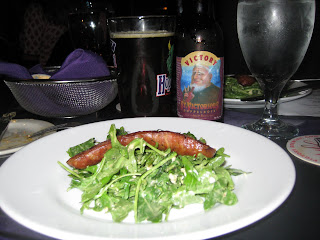 We got into our first course of mussels and Hop Wallop. Each was fine, of course, in their own right, but maybe a broth with ingredients packing a bigger flavor punch would have stood up better to the much more flavorful Hop Wallop. The second course, though, was where it was at. The doppelbock's rich malty flavors with a bit of smoke was an obvious winning combination with the smoked sausage and contrasted nicely with the sharp cheese and vinaigrette flavors in the bed of greens that it rest upon. 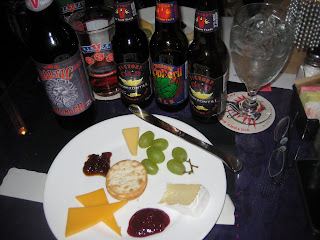 Then, my oh my, next came the Old Ho with the pork sliders. I've talked in the past about how well strong barbecue flavors can go so well with a barleywine or a strong Belgian ale, as two examples. This is a perfect application of that principle. The beer's hallmark big malt flavors and alcohol strength created the perfect complement to not only the tangy barbecue and the creamy cheddar, but also the fried onion ring and snappy cole slaw.

Then we came to...a dessert course in a beer dinner without chocolate? This type of thing, I suppose, is allowed to occur from time to time. Especially, when the chocolate dessert is replaced with cheese. Come to think of it, I suppose that I could look at the subtle chocolate flavor in the Baltic Thunder as the chocolate in my dessert course. There was so much talking going on during the dessert course that, while I ate most of the plate (and what was on it!), I didn't really pay close attention to the types of cheese or the exact pairability.

What I do recall, though, is the most important takeaway: cheese and beer are so wonderfully pairable. If you didn't already know this, please study up, you're missing out. Particularly in this beer, the maltiness and accompanying roasted, chocolate, and coffee flavors meld so well, while the hop bitterness and carbonation help to clear the palate of the creamy cheese.

Well done, High Street. You can bet that, barring any conflicts, I'll be back for your next Beer Dinner...Stoudt's you say, right?

Fourth Course ~ Victory Old Horizontal ~ paired with BBQ Pulled Pork Sliders, served with Tillamook Cheddar and carmelized onions, and a side of onion ring and slaw

What a great menu!