It all started a couple weekends ago when I was in Suffolk, VA. My brother-in-law, John, and I were talking about where to get some locally brewed beer. We were specifically looking for some Legend Brown Ale. Well that didn't take very long. In just a few minutes we were at a local Farm Fresh looking at their fairly impressive lineup of beer. Yes, that's right all you people from the Keystone State. I found Legend Brown Ale in a supermarket! In addition to the Legend Brown we picked up some Pete's Wicked Ale (hadn't had it in years), Magic Hat Hocus Pocus and some #9. 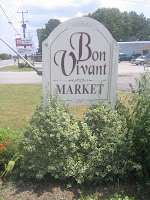 The next day I felt like the weekend was really humming along, from a beer perspective that is. I was pretty satisfied with the Legend Brown Ale, even though the bottles I bought for Bryan and Dennis were mysteriously missing. Ooops, I guess one more run to the grocery store for some beer was in order.

Even with all this success I was eager to find more local beer to bring back to PA. John was telling me about a friend of his that was into beer as well. He called him up and found out about this place in Smithfield, VA 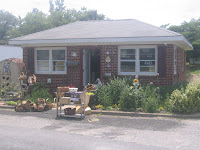 that had some really good stuff. I had a few minutes to jump on the web and decided to look it up. I found their website and at the Smithfield location they list all kinds of beer that just isn't mainstream, including a great selection of locals. Well that's all it took. We decided to make the 40 minute trek up to Smithfield and check out Bon Vivant Market. 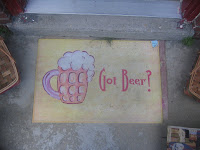 So imagine traveling over some country roads for over 30 minutes past the peanut fields and easing into the outskirts of town looking for an address. Not to mention using directions from an online mapping site. It didn't appear to be where it was supposed to be so we drove a little futher down the road and circled around again. "Wait, no that can't be it." Yes, in fact that was it. As you can see from the picture Bon Vivant Market is a very small place. In this case good things come in small packages. 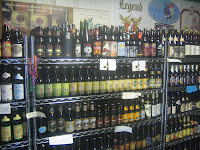 As I walked to the entrance of this informal little shop I was getting increasingly curious about what I would find. There were tons of baskets strewn among the wild flowers just outside the open front door. As I stepped inside and my eyes adjusted, there it was, the beer room. It wasn't big, but, boy was it chock full of all kinds of goodies! Check here for a pretty good list of what is available. The room is so small that I was immediately overwhelmed while trying to search for specific brands. 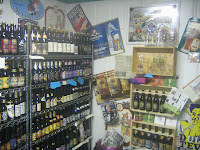 John and Lisa helped me focus and eventually had to tear me away, but, not before filling a box with some hard to find (in Pennsylvania) beer. I even picked up some interesting glassware.

Mike Adams really knows what to put on the shelves. Too bad I didn't get to meet him. Evidently he isn't there on Mondays. Maybe next time. If you're in the area (Norfolk, Newport News or Hampton) and you're looking for good beer this is a great place to stop!