Read all the posts for this installment of The Session
I've been to General Lafayette a couple times. I hadn't heard of it until Bryan pointed it out to me a couple years back. It really isn't that far away, but, it is toward Philly and well that's probably the biggest reason I didn't really know about it. I tend to shy away from the city. 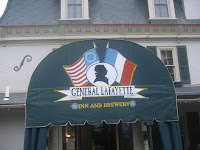 Some brew pubs have good beer and some have good food. A few have both. That is the case with General Lafayette. I'm not just talking lagers, red ales, and stouts. I'm talking Chocolate Thunder porter, The Phantom Barleywine, and Emperor's New Clothes Belgian Tripel. There are plenty of selections for the adventurous. Oh, you want a session beer? They have that too. Try the Churchill Mild at 4.2%. It packs some flavor baby. I'm not a foodie, so I won't get too much into the food except to say that it is not standard fare. Definitely a step above the average pub fare. 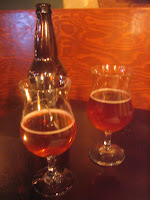 My favorite beer of the night was the Churchill Mild on cask. It had a light roasty sweetness to it. What can I say? I'm intrigued by a good session beer these days. Ok...Ok...the bottle of Emperor's New Clothes was second on the list. We also tried this tripel on tap. The bottled version was more delicate and a slightly tart. Last but not least was the Grim Reaper on cask. Reminded me of the Chocolate Thunder porter and really stood up well served slightly warmer with less carbonation.

So there you have it. Good beer, good food, ambiance, history, a place to stay, good beer and, er, good beer ;-) This isn't the kinda place everybody has access too. I'm thankful that we do.

Hopefully, you readers out there don't mind me, Bryan, jumping in here. I don't have much more to add to what Adam's already said so well about The General. It certainly was a great place to a pay a visit to on our Drink Local day of The Session. Thanks to GFC for hosting it this month. 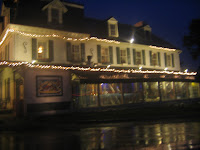 Funny how I mentioned 15 miles as the crow flies the other day. Because after we hopped in our car smack in the middle of rush hour on a summer Friday, it only took us about, oh, 50 minutes or so to get there!

After arriving, we bumped into both Chris Leonard and Russ Czajka who were more than happy to share with us the latest tappings and happenings at the pub. The dark pub and our little table in the corner provided just the perfect ambiance that you should expect when you go there. Exposed beams, nooks and crannies, and small rooms all contribute to the atmosphere. And, oh yes like Adam said, the variety of beers to cover the spectrum from session to high gravity, from fruit to hops, cask conditioned to CO2, and mead thrown in for good measure. 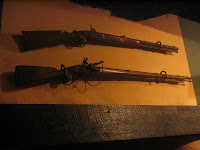 The food didn't disappoint. We started with Risotto Fritters and an olive tempanade. Then, we each had a sandwich and fries as a main course. To finish our meal we dug into bread pudding and creme brulee as a nice accompaniment to the '05 Tripel from their basement.

Often times we agree, but this time it looks like my order of favorite beers of the night is almost the opposite of Adam's. The Emperor's Tripel has to be at the top for me. Whether on CO2 or bottled and aged, the smooth and warming (but not so alcoholic) brew with the fruit that just jumps out as it warms was a knockout winner. 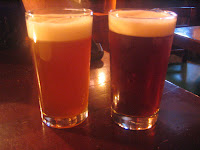 This was followed by the Ambassador IPA which delivered a nice hop blast in the flavor without much forewarning in the aroma. Yes, it might have been a touch "hot", but I must have been in the mood for that. Then, keeping with the hops theme I enjoyed the Pacific Pale and its nice fresh hop flavors. The Grim Reaper, depending how I think about it was anyone from 2nd to 4th. The nice roasty and bitter flavors layered nicely within this smooth cask conditioned beer. A bigger beer, but certainly not imperial, whatever that means! But, perhaps, I just wasn't in the mood for a bigger stout on this evening.

Lastly, if I was drinking one beer as a session beer for the evening, it would certainly be the Churchill's. It's only last here on my list because of the other more complex beers of the evening. But this mild was a nice beer that I enjoyed last weekend at Ortino's sessionfest and actually reminds me a bit of the Yards ESA or Pale Ale, with some nice fruit (apricot?) flavors in the finish.

Here's a rundown of what was on tap on June 1st along with The General's descriptions. Check the picture below for a listing of their vintage cellar-aged beers...also not to be missed. 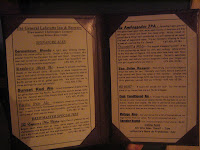 Raspberry Mead-Ale, 9.6% ABV, 9 IBU
Brewed to emulate the Honey Meads of the ancient Celts. 80 pounds of whole raspberries are used in each batch of this newly reformulated brew. Triple fermentation adds to the complexity and subtleties of this tasty, but unusual beverage.

Sunset Red Ale, 5.9% ABV, 22 IBU
As our brewmaster dreams of the sun going down over the Pacific, this medium bodied, malty
Red Ale was his first brew at the General. Caramel and toffee flavors blend with imported English hops in this extra smooth ale. Consistently one of our top sellers, the brewer spends a lot
less time dreaming of sunsets and more time trying to keep this beer flowing!

Pacific Pale Ale, 5.7% ABV, 37 IBU
A Western, American-style pale ale. Drier, hoppier, turbocharged version of this house favorite.
Hops from the Pacific Northwest provide the distinctive citrus flavor. A malty finish balances this incredible, quaffable ale. Trying to catch the Sunset Red, this has become one of our fastest selling beers (slow down people, I can't keep up!).

Churchill’s Mild, 4.2% ABV, 15 IBU
The magical disappearing beer! A sip of this enchanting ale leaves you with, well, nothing. While similar to the mild ales of England, this brew does have more malt flavor and alcohol content than its British cousins. The nutty sweetness, light body, and delicate texture evaporate before your tongue and your pint is gone before you know it.

The Ambassador IPA, 7.8% ABV, 99 IBU
Spreading hoppy good-will throughout beer-geek-dom, we’ve used a blend of American and English hops to bitter and flavor this classy brew. Nutty, robust imported Maris Otter malt contributes to a well mannered yet assertive beer of impeccable taste. Try our diplomatic offering to those in need of a serious hop fix. Cheers!

The Grim Reaper, 8.9% ABV, 65 IBU
This strong, full-bodied Imperial Stout has come for you. Chocolate and roasty flavors blend with high alcohol and floral hop notes in this monster. Complex and elusive, each taste brings forth new flavor experiences. Served in a 14-oz glass only, we must limit you to three!

The Emperor’s New Clothes, 9.1% ABV, 35 IBU
Spicy flavors produced by the Belgian yeast such as clove, white pepper, and coriander characterize this Belgian–style Trippel. Golden in color, high alcohol and a dry finish round out this sophisticated ale. Served in a tulip shaped glass, we must limit you to three!

Cask Conditioned Ale
Try beer the way the Brits drink it! Served at cellar temperature (approximately 55 degrees), the beer is unfiltered and undergoes natural carbonation and conditioning in the cask. Due to the brewer's diligent struggle for beer nirvana, we now have a brand new, DOUBLE beer engine. This should allow us to serve two distinct cask conditioned ales at all times - brewer's body willing. Ask your server which styles of beer we are currently serving. 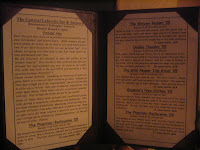