For Pete's Sake in Philadelphia, PA 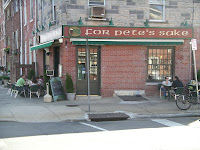 And, I'm talking about the kind of 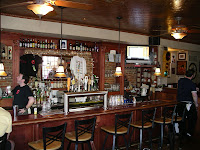 neighborhood joint where you can come as you are, no pretensions. Maybe, though, a little atty-tood if you look like you are not from around the block. But, once you're settled in, you get the kind of decent service you might expect in a close-knit neighborhood tavern along with some solid, dependable food. And, to cap things off, you're be able to have some excellent domestic craft and imported beer, with a good representation of local standouts.

In Philadelphia, you might cite Standard Tap, Old Eagle Tavern, McMenamin's, Grey Lodge Pub, and South Philadelphia Tap Room as these kind of joints (though you could argue against Manayunk and, lately, Northern Liberties too). Make sure you add For Pete's Sake to the list as well. Though they've been around for some time now, the beer list began to excel a couple of years ago. Read further down below for some of the more prominent brands that have been available on tap and in bottle during a couple of my recent visits.

Finding For Pete's Sake is not all too difficult. If you're travelling along I-95 through Philadelphia, you'll want to take the Columbus Boulevard (fka Delaware Avenue) exit and make you're way over to Washington Avenue, head west turning north on to Front Street, and go to the intersection of Front and Christian streets. There's on street parking, so get your parallel parking skills ready, unless you have one of those late model Lexus self-parking thingies. Or there's parking under the elevated I-95 roadway as well. 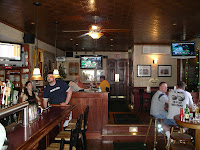 FPS sits nicely on the corner with street-side seating available on both sides of the building. Sure, that adds auto traffic to the ambiance, but you get the foot traffic too. Both of which, come to think of it, can provide some humorous street theater, if that's your thing. The interior floor space is split to two levels, the back level being where the restrooms are located. Overall, the place is not huge, but rather comfortable in an intimate way, though without being intrusive.

Speaking of restrooms, of which I've seemed to have had an affinity for lately, hmmm. But, I digress. Similar to the Grey Lodge Pub, there are numerous things on the walls in the restrooms here to help you pass the time while you're in there. You'll need to check it out for yourself. Moving along now.... 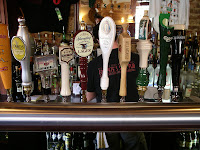 I have already hinted at the quality of the available beer at FSP. The staff's service level delivers just as strongly as the beer does. It's down-to-earth and as to the point as you might expect a Philly neighborhood tavern to offer. While they are not going to kiss your rear end, they do know enough about the beer and the food to be helpful in getting you what you're looking for.

So, what are you looking for? In terms of food, they deliver just what you might expect. Solid pub grub (burgers, wings, pulled pork, salads, and appetizers), enhanced just a bit with some more adventurous dishes like duck sandwich and tuna tacos. Needless to say, you won't go away hungry.

You've heard me praise the bars that ditch the TVs. In this case, I believe that FPS is the type of establishment that benefits from a few TVs. It's a classic pub environment and a few TVs showing various sporting events fits right in. Seems like there's always at least one European soccer (football? soccer? football? soccer?) game being shown. Apparently, it's also a popular place to catch the local Philly action too.