The Drafting Room & Troegs...perfect together! 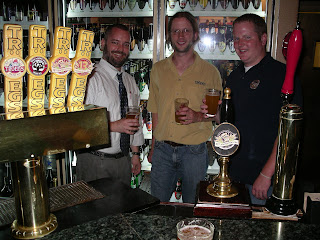 (L-R) Patrick Mullin (TDR); Chris Brugger (Tröegs Brewing Architect); Nick Johnson (Tröegs Sales) The Drafting Room turns 13 this year and Tröegs turns 10. Let's see...what to do with these numbers? Add them together and you get 23...Michael Jordan's number (except for that time he went off to fulfill his baseball folly). That's some pretty great company. Okay, one more numbers game. The Drafting Room currently has their newest anniversary incarnation on tap, the 13th Anniversary beer brewed to be a strong (imperial? double?) pilsner. Add that to the 11th anniversary (cask conditioned), the 12th anniversary (co2), Dreamweaver Wheat (4.8% ABV; 15 IBU) and Mad Elf (11% ABV; 15 IBU) makes 5 Tröegs beers currently on tap at The Drafting Room in Exton, PA. Enough of the numbers? So, how is this new anniversary brew you ask? Well, when you bring it to your nose, you're immediately greeted by a blast of hops. If you miss them, don't worry you'll find them again soon when you take your first sip. Is this maybe an IPA? (I heard the comparison to Victory's Hop Devil being thrown around last night.) It's just shy of an amber color with a nice soft white head. The hops and sweetness compete for your palate's attention. It isn't until the finish that I started to detect the lingering pilsner malt and lager yeast flavors. So, perhaps it is a lager afterall! In any case, it's a good drinking beer that may deserve a growler or two more of "research" during summertime TBL Firepit Sessions. (Pause. Did I gloss over too quickly just how good the 11th anniversary cask-conditioned IPA held up over the past couple of years? Better get yourself some of this first!) After discussions last night with Patrick and the fine folks from Tröegs, it seems that my reporting of 35 kegs per TDR location was a bit of stretch. Rather, you'll have to get there and try some before the 20-ish kegs in each location disappear later this summer. Happy anniversary to TDR and Tröegs! I'll leave you here with a fun bit that I lifted off the 'Who We Are' page at Tröegs website. I can just hear Simon & Garfunkel in the background singing "do-da-do-do, feelin' Tröegy" TRÖEGS (tr?gs) *v-tröeged, -tröeg'in the act of tröeg'in, ie "I tröeged it" or {slang} "that boy is tröeg'in" -adj. An aura of complete enjoyment and contentment, ie "My you look Tröegy this morning" -n. a new tradition of Pennsylvania specialty ales {from the brewers of Tröegs}, ie "I'll have a Tröegs!"
Written by Bryan Kolesar at Friday, June 22, 2007

The 13th anniversary was good. A definate winner. This is one of those beers that kinda fools you into thinking it is a session beer. Very drinkable. 7.4% abv I believe.

Great time last night. A big thanks to Troegs and Patrick at The Drafting Room.

Really scary to see Patrick in a tie!