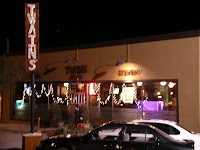 I should have posted this a few months back when I visited Twain's Billiards & Tap in Decatur, GA. It's just a couple of blocks away from my most favorite places in the Atlanta region, Brick Store Pub. They've only begun brewing their own beer in the past year, though they've been around for over 10 years.

I didn't stay much more then a half an hour, and only sampled a few of their brews so this will just be a 'quick review.' The first thing I was struck by when walking into Twain's was the industrial feel of high ceilings, metal, and wood. The second was the sports paraphernalia, especially hockey. I later learned that the owner is from the Philadelphia area and is a Philadelphia Flyers fan. In fact, the Atlanta Thrashers were playing a game that night and Twain's had a quite a crowd there to see it.

The brewpub generally had more of a working class feel to it on that particular night than Brick Store Pub. The BSP in my visits seems to have a slightly "trendier" crowd as well as a beer geek crowd. Twain's reminded me more of being in the upper level of the stadium during an Eagles or Flyers game in Philly. Not that it's a bad thing, just different.

Moving on to the beer. A quick sampling of most of their beers on tap that evening showed me the Jumping Frog IPA, the Hannibal Red Ale, and the Stranger Brown Ale were the best built beers. The stout and the ESB didn't quite live up to their style or deliver the flavor, while the Pale Ale and the regular IPA were a bit weak and a disappointment based on my preferences.

Keep in mind, this was all gleaned from roughly a 30 minute visit. During my next trip to Atlanta, I'd like to start my night at Twain's (then wind up at BSP) with some beer, dinner, and time on the pool tables (I didn't mention them, did I?) to give myself a fuller experience. Maybe I'll get some time with my Philadelphia brethren too. It seems like these guys are on the right track and compliment the Decatur landscape with something a bit different. If you've had a chance to stop in Twain's, let us know your opinion.
Written by Bryan Kolesar at Thursday, June 21, 2007