The First Rule About Monday Night Tasting Club is... 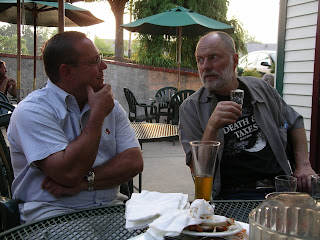 Pete Giannopoulos (Sly Fox) & Brian Hunt (Moonlight)
...that I don't normally discuss it. But, some times things are just too good to keep to myself. Like this past Monday night. Not only did the sampling table include beauts like Alaskan Smoked Porter, Three Floyds Dark Lord, Heavyweight Saison de la Soeur, Malheur Dark Brut, and Andechser Weissbier Hefetrüb brought fresh from Germany. (I felt so modest with my Big Fish from Flying Fish!)

But, a guest appearance in the form of Brian Hunt, brewer at Moonlight Brewing in Fulton, CA made the night one of the more memorable beer drinking nights of the year. Brian's a cool cat, a one-man brewing machine just outside of Santa Rosa putting together some of the region's best, albeit style-defying beers. I'm looking forward to seeing a couple of his brews featured during the Lagunitas Skunk Beer Train event this coming September.

I've experienced his Reality Czeck (one of America's great contributions to the style...wait, did I say 'style'?), Santa's Tipple (a festive warmer if ever there was one), and Death & Taxes (oh yes, indeedy, an almost perfectly crafted dark, but not heavy beer). For our little gathering, he bestowed upon us a small keg of his Bombay by Boat IPA. The fresh hops are just so evident (duh, of course) and so tasty. The Cluster hops used deliver low acid, but big big big flavor. A session IPA is defined from person-to-person, but for me with this beer at 5.9% ABV, I think I could drink this all night. (okay, in reality maybe it's a 3/4 session, not a full session!)

Thanks, Brian, for stopping in to see us. Too bad for us that your product doesn't find its way to most of us outside of California. This should serve as a reminder to all travelling through northern California in the Santa Rosa (see also, Russian River) to be on the lookout for your Moonlight beers.
Written by Bryan Kolesar at Wednesday, June 27, 2007

I think he's onto something with that green hopping ;-)

Not only is he a phenomenal, albeit humble and understated, brewer...but he's just the nicest guy to hang out with while shooting the proverbial geek talk his way.

Glad you guys enjoyed his company.

Did he once mention his LOVE of Cascade hops? Just checkin'.

When I left Victory to travel to the tasting session, he and Bill Covaleski were having a verbal love fest....both were just clucking away about beer and, I thought, he may not make it to the tasting. I am glad Brian was able to attend. Brian is truly a gracious, gregarious and fun guy and a very knowledgable beer guy.

Man, wish I could've been there. Glad to see (read) you guys had a good time. He's one hell of a guy. Dont know if you guys all deserved that keg of Bombay IPA...but whatever. ; )