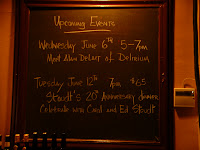 What better way to celebrate Monk's 10th anniversary than with a dinner celebrating Stoudt's, one of the region's stalwart and pioneering breweries (and some of the nicest people) which is celebrating its own landmark 20th anniversary.

Rush hour heading into Philly is normally no treat. That's part of the reason that we normally take a train. But, this time, friend and loyal TBL reader, Dennis, joined Adam and I for the dinner. He lives only a couple of miles from Stoudt's and often finds himself filling growlers, buying bottles for himself (and his TBL buddies), and picking up Eddie's bread for his dinners at home. That added to his desire to check out Monk's, for whom we rave about their dinners. Plus, he and I were spending the night in Philly and going to the Phillies afternoon game the following day. So, we drove.... 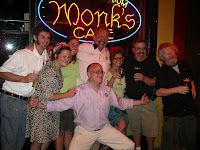 In the end, it didn't register much of a net effect. But, by the time we checked-in at the hotel, we walked through the doors at Monk's at 6:55pm. You gotta understand, I only live 30 miles away and it took a record 1 3/4 hours to get there. Thing is, everyone was affected by the ferocious thunderstorms that swept through the area. All major, and secondary, roads were clogged. The Stoudt's crew (that would be Carol & Ed, daughters, a brewer (Joe), and a sales guy (Sean)) got stuck on the turnpike and didn't show up until close to 7:30pm. By the time Adam got to the train and meandered his way into the city, he only got there a few minutes earlier. No matter, it was game time and everyone was finally on the field. 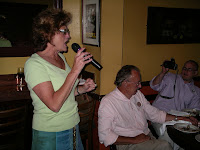 With introductions out of the way, Carol took the microphone and smoothly transitioned from hectic travel to relaxing beer dinner co-host. From the picture here, you might think she was getting the night started with the National Anthem. But, seriously, throughout the evening, she did just what I appreciate most about Monk's dinners. That is, the interjection of stories and anecdotes from the brewer along with each course of the meal.

Not that there's hardly ever a dud in the food menu and pairings during a beer dinner at Monk's, but I sometimes find the first and the last courses the most intriguing. Their first course typically wakes up the senses with a flavorful, but not overpowering, pairing of food and beer. This time was no different. The wasabi cream underneath the tuna and the sauerkraut helped to bring out some of the spice in the Pilsner. The Stoudt's Pils has always been a real fine example of a smooth German Pilsner with its subtle fruit and spice components. Just another example of why food and beer pairing makes so much sense.

And, the last course, well the last course is dessert and you know what that means! To my recollection, I have never complained about the dessert. Usually decadent and usually perfectly paired, it's almost always the grand finale in the fireworks display that is a Monk's beer dinner. Though, this dinner's final course was just a slight derivation on their last beer dinner's dessert, it was far from worth quibbling about. Plus, with the smooth cask-conditioned Fat Dog Stout (one of my long time faves from Stoudt's), well I need not say more.

In between, we enjoyed the maibock which redeemed itself from a slightly off bottle version of it that I had a few months back. Served along with the chicken terrine stuffed with (was it?) cherries, it showed off its solid body along with solid malt flavors, but still a very drinkable beer.

The Weizen was served with a melon soup that finished with a nice pepper kick that complemented the spice from the Weizen quite nicely.

The tripel is also one of my long time favorites from Stoudt's and was served with monkfish. At first, I thought it could be an odd pairing, but it was pulled off just fine, probably helped by the fennel and vidalia onion. 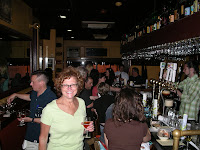 The new kid on Stoudt's block (no, not Union Barrel Works) is the Smooth Hoperator. I have no clue how long it will take to get the Sade song out of my mind. But, while it rattles around up there, I can continue to dwell on what style this beer actually is. Ed and I had a little back-and-forth on this topic after dinner. I'm not certain we came to an exact agreement, but I do agree with him that it is "Americanized." But, let's forget all that for now. It's a downright hop-forward beer and went well with the veal dish. But, geez, the veal was just so tender and flavorful (and I'm a big mushroom guy, so this course you might guess was near the top of the night for me) that I couldn't decide which I wanted more of, the Hoperator or the food on the plate. Ah, to wrestle with such decisions.

After dinner, I was happy that Adam had the chance to sample the Boon (cask 52) lambic, whose second keg was still on line. That and Cantillon Lou Pepe were new styles to Dennis. We had fun watching as his perspective on what exactly beer is turned upside down. He'd come over to the craft beer world years ago, but now has a new frontier after tasting these lambics.

How did Dennis fare over the night? Well, if words from him like "incredible", "great time", "overwhelming", "well worth it", "now I know why you guys rave so much", etc. are any indication...He lives a good hike from Center City Philly, so he won't be a regular wingman for these dinners, but I'll bet he'll be back again sometime not too long from now! Then, we took him to Nodding Head and Tria....stories for another day.

Sorry, if anyone was looking for a negative note on the night, you'll have to look elsewhere. Good luck!