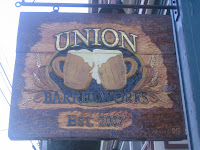 It was Saturday night. The weather was beautiful here in Southeastern Pennsylvania. A perfect night for a spontaneous beer trip. My wife and I jumped in the car and sped off to check out Union Barrel Works. (don't worry the kids were with the grandparents) Bryan has written about Tom Rupp (owner/brewer) and the coming of Union Barrel Works, Dennis helped us out with a photo during construction and Lew Bryson has had it on 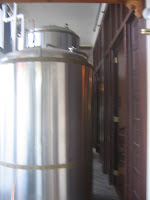 his radar for sometime. I finally got the chance to visit. While driving the forty miles or so talking with my wife I was hoping this new brew pub would be worth the trip. We hit the turnpike exited at mile marker two eighty six and dropped into Stevens, PA. The commute was actually a lot easier than I thought it would be. 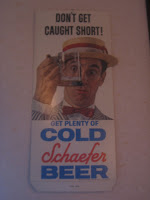 The building sits on the corner and fits right in with everything on the block. From the outside you can see the tanks and the beautifully carved wood sign out front. As you walk in you enter into a very large space that is much deeper than it is wide. Don't miss the Schaefer sign on your left. Further inspection reveals a clean and open space with barrels and barrel shaped items all around. My wife insisted on sitting at one of the barrels in the front section near the bar. Union Barrel Works is split into two sections. The front by the bar and the dining room in the back. 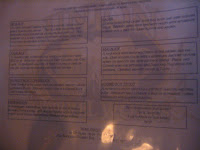 One of the bartenders came from behind the bar to serve us. We decided to start with the seven beer sampler. Guess how much it was? $4.50! You get two ounces of each one of their beers for the price of a pint. Not a bad way for one to test the waters so to speak. We each ordered a bowl of French Onion Soup. As we waited I whipped out the camera again and snapped some pictures. I noticed the tin ceiling, trim woodwork and columns. I spoke with Tom for a few minutes and he mentioned that he didn't let the architect touch anything on the ceilings that didn't absolutely need work. This obviously adds character and to the charm of the place and differentiates it from larger chain type brew pubs. 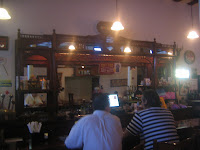 Soon the beer arrived. As you can see in the picture the samples were poured into these 2 oz. glasses and presented in a beer barrel shaped carrier. It didn't take long to get through them all. My three favorites are the Weizen, Dopplebock and Stout. I was very interested in the Kölsch and I even ordered a pint of it for good measure. Still it didn't stand out like some of the others. I'll be interested to see how things progress. All in all the beer was solid with plenty of attention to the lager styles. Here's the line up. I'll add some tasting notes later: Lager, Pale Ale, Wobbly Bob Dopplebock, Round Boy Stout, Hefe Weizen, Mai-bock and Kölsch. 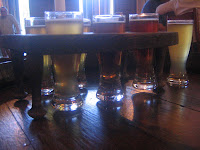 How did it feel inside? One word, open. Oh, did I mention that it is smoke free?! That's right ladies and gents smoke free. In fact as we were sampling the beer a group of four came in and sat down. One of the men was carrying on about the fact that there wasn't a smoking area. I was smiling to myself as the other three said, get used to it because that's the way things are headed. Then they proceeded to talk about how much they appreciated the non-smoking atmosphere. Ahhh...doesn't it make you feel good? 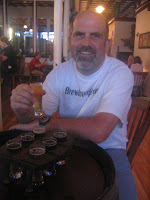 Well, we were winding down and getting ready to head over to Stoudt's. Hey, I don't get out in this neck of the woods very often ;-) We decided to order one last item from the menu, beer sorbet. Well I had to try it of course. I'm not sure what I expected though. I have never seen or tasted anything like it before. The bartender offered three flavors including kölsch, raspberry kölsch (new) and maibock. I really wanted to try the kölsch, but I wasn't sure if Lisa would like it so we took the bartender's recommendation and ordered the raspberry kölsch to share. How did it taste? You'll have to taste it for yourself :-p. I know I'll be trying it again the next time I visit. 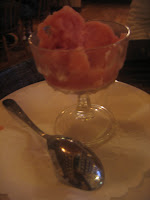 As I finished my beer we walked around a bit. Checked out the very clean brewing room through the glass. Moved down the hall to the dining area. On the right were some vintage pictures of this location from many many years ago. On the left you'll see a wall full of wooden drawers presumably from an occupant from an earlier era. Next to that there's a case where they have a few promotional items. I decided to have a pint glass added to the check and inquired about the hat with a built in bottle opener. Shucks, they were out of them. Maybe next time. 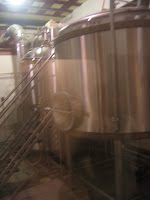 By now you know we enjoyed our stay. I appreciated the atmosphere, the good quality brews and the story. I'd like to know a bit more about this place. I'll bet these walls have a few more stories to tell. Evidently it used to be an old general store. Next time I'll have to have a run at the dinner menu as well. Oh, I almost forgot according to Tom there is a grand opening in the works too :-)

You didn't try any food? You really should have. The food is one of the best parts about the place.

Oh well, at least you have another excuse to go back now. ;)

We had the French Onion Soup. It was good. Unfortunately this wasn't a planned trip and we had already eaten.

We will be back :-) Without a doubt. What did you like about the food?

Well they brought out a free appetizer of olive tapenade which is something I never would have thought to try but glad I did.

Then for entrees I had the duck and my gf had the lamb shank, both of which were prepared beautifully.

What I liked about the food is that it is not what you would normally expect at a brewpub. Everything was very fresh and tasted wonderful.

That sounds great. We appreciate you sharing some details.

Anybody else been there and tried the food?

This is my new local, glad you enjoyed it.

The smoked trout chowder is great, as is the crab cheesecake(generous serving). The burgers are kobe beef, delicious. The chipotle scallop salad has just the right heat to it, tasty.

They should have the labeling issues sorted soon, so growlers available in the near future.