This year's installment of the guys hockey and beer trip to Pittsburgh came and went in the blink of an eye. In the past, it's been more like 4-6 guys for the weekend. This year it was yours truly and the Lancaster County Correspondent in all of about 38 hours. Not to say that we didn't make the most of it. 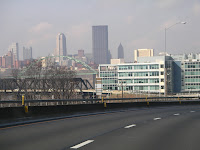 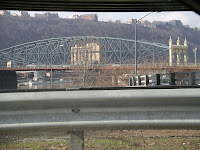 We headed out on Saturday morning and made it from Lancaster County to D's Six Pax & Dogz in the Regent Square area of Pittsburgh (just on the eastern side of Squirrel Hill tunnel) in just over 3 hours. We made it through a few snow squalls in the mountains with no problem and found a little more than an hour to spend at D's and setting up at the hotel before heading over to the Mellon Arena for the Penguins/Kings game at 1pm. 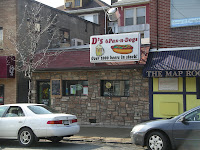 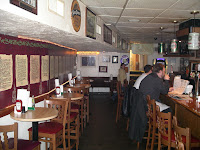 After a couple of dogs and our first pre-noon pints, we headed to the back "cave" at D's to fill up a 6-pack of beers, like Great Lakes and others that can not ordinarily be found in the eastern half of PA. Since the last time we were in Pittsburgh, D's has expanded by I'm guessing at least 100%. The restaurant area is now much more comfortable with some additional seating. The takeout area is a bit roomier and allows customers to more easily get around and find the beers that they're looking for. Plus, they've added a whole room on the front of the takeout area with hightop tables and separate checkout for the takeout customers. 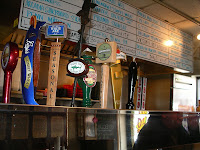 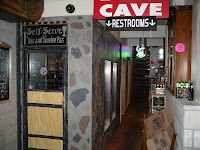 Even though D's is still a bit pricier than 3 Sons Dogs & Suds north of Pittsburgh up in Wexford, D's is now a much more comfortable place to hang out and buy some beers, especially when coming in to Pittsburgh from the east. 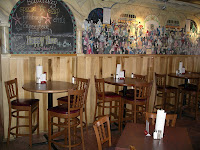 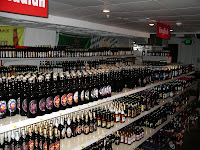 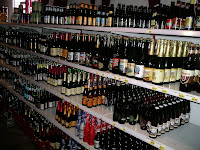 On to the hockey game, our ice-side seats were killer. I've never seen a hockey game from right up on the glass, especially in the corner where a lot of the mucking, banging, and fighting starts and finishes. Our friend who works with the team usually hooks us up with great seats somewhere in the arena, but these were one of a kind....or maybe one of a few hundred of a kind.

While visits to East End and Penn Brewing were initially in the plans, they were not meant to be this time around. We went out with our friend and his friend instead to Fat Heads for beers and dinner (every beer trip to da Burgh requires at least one stop in at Fathead's). As you can tell from the picture, the tap list is still as quality as ever, now with the welcome addition of Bear Republic. I did my best to add as many beers to my Frequent Flyer Beer Tour card. One day, I hope to learn just how many points, miles, beers, or whatever I've accrued to this card. Until then, they claim that the computer can not tell even the staff. Uh... 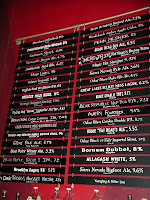 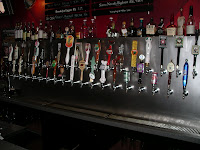 Anyway, after wings and other munchies and several beers at Fathead's, we wandered down the street to a new joint (well, at least new in the sense that I'd never been there) called Smokin' Joe's. I resisted the call of the Beer Union 6-pack shop and only walked out of Fat Heads with a keychain bottle opener. Ah, the willpower at work.

Smokin' Joe's. Now there's a name that tells you what you need to know. No doubt the smoking ban has yet to land in Pittsburgh. While the smoke wasn't oppressive, it was definitely noticeable. Not enough to kill the taste of a DFH 90 Minute as we settled into some darts. Pool tables, music, and a typical South Side type of bar atmosphere was the order of the night here. They claim around 65 taps or so. I never could get a good view of the bar and all of the tap handles spread out around the long bar to confirm, but perhaps they were hiding some taps around the corner. And, though I have a better picture of the chalkboard tap list, I thought the picture here was more humorous as one of our guys took the opportunity to relax against the board. I think I can almost make out some of the beer names...maybe if I hold it up to a mirror! 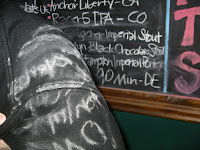 That about concludes the beer portion of the trip. We got in a good night sleep, poked around the hotel lobby in the morning with breakfast and meetups with some of the Flyers players (they stay in the same hotel), and checked ourselves out of the hotel.We saw the Flyers come up just a bit short against the Penguins in a semi-spirited game. Though, it wasn't quite the cross-state brawl we were expecting. Maybe the Old Time Hockey from the prior day took a bit out of them. But, with the young talent in Pittsburgh, it's certainly good to see the city with an exciting hockey team again packing the arena. Plus, with a new arena on the horizon in a couple of years, the state of hockey in Pittsburgh looks quite favorable in the near future.

We both kept it dry at the game since there really wasn't much decent beer to speak of. The temperarture had dropped into the 10F range, with wind chill, and snow had fallen, so we hit the road and fortunately made a very quick trip home. I'm thinking with a lot of these short trips that I make, I could start a series called "24 Hours of Beer in {City Name Here}". 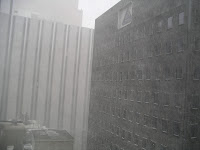 Oh, somewhere along the way here I neglected to mention our elevator ride with Mario Lemieux. No picture, sorry. 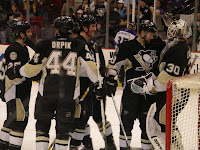 Did you hear? Myron Cope Passes

Sorry the East End visit didn't work out this time. Hopefully our schedules will line up better the next time you're out this way!