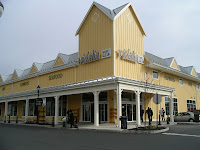 When I need to pick up some flowers and chocolate for my grandmother in Souderton and I want to have a new beer adventure along the way, what do I do? Well, I stop in Lansdale and check out the Vidalia Marketplace and take care of all wants and needs in one stop.

Vidalia has been on my radar for the better part of a year now. Lansdale, though, has been just a bit out of my circle; now I've come to be sorry that I've waited so long. While the prices run from reasonable to a bit pricey, one thing that cannot be argued is the selection and the comfortable marketplace environment. And, when you're in the route 309 corridor, finding a good beer selection is quite the prize. 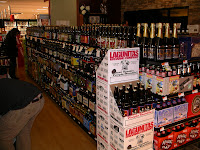 When browsing the 3 short aisles of single bottles, you'll find everything from small Trappist beers to large bombers of more varieties of Rogue than most have ever seen. Then, perhaps the biggest surprise was the $69.99 large bottle of Scaldis Prestige and the $29.99 bottles of Malheur Brut and Malheur Dark (marked down from $35.99).

Against the wall is a long cooler full of six-packs and more singles. The variety spans from the U.S. to England to Germany to Belgium, Mexico, China, Japan, and on and on. Unlike at a typical beer distributer, it's actually harder to spot the macros here. But, part of the game at Vidalia is figuring which bottles (like the $5.39 bomber of Stone Smoked Porter and $5.99 bomber of Bear Republic Racer 5) seem like good deals while others (like$15-$20 six packs of northeastern U.S. "average beer.") leave you wondering if it's worth plunking down the extra bucks for the benefit of getting a sixer. All we can hope is that they don't take too much advantage of the "hop crisis." It is good, though, to see that they taking an attempt at explaining the current situation to their customers. 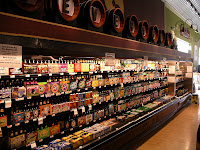 Believe it or not, the beer section was the last stop I made after making my way through the entire store. Vidalia on a whole sort of reminds me of a Whole Foods, not quite as totally organic, but with beer. There are full-service deli, fish, meat, and bakery counters along with the supply of the usual and unusual grocery items. Some Belgian chocolate, local honey, and local apple cider made their way home with me too. Oh, and my grandmother got a nice hyacinth and bag of chocolates too.
Written by Bryan Kolesar at Wednesday, February 06, 2008

That looks like a damn good bottle selection but I have heard some of the price issues before.

Would you mind grabbing me a few bottles of Local 1, Hanami and Festina Peche? I saw them in your picture.

Yah,uh, sorry about that. I was wondering how long it would take for someone to point that out